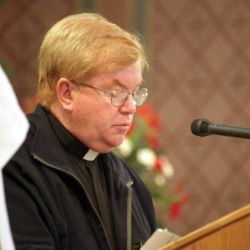 The sudden death of Brian O’Toole C.S.Sp. on All Saints’ Day came as a huge shock to his family, fellow Spiritans and all who knew him. Ordained in 1978, the 69-year-old had packed much into four decades as a Spiritan missionary priest – in his native Ireland and, in the 1980s and 1990s, in Ethiopia.

Brian studied in James Street CBS not far from his family home in Dublin before transferring in his mid-teens to Blackrock College, a Spiritan school, where he finished his secondary studies. The next decade saw him complete his training for the priesthood, gain his university degree, spend a year on missionary experience with his Congregation in Sierra Leone in west Africa and complete further studies, in New York’s Fordham University, majoring in Christology from an Orthodox perspective.

After a year in famine-relief work and having done language study, he and Abba Tewadadje, a priest of the Ethiopian Orthodox Tewahedo Church, began a joint Catholic/Orthodox first-evangelisation program among the pastoralist Hamar people in south-west Ethiopia.  To this day it is the only such program in the world.

Known as ‘Delbambi’ (“The Father who came to stay”), Fr Brian was involved, with others, in producing a 6,000-word English-Amharic-Hamar dictionary, the opening of a bilingual parish kindergarten, the building of 3 churches, including St. Mary’s under the patronage of Our Lady of Hamar.  In his final years in Ethiopia he coordinated Spiritan work in development in the south-west.

Returning to Ireland in 1999, he fulfilled a number of roles over the next two decades, including as Provincial Secretary for his Congregation and leading its work in the area of Justice & Peace. He brought his keen interest in the care of Creation to this role and that of Director of the Justice Desk of the then Irish Missionary Union. He was a dissertation tutor in the Religion & Ecology area at All Hallows College, served as a chaplain for many years to a nursing home and to Equipes Notre Dame in Ireland, a Christian movement for married couples, and was involved in inter-faith ministry.

From 2014 until his unexpected death, he managed the Spiritans’ Mission Resource & Heritage Centre in Dublin. In this role he oversaw the production of two volumes of Irish Spiritan necrology, facilitated research in Mission History and Tradition and had a busy program of future work lined up.

Fr Brian was buried in Mount Jerome Cemetery, a few miles from where he was born. He is greatly missed by his brother and three sisters, his extended family, Spiritan confrères and many friends.

At his Funeral Mass on Tuesday 10th November in Kimmage Manor, Fr Paddy Moran C.S.Sp. remarked that Fr Brian was a gifted communicator and an extraordinary linguist who brought his keen intelligence, wit and wisdom to all that he was asked to do and whose hope was that “all people would come to know that God is the God of the oppressed, a God who loves the unloved”.