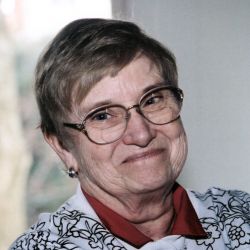 Medical Mission Sister Janet Gottschalk, age 91, transitioned to eternal life on Tuesday, January 18, 2022.  While still a young Sister, she was a nursing supervisor for six years in Venezuela, an experience that changed the trajectory of her mission focus.  Deciding against becoming a medical doctor, she instead dedicated her education and life’s work to social justice and public health.  She believed that the way to change the health status of people wasn’t through modern, medical care in a high-tech hospital, but through community-based medicine and through efforts in public health. She received her PhD in Public Health from the University of Texas Health Science Center School of Public Health in 1976 and went on to become a powerful advocate for women.  Her dear friend, Rose Berger, senior editor of Sojourners Magazine, shares, “She was a recognized authority and leader in public health around the world. And her students and coworkers never stopped calling on her for her wisdom, expertise, and incisive questions to keep their work grounded in the real experiences of women.” Ms. Berger added, “I'm glad her final assignment to Sector Heaven has come through so she can get back to work. We need her brilliance, commitment, unvarnished speech, and skilled organizing at work among the Cloud of Witnesses.”

Sister Janet was the first Sister to represent the Medical Mission Sisters (MMS) at the United Nations in New York.  She published two books relating to the history of the Medical Mission Sisters:  Drawn by God and She Stepped Out of Her Class.  She had 11 academic appointments and wrote dozens of articles on issues of public health and social justice.  Her participation in the World Conferences on Women reflected her deep, deep solidarity with women on the margins. She once said that her greatest work was teaching nursing students in Laredo, Texas on Cultural Competence and International and Border Health in which ‘Justice for all’ was a major concept. She stated that listening to the students’ changed world views and their commitment to justice and an end to world poverty was humbling and inspiring.

In 2004 she received the Ruth B. Freeman Distinguished Career Award from the Public Health Nursing Section of the American Public Health Association, the highest award this organization bestows. She also served in a variety of leadership positions for MMS, including a three-year term as our Unit North America Superior.

People were drawn to Sister Janet because she was not angry or embittered by her work.  She once said, “I have seen incredible violence, sub-human degradation and misery. Yet I have also been humbled by the love, example, and commitment of courageous people throughout the world.”

In 2018, distraught by public policies, Sister Janet inspired the formation of the Hot Topics discussion group in her residential setting.  In April of 2021 she moved to hospice at the Philadelphia Protestant Home.  She shared with several other Sisters that she was ready for her final journey to God; she passed peacefully Tuesday, January 18, 2022.