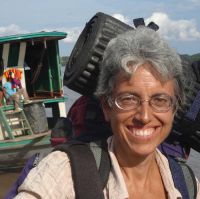 My reporting has taken me from Andean villages in the shadow of glaciers to indigenous communities in the Amazon suffering from oil spills, and from a migrant stopover in southern Mexico train yard to an ethnobotanical park off the tip of Tierra del Fuego. I came to Peru in 1989 as a lay missioner with Maryknoll, and have worked in grassroots communications projects, as director and editor of Latinamerica Press/Noticias Aliadas, and as a freelance journalist writing mainly on environmental, health and indigenous issues for publications including EcoAmericas, The Lancet, Nature, Science, Discover and National Geographic Online. I've covered the Catholic Church in Latin America for National Catholic Reporter and Catholic News Service, including Pope Francis' trips to Ecuador, Paraguay and Peru and the 2019 Synod for the Amazon in Rome. Follow me on Twitter at @Barbara_Fraser.

Church workers: Catholics must stand with victims in mining conflicts

Communities affected by mining — and church people working with them — draw strength from spiritualties that center on protecting what Pope Francis calls "our common home," according to members of the Churches and Mining Network, who met in Latin Ameria April 24–28.

Peru's Catholic bishops published a two-page plea to the country's leaders, urging them to address the current political crisis with "greater responsibility" and take "radical measures" to fight corruption.

How to celebrate a creation-conscious Easter

Easter not only holds God's promise of new life, it also reminds us of how closely our lives intertwine with all of creation on this planet that Pope Francis calls "our common home." Here are four ideas for how to incorporate creation care into your Easter celebrations this year.

Oil spills on opposite sides of Peru — one near Lima and the other in a remote Indigenous village in the Amazon — brought together Catholics in the two regions for simultaneous Masses as they marked the second anniversary of Querida Amazonia.

EarthBeat Weekly: 'Pursuit of climate justice is inextricable from the pursuit of racial justice'

EarthBeat Weekly: This Advent, can we start to break our addiction to plastic?

EarthBeat Weekly: COP26 results are still too little, though perhaps not too late

EarthBeat Weekly: Without enforcement, presidents' promises at COP26 won't save the world's forests

EarthBeat Weekly: 2 years after the Amazon Synod, are we any closer to ecological conversion?

EarthBeat Weekly: Can we overcome our society's addiction to consumption?

EarthBeat Weekly: Defending healthy ecosystems is a matter of life and death