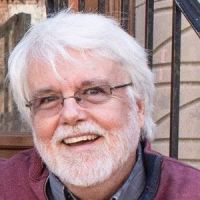 Bill Mitchell became NCR publisher in August 2020 after serving for a year as our first climate editor. He took on the additional role of CEO/President in November 2020.

Bill has taught journalism ethics at the University of Detroit and Northeastern University. He lives in Boston with his wife of 51 years, Carol, a clinical psychologist and spiritual director. They are the parents of three grown children and six grandchildren. You can reach Bill at bmitchell@ncronline.org or 816-968-2259.

EarthBeat Weekly: Nothing but blue skies - for now

EarthBeat Weekly: Solidarity key to addressing both the climate crisis and the pandemic

EarthBeat Weekly: Taking the pope at his word

EarthBeat Weekly: Catholics, climate and the choice for president

EarthBeat Weekly: The story behind the story of having kids amid climate crisis

EarthBeat Weekly: Speaking truth to power in a pink hoodie at Davos

EarthBeat Weekly: The planet as patient

EarthBeat Weekly: Parish survey -- What are you doing to address climate change?

EarthBeat Weekly: Stepping into the new year with hope -- and a question

EarthBeat Weekly: Listening to students (thousands of them)