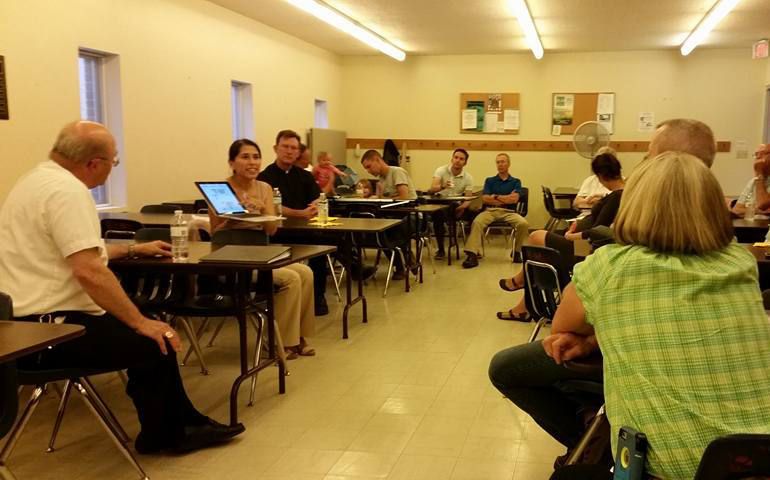 Cecilia Calvo, second from left, speaks at St. Ann Cathedral in Great Falls, Mont., Aug. 25 as part of a serious of dialogue sessions on Pope Francis' encyclical, "Laudato Si', on Care for Our Common Home." At each event, Bishop Michael Warfel, left, joined Calvo, who heads the U.S. bishops’ Environmental Justice Program and has presented roughly a dozen times on the encyclical since its June 18 release. (Darren Eultgen/Diocese of Great Falls-Billings, Mont.)
This article appears in the Laudato Si' in Coal Country feature series. View the full series.

The strong perception among Catholics in fossil-fuel regions is that a conversation on Pope Francis’ environmental encyclical, beginning with Paragraph 165 or its messages on climate change, will go up in smoke long before an ember of curiosity can ever begin to burn.

“You just have to take it as a given that certain things are sacrosanct, and a direct attack on coal is just not going to work in West Virginia, whatever the economic realities are,” said Jesuit Fr. Brian O’Donnell, executive secretary for the Catholic Conference of West Virginia.

As an alternative starting point, Glenmary Home Missioner Fr. John Rausch said it’s imperative to recognize that whether it’s an economic disaster or a mining disaster, “we’re talking about something spiritual, because people are devastated; their spirits are devastated.” In the absence of hope, he said, depression seeps in, along with it dysfunctional behavior and drug use (a growing problem in Appalachia).

“The church has got to be there in its greatest moment of compassion, and I think you could tie that into the encyclical,” said Rausch, who is based in Kentucky but has ministered throughout Appalachia for 40 years.

Dan Finn, the Clemens Professor in Economics and the Liberal Arts at the College of St. Benedict and St. John’s University in Collegeville, Minn., said it falls upon local pastors and bishops to educate themselves about “Laudato Si’, on Care for Our Common Home” and the science it cites, and then help people interpret what’s exactly going on.

“You have to try to help people in the area understand, first of all, understand what’s happening and why. And in this case, trying to explain why the pope is saying what he’s saying, rather than pretending he’s saying something that he’s not,” he said.

Another starting point arrives in a classic Catholic thought of gathering all affected parties to the table, said Bishop Michael Warfel, head of his own fossil fuel-reliant diocese of Great Falls-Billings, Mont. Locally, that would include the Crow tribe, whose 2.2 million-acre reservation in south central Montana sits upon one of the nation’s largest coal deposits.

The tribe lists the reserves in the Powder River Basin as its primary economic driver; in December, Crow Nation Chairman Darrin Old Coyote, along with Montana’s attorney general, defended its importance as a poverty escape hatch in a letter to EPA opposing the Clean Power Plan.

“It’s having good dialogue but also I think the dialogue eventually has to come to a decision,” Warfel said, “and one of the emphases that the pope has brought on in this encyclical is for the common good -- and the common good meaning the global community, not just one group of people.”

In August, the bishop took the first step by hosting dialogue sessions at four parishes in his mission diocese. Accompanying him was Cecilia Calvo, head of the U.S. bishops’ Environmental Justice Program, who handled the climate change portion of the talk.

Unsurprisingly, some in attendance didn’t see eye to eye with the pope’s conclusions on the subject. (The scientific consensus is the globe is warming and human activity has played a role.)

Since its release, Calvo has given nearly a dozen presentations on the encyclical in four states. In Montana, she tailored her discussion on climate’s impacts on another important state industry: agriculture. The local connection helped stir the Q&A portion on all sides of the climate issue as she stressed an integrated approach.

“We had some really good discussions around that,” she said. “So it’s a beginning.”

Other beginnings have emerged elsewhere. In southern Wyoming, Fr. Rob Spaulding has begun hosting classes on the encyclical. Back in Kentucky, Bishop John Stowe of Lexington views his August coalfields tour in line with the listening sessions undertaken by past Appalachian bishops who authored two seminal pastoral letters, “This Land Is Home to Me” (1975) and “At Home in the Web of Life” (1995).

Regarding Laudato Si’, Stowe said his role as a pastor begins with his own understanding of the teaching, so that he may “disseminate it in ways that people are actually going to be receptive to hear what is being said. To recognize the fragility of our planet at this moment in history, and that we all have a call to work for the sustaining of life-giving care of the planet and life-giving systems that are part of God’s creation.”

As part of that process, the Lexington diocese’s pastoral life office is prepping a Lenten discussion guide on Laudato Si’. Stowe hopes the additional time since its release (and accompanying media coverage) will help people “really try to get into the document,” to see how it connects to church tradition but also how it might apply locally.

In West Virginia, an ad hoc committee led by O’Donnell has surveyed parishes and schools of the Wheeling-Charleston diocese on their current “green” efforts. In Bishop Michael Bransfield’s words, the committee’s purpose is “to discover various ways they can take the encyclical and bring it to life.”

From there, the bishop will review the committee’s recommendations, and determine what can be done. When the diocese has the power to do it, like in its new LEED silver-certified chancery, completed in July 2014, Bransfield said it will take steps to implement environmentally conscious technology.

“That will be very high priority to us. To be honest with you, I don’t know how high a priority that is to poor people,” he said, noting that it wouldn’t make economic sense to take such steps in every parish -- for instance, those in poverty-stricken areas struggling to pay their bills absent diocesan assistance.