Cardinal Rodríguez at Georgetown: Without Paris climate deal, 'some countries will not have a future' 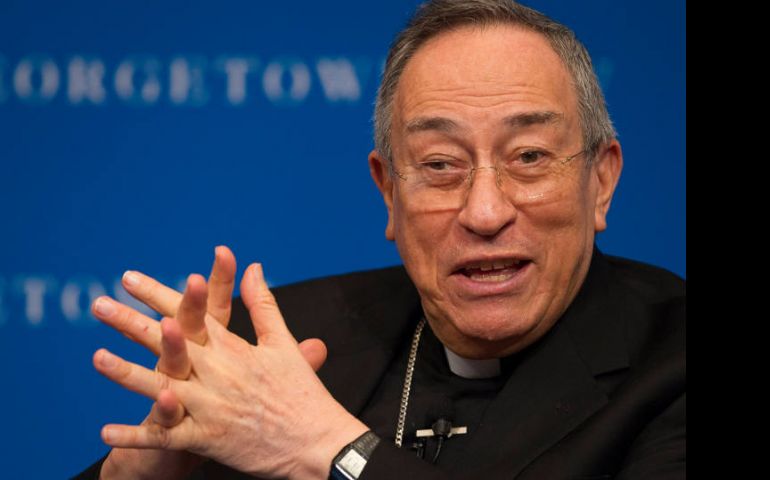 Washington — The Laudato Si’ U.S. road trip got underway Monday with Cardinal Óscar Andrés Rodríguez Maradiaga of Honduras stumping for the papal encyclical’s importance as a call to action and issuing a gloomy warning should the nations of the world not come to agreement over climate change in a Paris meeting at the end of this month.

Rodríguez spoke at Georgetown University’s Law Center on the first leg of a trip that took him to Fordham University Tuesday and will land him at the University of Notre Dame in South Bend, Ind., on Thursday. At the same time, another cardinal, Peter Turkson of Ghana, was in the United States visiting campuses and highlighting Pope Francis’s environmental message in “Laudato Si’, On Care for Our Common Home.” He was scheduled to participate in a community discussion at Ohio State University in Columbus, Ohio, on Monday and will open a two-day conference Tuesday at Santa Clara University in Santa Clara, Calif.

The visits by the cardinals became part of a series of events this week calling wide attention to the pope’s environmental encyclical issued in mid-June. The activity occurs just weeks ahead of a major round of international climate negotiations, formally known as the 21st Conference of the Parties (COP 21) to be held in Paris Nov. 30 to Dec. 11.

The two cardinals have become Francis’ de facto environmental ambassadors: Turkson as head of the Pontifical Council for Justice and Peace, and Rodríguez as one of the nine-member Council of Cardinals who advise the pope.

In a session with media before the Georgetown event, Rodríguez said unless the major powers of the world can come to agreement, “nothing will proceed” and he referred to the Paris conference as a “decisive meeting,” saying the world has no time to spare.

Rodríguez thinks the meeting in Paris will be a success. “It has to be,” he said, “otherwise, some countries will not have a future.”

The push for agreement by church officials is widespread. On Oct. 26, the heads of six continental Catholic bishops’ conferences, as well as the heads of the conferences in the United States and Canada and Catholic patriarchs of the Orient, all joined an appeal, released in Rome, to the negotiators who will be meeting in Paris. “We join the Holy Father in pleading for a major breakthrough in Paris, for a comprehensive and transformational agreement supported by all based on principles of solidarity, justice and participation,” said the appeal.

The statement, as is the case with the encyclical, places a heavy emphasis on the notion of common good and the understanding that elements of the environment are “global common goods” belonging to and shared by all.

Asked what he would like to see the Catholic church in the United States do to support the encyclical’s aims, Rodríguez said, “First, let it be known to the people of God.” He said in Honduras, the encyclical was printed in full in all the diocesan newspapers “so that even the poorest” had access to the document. He said that the parishes also held workshops conducted by lay Delegates of the Word to advance understanding of Laudato Si’.

During his formal presentation, Rodríguez spoke of politics as not only science but also service, saying politicians “must look past the next election, to the common good and to the future.”

One of the respondents to Rodríguez during a discussion moderated by John Carr, director of the Initiative on Catholic Social Thought and Public Life at Georgetown, was Edith Brown Weiss, the Francis Cabell Brown Professor of International Law at Georgetown and a member of the United Nations Environment Program’s International Advisory Council on Environmental Justice.

She said, “I think the encyclical offers a really important way of looking at the earth – think of it as a common home, that what we do affects others.”

Humans, Brown said, have to begin to change “how we perceive our relationship to the earth and to all peoples living today,” and she believes that in the encyclical, Francis proposed “the most fundamental change, the change in the human heart.”

The program was co-sponsored by Carr’s initiative and the Law Center’s Environmental Law Program and Climate Change Center and the Global Futures Initiative.

According to Brown, climate change brings into focus three themes that are critical issues in the encyclical: first, that earth constitutes a kind of “global commons”; second, that the poor “have been ignored” in decisions made about our common home and “must not be ignored”; and third, that future generations “must be considered in what we do about our common home.”

The encyclical, she said, calls on people to “adjust their notions of the good life” to “the new reality that there are limits” on the planet’s ability to deal with pollutants and the effects of human activity. Stating the matter as a moral issue, she said, “empowers people to act.”

The emphasis in the encyclical on climate change as an issue of human dignity can help build bridges among people who have diverse political views but who can understand we have a shared obligation, said John Podesta, a graduate of Georgetown Law School, former counselor to President Barack Obama on climate change and energy policy, chief of staff to President Bill Clinton, and chairman of Hillary Clinton’s presidential campaign.

Though he considers climate change “one of the most complex and urgent challenges that face our planet,” he is optimistic that that the world can achieve the kind of “new and global solidarity” described by Francis in the encyclical. Such solidarity, he said, “holds our common threads of humanity together.”

One of the stops on the recent papal trip to the U.S. that Podesta said received minimal attention but that he believes “the most important thing he did,” was Francis’s address opening the U.N. session on sustainable development goals. The pope, he said, placed the effort “in a context of not just climate and environmental degradation,” but also on how we are to build a sustainable future for all people.

“The need to build sustainable economies cuts right to the heart of the debate on this issue,” said Podesta, “because what we do or don’t do in terms of transforming our energy base in the future is going to mean the difference in whether people succeed or whether people fail, whether people can rise out of poverty or whether they will be pushed back.”

EarthBeat | Cardinal Rodríguez at Georgetown: Without Paris climate deal, 'some countries will not have a future'