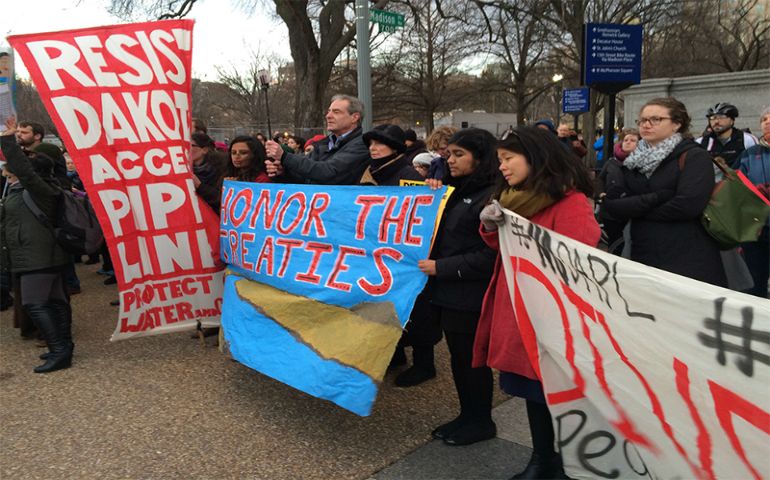 President Trump's executive orders advancing the construction of pipelines are drawing condemnation from the Native American and religious groups that have opposed them.

The Standing Rock Sioux Tribe issued a statement on Facebook saying the president's order Jan. 24 regarding the Dakota Access pipeline, to extend from the oil fields of North Dakota to Illinois, violated both U.S. law and tribal treaties.

"Nothing will deter us from our fight for clean water," said Tribal Chairman David Archambault II.

In a similar order on construction of the Keystone XL pipeline, which would bring oil from the tar sands of Canada to Texas, Trump said it would create "a lot of jobs, 28,000 jobs, great construction jobs."

The president also ordered all pipes used in pipeline construction in the United States to be manufactured domestically, saying it would "put a lot of workers, a lot of steelworkers back to work."

"We'll see if we can't get that pipeline built," he said.

To many Native Americans and others who have opposed construction of the Dakota Access pipeline, the movement was not primarily about jobs, money or energy. It was about protecting holy sites and water.

Shantha Ready Alonso, executive director of Creation Justice Ministries, a Christian organization whose members have joined the camps at Standing Rock, said they were "shocked" by the Trump administration's lack of regard for tribal sovereignty.

"As Christians we are committed to responsible stewardship of the gifts of God’s creation and to justice for our indigenous brothers and sisters," Alonso said. "We call on the administration to respect indigenous rights and the safety of drinking water for millions."

Kyle Meyaard-Schaap, national organizer and spokesperson for Young Evangelicals for Climate Action, issued a statement saying its members were "deeply disappointed" by the president's action, which they believe will damage recent climate gains.

"As evangelical Christians, we are committed to a vision of the gospel that understands that all things are under the Lordship of Jesus Christ, and that the entire creation is being reconciled back to God through Jesus. This commitment will always lead us to advocate for the well-being of all people and for the protection of God’s good creation," Meyaard-Schaap said.

The American Humanist Association, who also had sent members to visit Standing Rock and raised funds for the camps there, issued a statement condemning the executive action:

"It’s clear that the Trump administration’s idea of putting 'America first' doesn’t apply to First Americans indigenous to this land. As humanists, we stand in solidarity with the Standing Rock Sioux Tribe in their ongoing resistance against dehumanizing environmental and racial injustice."

As many as 8,000 people at one time have gathered in the camps in the hills along the Cannonball River in North Dakota in solidarity with the Standing Rock Sioux against the pipeline. On Jan. 20 the tribal council had passed a resolution asking people to leave the camps in the reservation's Cannonball District, noting the strain on the citizens and resources of the Sioux Nation and the work that will be required to clean up before the land thaws and floods.

And just last month, many had expressed cautious optimism after the U.S. Army Corps of Engineers denied an easement for the $3.8 billion Dakota Access pipeline under President Barack Obama.

Trump said the construction of both pipelines still is "subject to a renegotiation of terms by us."

The president had owned stock in Energy Transfer Partners, the company building the Dakota Access pipeline, through at least mid-2016, according to Reuters. His nominee for U.S. energy secretary, Rick Perry, was — until recently — a member of its board, it said.

Its chief executive, Kelcy Warren, also had donated $100,000 to the Trump campaign.