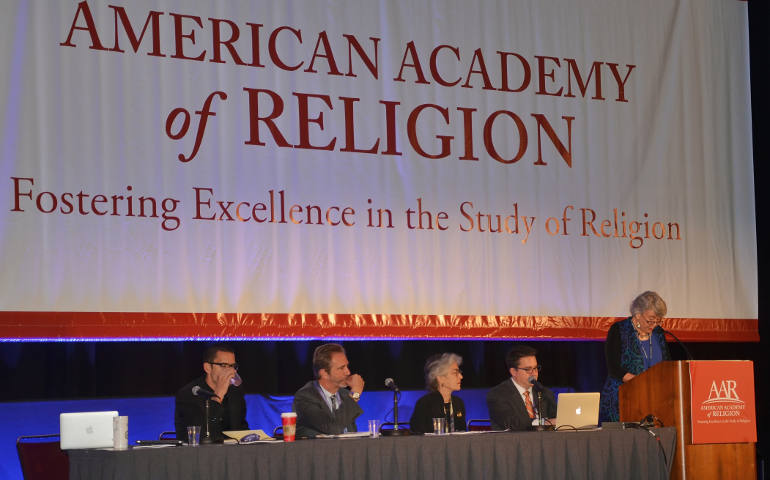 A survey released at the annual meeting of the American Academy of Religion and the Society of Biblical Literature Nov. 22-25 here reveals that people of faith do not consider climate change the most important issue facing the United States today nor do they believe they will be personally harmed by its impact. But they do see it as a crisis demanding governmental action now rather than later.

The survey, conducted by the Public Religion Research Institute (PRRI) in partnership with the American Academy of Religion, involved telephone interviews with more than 3,000 people.

The survey divided respondents into three categories: believers, who believe the earth is warming primarily because of human activity; sympathizers, who believe the global temperature is rising but attribute it to natural fluctuations or unknown causes; and skeptics, who insist there is no solid evidence that the earth’s temperature has been rising over the past few decades.

PRRI chief executive Robert Jones noted during a panel discussion of the survey results at the annual meeting that less than half of those surveyed (46 percent) could be identified as believers while the others surveyed were split between sympathizers (25 percent) and skeptics (26 percent).

“About half of those who don’t believe in climate change had an attitude based on their personal observation of weather changes around them,” Jones said.

There were significant differences in attitude based on partisan loyalties, and to a certain extent, religious and ethnic identities. Nearly two-thirds of Democrats are climate change believers, while less than 22 percent of Republicans could be identified as believers. About half of GOP respondents surveyed were labeled skeptics while only 13 percent of Democrats surveyed fell into that category.

Hispanics (41 percent) and black Americans (36 percent) are at least twice as likely as white Americans (18 percent) to anticipate they will be personally harmed a great deal by climate change. There was greater consensus that people living in poor developing countries would experience the greatest harm.

In a panel discussion by four academics with backgrounds in religion, ethics and environmental theology, David Gushee, a professor of Christian ethics at Mercer University and PRRI vice-chair, called the survey results “depressing.”

“Clearly our goal must be to make this issue more non-partisan and to turn sympathizers into believers,” he said. “I think the survey results also show evidence of substantial mistrust between religion and science, especially when science conflicts with faith and biblical authority.”

When questioned about the conflict between faith and science, members of every religious group except white mainline Protestants believe that science and religion are often in conflict.

“Clearly, we have a lot of work to do,” Gushee said. “The fact that 39 percent of respondents believe God would not allow us to destroy the earth reveals a devaluing of human responsibility and that is just bad biblical theology.”

Willis Jenkins, a religious studies and ethics professor at the University of Virginia, observed that climate change is a “wicked problem that does not have an obvious set of solutions. We have to look at the story lines that are represented in the response gaps between respondents from different ethnicities and look at how cultural values may shape the perception of risk.”

Laurel Kearns, an associate professor of sociology and religion and environmental studies at Drew Theological School, said the survey results reveal that the poor and people of color will be impacted the most.

“Look at the impact of Hurricane Katrina and Hurricane Sandy in our own country,” Kearns said. Noting that most Americans who attend religious services once or twice a month hear little from their clergy leader about the issue of climate change, she said, “hearing about an issue makes a difference.”

“It’s encouraging that people understand it will affect the global poor the most and that there is a willingness among people to sacrifice,” Zoloth said. “I think we have to ask how these results will transform our teaching.”

[Rosemary Johnston is a retired non-profit executive and longtime freelance writer who makes her home in San Diego. She currently serves on the board of directors of several faith-based non profits in the San Diego region.]