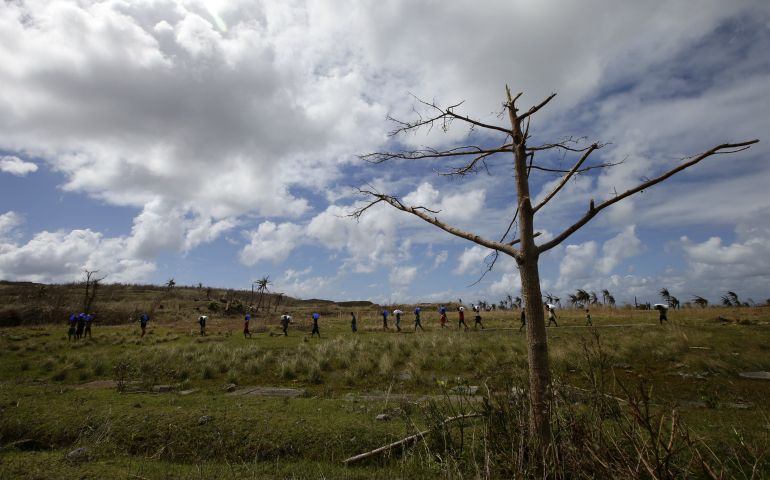 Filipinos are seen on Manicani Island in this 2013 file photo. Residents of the small island in the central Philippines celebrated a victory Aug. 18 after the government ordered a mining company to stop removing nickel ore stockpiles from their village. (CNS photo/Dennis M. Sabangan, EPA)

Manila, Philippines — Residents of a small island in the central Philippines hailed a government order that stopped one of the country's largest mining firms from removing nickel ore stockpiles from their village.

The removal of the ore was ruining local ecosystems, the residents said.

"We thought we'd see our island waste away first," Rebecca Destajo, a village leader on Manicani Island off the coastal town of Guiuan in Eastern Samar province, told ucanews.com Aug. 18 after the government announced its decision.

Opposition to mining operations on the island had been ongoing since the Hinatuan Mining Corp., an affiliate of Nickel Asia Corp., acquired rights to mine in the village in 1987.

The firm stopped operations in 1994 because of falling nickel prices, but resumed in 2001. Operations again were suspended in 2002 following local opposition supported by the Borongan diocese.

In 2005, the company was granted a permit to remove its stockpiles but residents protested, resulting in clashes with police.

Last month, a government audit found the mining company was taking too much soil and "disturbing the local ecology."

"They are taking soil out and it goes to China. We are suspending the retrieval of stockpiles, to address the ecological balance," Environment Secretary Regina Paz Lopez said Aug. 17.

"[The audit] did not follow the right procedures. They have not given us any opportunity to talk. We want to express our side," said Francis Malones, company spokesman.

The company has filed an appeal with the Department of Environment to lift the suspension.

The social justice group Philippine Misereor Partnership Inc. welcomed the government's decision, saying "it has been a long time coming."

"We acknowledge this unity among government agencies and peoples' organizations to protect the small islands," said partnership coordinator Yolanda Esguerra.

She said the organization next would seek to revoke the company's mining permit.

"It is now time that the government seek accountability from this mining company and ensure that it rehabilitates the islands," said Fr. Odick Calumpiano, social action director of the Borongan diocese.

"Many farmers were lured from their fields and went for the easy money in mining," said farmer Manuel Gagap.

"There might be nothing left for our children if they continue with it. We might end up leaving the island," he added.

The Hinatuan Mining Corp. had stockpiled 1.54 million tons of nickel ore on the island. It had exported 292,000 tons. The company claimed Manicani has a life of 13 years remaining and that 37 acres of a total of 2,879 acres had been mined.