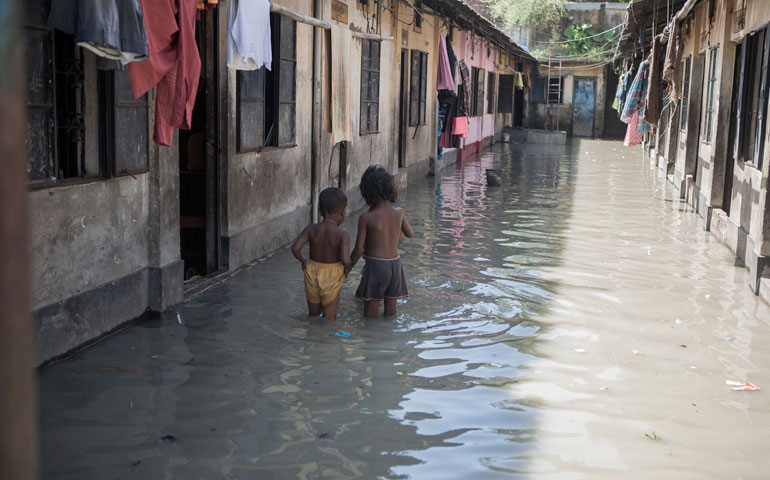 Climate change has begun to take a toll on Chittagong, Bangladesh, where tidal surge can affect the city as often as twice a day, resulting in frequent flooding. (Newscom/Sipa USA/NurPhoto/Jashim Salam)

It's hard to top being named pope and TIME's Person of the Year. Francis took the world by storm in 2013 as the first pope from the Americas, calling for Vatican decentralization, a synod on the family, and -- invoking St. Francis of Assisi -B- a "church of the poor."

But St. Francis was not only the champion of the destitute, but also the patron saint of ecology, and the pope might invoke that part of his namesake's legacy in 2014 by summoning more will and resources to address climate change that threatens all of creation.

The pope's appeal for a "new balance" in papal proclamations and governance have earned him wide acclaim. Nearly 90 percent of U.S. Catholics have a favorable opinion of him according to a recent Quinnipiac University poll. But while fresh air may be filling the church, the news on climate change is more stifling.

A recent United Nations report predicts the planet will exceed its carbon dioxide "budget" by 2040, and the International Energy Agency warns climate change will be irreversible unless solved by 2017. Plants and animal species are disappearing at the fastest rate in 60 million years, and super storms are carving up coastlines. Glaciers are melting and seas are rising.

But these gains are incremental, and presidents, prime ministers and party leaders are ill-equipped to address long-term challenges in the face of immediate economic, security and political concerns (see government shutdown). Leadership in other sectors like religion is required on problems demanding a universal, or catholic, response.

In seeking new balance in the church's focus on life, the pope could invoke his namesake's musings on nature. In "Canticle of the Sun," St. Francis sings, "Be praised, my Lord, through our sister Mother Earth, who feeds and rules us." He goes on to praise God for giving light through the sun, sustenance through air, and purity through water, all clean energy sources.

Scripture is replete with tributes to the environment from Genesis' story of creation to Revelation's condemnation of those who destroy the Earth, providing popes and paupers alike with plenty of reason to act in the wake of climate change. John Paul II himself cited the greenhouse gas crisis as early as 1990.

Francis could build on this by:

A pope may not be able to part water or walk on it, but he can help tame rising seas. By invoking St. Francis' legacy as the patron saint of ecology as well as of the poor, Francis can show that the white smoke that billowed from St. Peter's upon his election is good for the environment and TIME's Person of the Year is a pope for the ages.

[James Davitt Rooney is principal of Rooney Associates LLC, a London- and Boston-based consultancy. He holds a Master of Public Administration from Harvard Kennedy School and a bachelor's degree in ethics and political philosophy from Brown University.]

A version of this story appeared in the Jan 31-Feb 13, 2014 print issue under the headline: Pope can help focus concern for climate.