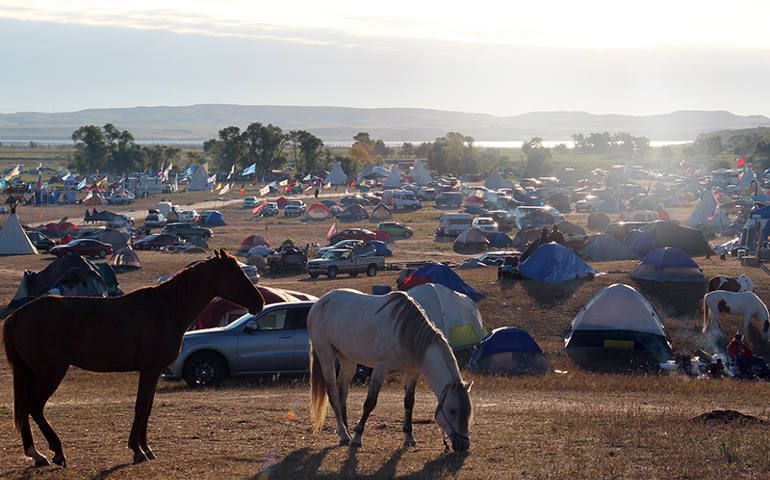 Horses graze early on the morning of Sept. 14, 2016, at the Oceti Sakowin camp near the Standing Rock Reservation in North Dakota, where thousands of people are camped in solidarity with the Standing Rock Sioux Tribe in opposition to the Dakota Access pipeline project. (RNS photo/Emily McFarlan Miller)

NEAR THE STANDING ROCK SIOUX RESERVATION, N.D. — It's being called “the largest, most diverse tribal action in at least a century”: scores of Native American tribes camped among the hills along the Cannonball River.

They’ve gathered in tents and teepees, and in prayer and protest, to oppose the construction of an oil pipeline, engaged in what both activists and religious leaders are calling a spiritual battle.

And they won a partial victory on Sept. 9, when the federal government ordered a provisional halt on construction near the Standing Rock Sioux Reservation.

What’s behind the opposition to the pipeline, and what makes it spiritual?

The Standing Rock Sioux Tribe has filed a lawsuit over a U.S. Army Corps of Engineers permit for the construction of a $3.8 billion underground pipeline that would run nearly 1,200 miles from the Bakken and Three Forks oil fields in North Dakota to an existing pipeline in Illinois.

The Dakota Access pipeline would transport 470,000 barrels of crude oil per day, according to Dallas-based Energy Transfer, the parent company of Dakota Access. It would reduce the amount of oil shipped by truck and train, providing safer transport of oil, the company argues.

But it also would snake through sacred sites on lands where the Sioux once lived and, according to the Standing Rock Sioux Tribe, a spill would "present an existential threat" since the pipeline would come within a half-mile of their reservation.

An estimated 8,000 people were camped along the Cannonball River this past week.

Camp coordinator Phyllis Young says members of 280 Native American tribes have come to express their support -- from as far away as Hawaii and Ecuador, according to the Sacred Stone Camp Facebook page. Many non-Native people also have joined.

So what does opposition to the pipeline have to do with religion and spirituality?

“You can’t separate spirituality from our everyday life," said Standing Rock Sioux Tribal Councilman Dana Yellow Fat. "We do everything with prayer.”

The demonstration began in April with a 26-mile prayer ride on horseback from Sitting Bull’s burial site in Fort Yates. Prayer continues at the camps throughout the day: in the morning and evening and at mealtimes, in vigils, in songs, in prayer ties knotted to fences along construction sites, in the sage and cedar and tobacco that is burned.

Standing Rock Sioux Tribal Chairman Dave Archambault II has mentioned visions and dreams by several Lakota and Dakota Sioux about “a black poisonous snake trying to come among us.” He has also cited instructions the Sioux believe the Creator has given them to care for the land, including the water and all creation.

“Mni wiconi” -- “Water is life” -- has become one of the rallying cries of those opposing the pipeline.

Mark Charles, a Navajo Christian and Washington correspondent for Native News Online, puts it this way: “The way most Natives feel about the land where they’re living is the way most European Christians (American Christians of European origin) feel about Israel. Why? Because that’s where their creation story takes place.”

Why are Christians getting involved?

“Ultimately, this is a protest about the stewardship of God’s creation and justice for the indigenous peoples of the Great Plains,” Ough said.

It's also about reconciliation, said Shantha Ready Alonso, executive director of Creation Justice Ministries. Many non-Native Americans participating in the demonstration want to acknowledge the injustices done to indigenous peoples by European Christians who took their lands and played a role in massacres of Native Americans.

“There’s a lot to confess, there’s a lot to repent and, in this case, this is an opportunity to stand with the tribe and affirm and follow their leadership in taking one more step toward reconciliation,” Alonso said.

Representatives from several Protestant Christian denominations, including the United Methodist Church, United Church of Christ, Episcopal Church, Presbyterian Church (USA) and Evangelical Lutheran Church in America -- as well as the Nation of Islam -- have visited the camps or spoken out against the pipeline project.

Editor's Note: Want more stories from Eco Catholic? We can send you an email alert once a week with the latest. Just go to this page and follow directions: Email alert sign-up.

EarthBeat | The 'spiritual battle' over the Dakota Access pipeline