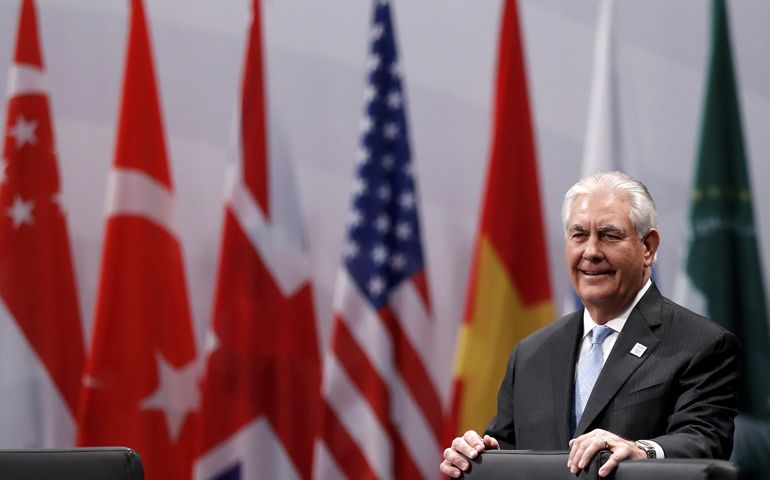 One letter from the U.S. Conference of Catholic Bishops addressed the Paris climate accord and the international Green Climate Fund. Another, organized by Catholic Climate Covenant, sought protection of U.S. Environmental Protection Agency's Clean Power Plan.

President Donald Trump, a climate skeptic who has referred to it as a "hoax," is expected as early as this week to order a rewriting, and weakening, of the EPA rules on emissions for coal- and gas-fired power plants. It remains up in the air how under his leadership the U.S. will participate in the two international efforts to address climate change.

The bishops' letter, dated Feb. 17 and written by Bishops Oscar Cantu of Las Cruces, N.M., and Frank Dewane of Venice, Fla., along with Catholic Relief Services President and CEO Sean Callahan, was directed at Secretary of State Rex Tillerson. Dewane is chair of the bishops' conference Committee on Domestic Justice and Human Development, while Cantu chairs the Committee on International Justice and Peace.

They urged the former Exxon Mobil CEO to keep the U.S. in the Paris Agreement and continue the country's support of the Green Climate Fund. The latter, which has a goal of $100 billion annually in financing by 2020 to developing countries to adapt to and mitigate climate impacts, has been a primary target of defense of Catholic environmental advocates in the first month of the Trump presidency.

The letter said the Green Climate Fund builds resilience and aids nations in recovering from climate impacts, such as more powerful and extreme weather events. "Such resilience improves lives and promotes stability and security," they wrote.

"Adaptation policy is fundamentally concerned with helping God's creatures and all human beings, especially those who are poor, to adapt to the effects of climate change, regardless of the causes," the letter stated. "From the perspective of Catholic social teaching, adaptation ranks among the most important actions we can take," listing hurricanes, floods, droughts, famines and water shortages as weather disasters that hit the poor and most vulnerable of society the hardest.

On the Paris Agreement, the deal struck in December 2015 binding 195 nations to limit global temperature rise between 1.5 and 2 degrees Celsius, the bishops and CRS president said the deal "is a key step" toward supporting not only adaptation and mitigation efforts in other countries, but also in cutting U.S. carbon emissions.

More generally, the letter appealed to Tillerson to lead the country beyond a narrow, politicized and ideologically driven debate on climate change, citing Pope Francis' encyclical "Laudato Si', on Care for Our Common Home," in which he affirmed the view that while natural causes and other factors have contributed to climate change, the vast scientific consensus indicates it has mainly resulted from human activity, specifically the burning of fossil fuels.

"This nuanced understanding of climate change, which you appear to share, creates space for reasonable people to recognize, without controversy, that the climate is changing and highlights the importance of adaptation in response," they wrote.

During his confirmation hearing, Tillerson said it was important for the U.S. to "maintain its seat at the table on conversations around how to address threats of climate change, which do require a global response." Under his tenure, Exxon Mobil first acknowledged the risks posed by climate change and also endorsed the Paris Agreement.

"Climate change is one more good reason for Christians to live up to what we should be doing in the first place," the bishops' letter stated, referencing Matthew 35: "For I was hungry you gave me food, I was thirsty you gave me drink, a stranger and you welcomed me."

"We have one common home, and we must protect it," they said.

Signed by the presidents of 24 Catholic colleges and universities, along with nearly 70 leaders of 50-plus religious orders, the letter called upon "state and federal elected officials to address the emerging climate crisis and lead the transition to renewable energy by taking legislative and executive action to meet and exceed the carbon reduction goals as laid out in the Clean Power Plan."

They echoed the past three popes who have all called climate change "an urgent moral issue that wounds creation, threatens human life and dignity, and disproportionately harms the poor and vulnerable who contribute the least to climate change." They also repeated Pope Francis in Laudato Si' stating the use of fossil fuels "needs to be progressively replaced without delay," and that there is an "urgent need to develop policies so that, in the next few years, the emission of carbon dioxide and other highly polluting gases can be drastically reduced, for example, substituting fossil fuels and developing sources of renewable energy."

Multiple reports have indicated Trump will issue an executive order in days that will order EPA to rewrite the 2015 Clean Power Plan rule, and another to rework the Water of the United States rule, which extends federal authority over 60 percent of the country's water bodies. The Clean Power Plan projected to reduce carbon pollution from power plants by 32 percent compared to 2005 levels by 2030. The plan remains on hold and under review by the U.S. Court of Appeals for the District of Columbia circuit after 27 state attorneys general — including new EPA Administrator Scott Pruitt — contested its legality. Some analyses of power-plant coal consumption and new power generation have found the country ahead of pace on curbing carbon emissions and coal use, even absent the rules fully enforced.

Beyond its impact on stifling warming temperatures, the letter emphasized the positive health repercussions of the Clean Power Plan: an estimated reduction in 3,600 premature deaths, 90,000 child asthma attacks, 300,000 missed work and school days, and as much as $54 billion in total public health and climate benefits.

The letter also stressed that a national emissions reduction standard from the power sector "goes a long way towards promoting human equality and environmental justice," noting that African-American children are 4 times more likely to be hospitalized for asthma and 7 times more likely to die because of asthma than white children, according to the Children's Defense Fund. The letter cited a report from the National Resources Defense Council that found roughly 4-in-10 Latinos and two-thirds of African-Americans live within 30 miles of a coal-fired power plant.

The letter was the latest effort of Catholic Climate Covenant to engage the Trump administration, following a petition asking he continue federal action on climate change. It was addressed not only to the president, but also Democratic and Republican leaders in Congress, all 50 U.S. governors and the incoming EPA Administrator Pruitt.

On Feb. 21, Pruitt addressed the agency for the first time, outlining his vision for their work: "I believe that we as an agency, and we as a nation, can be both pro-energy and jobs, and pro-environment." He added that "Regulators exist to give certainty to those that they regulate," but did not mention climate change during the speech.

Before his confirmation Feb. 17, EPA employees contacted their senators asking them to vote against him, The New York Times reported. Nearly 800 former EPA employees signed a letter saying Pruitt is not qualified to lead EPA and has raised questions about his acceptance of science and commitment to serve the public over corporate interests. A Catholic Climate Covenant campaign had Catholics send nearly 2,000 messages to senators with reservations about Pruitt before his confirmation hearing.

The Franciscan Action Network said after Pruitt's confirmation, it "firmly opposes" him heading EPA, saying he "directly threatens the welfare of the planet, the American people and our brothers and sisters around the world who are directly impacted by our nation's climate policies."