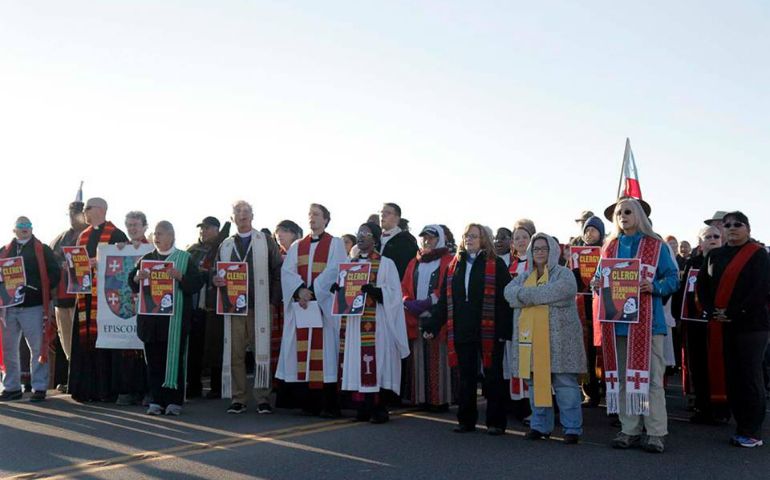 More than 500 interfaith witnesses marched on Hwy 1806 to Backwater Bridge where they formed a Niobrara Circle of Life. (Courtesy of Lynette Wilson/Episcopal News Service)

In silence they processed. In a circle they prayed. With Standing Rock they stood.

More than 500 clergy and people of faith across religious denominations joined the Standing Rock Sioux Nation and its supporters in their stand against the construction of the Dakota Access Pipeline.

The gathering Nov. 3, described as "a day of protective witness in solidarity with the Standing Rock Sioux Nation and with the water protectors," brought the interfaith group to the main Oceti Sakowin camp on tribal land in south-central North Dakota that has served as the base for the pipeline resistance.

Among them were Mercy Srs. Kathleen Erickson and Aine O'Connor, and Mike Poulin, a member of the Sisters of Mercy justice team in Omaha. The three spoke to NCR following the conclusion of the prayerful witness.

The role of the faith community at Standing Rock, O'Connor said, was "to decry the injustice that is happening to the Native American peoples here."

The demonstration against the Dakota Access Pipeline began in April, and has since brought more than 200 Native American tribes together, in what has been called the largest such gathering in modern times. Support has also come from other corners, including numerous environmental organizations, to the Oceti Sakowin camp near the mouth of the Cannonball and Missouri rivers.

The Standing Rock Sioux have filed a federal lawsuit alleging that the pipeline will cross land viewed as sacred, including burial sites, and is protected by existing treaties, and also pose a threat to the tribe's primary water source. The proposed path would take the pipeline underneath Lake Oahe and the Missouri River a half mile upstream of the tribe's reservation boundary. The tribe and supports have noted an earlier route had the pipeline passing near Bismarck, but was rejected early in the planning to protect municipal water supplies.

If completed, the 1,172-mile Dakota Access Pipeline would carry daily as much as 570,000 barrels of crude oil from western North Dakota to Illinois, where it would meet with an already operational pipeline. Energy Transfer Partners, the Dallas-based company constructing the pipeline, says it provides a safer, cheaper and more environmentally responsible way of transporting the oil than by rail or truck.

Beyond environmental and treaty concerns, the faith community was alarmed by treatment of the Water Protectors (the pipeline opponents' preferred term) by local law enforcement, which in recent weeks has used pepper spray and rubber bullets in confrontations and has made more than 100 arrests.

"Our duty as people of faith and clergy could not be clearer: to stand on the side of the oppressed and to pray for God's mercy in these challenging times," said the Rev. John Floberg, an Episcopal priest who organized the gathering and has served the Standing Rock reservation for two decades.

The solidarity witness began shortly after dawn in the Oceti Sakowin camp, where the 524 clergy and laity from 20 faith backgrounds met with the elders of the Standing Rock Sioux tribe. There, they gathered around the camp's continuously burning sacred fire. Several spoke against the Doctrine of Discovery, the term for a series of 15th-century papal bulls that gave Christian explorers authority to claim lands they encountered. A copy of the doctrine was given to the elders, who then proceeded to burn it.

After a traditional Native American smudging ceremony, in which smoke from burning various plants was fanned toward them to purify the body and drive out negative energy, the faith contingent processed in silence onto Highway 1806. They set up their prayer service near the Backwater Bridge — where local law enforcement erected a barrier following a clash between the two sides on Oct. 27 that resulted in 141 arrests after police attempted to break up a camp on private property in the pipeline's path.

The spot placed the faith community — Episcopalians, Lutherans, Baptists, and Unitarians, but only a few Catholics, including peace activist Fr. John Dear — near the pipeline's construction but also in the midst of sites the Standing Rock Sioux consider sacred, O'Connor said.

"We were not only standing with the people in that place, but we were standing on holy ground, where the burials, the tradition have been very important to the people," she said.

The service continued for nearly five hours, and included numerous speakers and songs, along with the formation of a Niobrara Circle, where participants offer peace to the person to their left and continue to do so until everyone exchanges peace with all.

Erickson, who grew up in North Dakota, said she felt compelled to participate because of her concern for the environmental threats the pipeline presents, but also with the racism toward Native Americans.

"It reminds us of taking of land or spoiling of land in places like Honduras and other countries, where indigenous people just do not have a voice that we of privilege have always had and taken for granted," she told NCR.

The situation has reminded the Sisters of Mercy of challenges indigenous peoples have faced elsewhere, such as in Peru with mining industries and in Australia with companies engaged in fracking, O'Connor added.

"We hear the cries of the peoples on Earth, but it's not just a cry from being oppressed, but an incredible cry of strength," she said, adding that these instances raise questions of justice as to why corporate interests appear to receive precedence over the needs of the people.

Pope Francis has regularly decried efforts to restrict or remove indigenous communities from lands they hold sacred and central to their culture. In his encyclical "Laudato Sí, on Care for Our Common Home," he stated:

They are not merely one minority among others, but should be the principal dialogue partners, especially when large projects affecting their land are proposed. For them, land is not a commodity but rather a gift from God and from their ancestors who rest there, a sacred space with which they need to interact if they are to maintain their identity and values. When they remain on their land, they themselves care for it best.

One of the goals of the prayer witnesses was to raise awareness, not only of their actions that day, but to bring the conversation back to their respective communities.

For much of the morning, the faith group was circled by a helicopter and a couple of planes, Poulin said. Along with two dozen or so police officers camped on the other side of the bridge, he said he saw police cars parked on most hills in the distance. The scene reminded Erickson of the militarized natured of the U.S.-Mexico border.

"It was kind of surprising to see just how many police were there," Poulin said. He added that organizers had contacted local law enforcement ahead of time to stress their intention was a "peaceful, prayerful, lawful demonstration" and they did not plan to attempt to cross the contested bridge.

The location of the prayer service was symbolic, O'Connor said, in that it served as a public witness "to reinforce what the water protectors have continually maintained, that they have been there as water protectors, not protestors. It was being done nonviolently."

The arrival of religious men and women came a day after a confrontation near the Cannonball River. Videos and photos on social media showed the use of pepper spray and tear gas on protestors standing in the river during a prayer ceremony; there were also reports of police firing rubber bullets at them.

A letter signed by many of the clergy and laity that came to Standing Rock urged President Barack Obama to investigate the Morton County Sheriff's Department regarding allegations of inhibited free speech, wrongful arrest, excessive use of violence and harassment of the Native Americans.

The letter also requested the Army Corps of Engineers to deny the construction permit for the pipeline, citing the danger it poses to drinking water, as well as the climate, and that it violates the 1851 Fort Laramie Treaty.

Acknowledging the issues raised by the Standing Rock Sioux tribe, the U.S. government on Sept. 9 suspended construction of the pipeline on federal lands near or under Lake Oahe. The order came shortly after a federal D.C. district court declined the Standing Rock Sioux tribe's request for an injunction to halt the project while their lawsuit proceeds.

Obama on Tuesday said during an interview with Now This news that the Army Corps is exploring alternative routes for the pipeline.

"We're monitoring this closely. I think as a general rule, my view is that there is a way for us to accommodate sacred lands of Native Americans," the president said.

His response drew uproar from those supporting Standing Rock on social media, urging the president not only to intervene to prevent further violent encounters, but also to stop the pipeline altogether.

The religious demonstration is the latest show of support for Standing Rock. Earlier in the week millions of people "checked in" on Facebook to the camp as a way to show unity with the cause but also after reports came that local law enforcement were monitoring Facebook to track activists. The Morton County Sheriff's Department called the report "absolutely false."

The New York Times editorial board joined on Thursday with those calling for the pipeline's rerouting, and also raised questions about its overall worth.

In addition, GreenFaith has organized an interfaith letter addressed to U.S. Attorney General Loretta Lynch, North Dakota Gov. Jack Dalrymple and Energy Transfer CEO Kelcy Warren stating their opposition, "in the strongest terms possible," to the pipeline on both spiritual and environmental grounds, as well as the treatment of the Sioux community and other demonstrators. It calls for the protection of sacred lands and also the pipeline project to be abandoned.

A coalition of activist groups have planned national day of solidarity actions for Nov. 15, many to be held at Army Corps offices, in an effort to demand either Obama or the incoming president to reject the Dakota Access Pipeline.

"We'll continue to fight until native sovereignty is honored, indigenous rights are protected, and our communities, water, and climate matter more than fossil fuel profits," organizers said a statement.