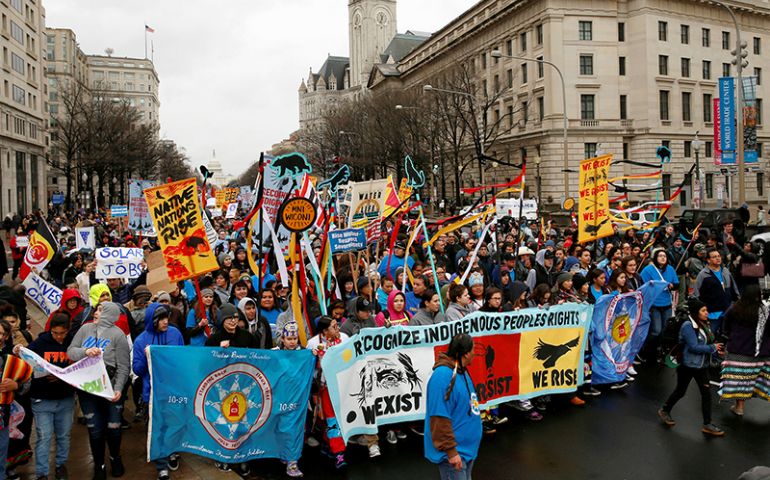 Indigenous leaders participate in a protest march and rally in opposition to the Dakota Access and Keystone XL pipelines in Washington, D.C., on March 10, 2017. (Reuters/Kevin Lamarque)

Washington — On a cold rainy morning, members of the American Indian tribes shouted "Water is sacred" and "Keep it in the soil; can’t drink oil" as they marched toward the White House.

The March 10 protest against the Dakota Access pipeline included hundreds of Native Americans, some dressed in traditional feather headbands and ponchos.

They beat drums and danced as they made their way through the streets.

The march came after a federal judge on Tuesday denied a request by the Standing Rock Sioux and Cheyenne River tribes to halt construction of the pipeline.

American Indian tribes have long argued that the $3.8 billion underground pipeline — which would run nearly 1,200 miles from oil fields in North Dakota to an existing pipeline in Illinois — endangers cultural sites and drinking water that comes from the Missouri River. The pipeline's path would come within a half-mile of the Sioux reservation.

The government had intended to further study the environmental effects of the Dakota Access pipeline, but President Trump directed an expedited approval process after assuming office.

The protest, which began at the Army Corps of Engineers office, included a stop in front of Trump International Hotel in downtown D.C.

"This is a personal fight for me," Douglas said, noting that his family has Native American roots. "I also believe water is a gift from God. Whenever we endanger it, we sin."

Muslims, too, stood alongside the American Indian tribes.

Yasmin Rizvi, 52, a retired schoolteacher, and her daughter Hena Rizvi, 25, a sales representative, traveled from Pennsylvania. As Shiite Muslims, they said, they could identify with the threat Native Americans face because history tells them other Muslims have confronted similar obstacles.

"Water is the basic need of life," Yasmin said.

The Rev. Jakob Thibault of Providence, R.I., said he believes "there’s kind of a blindness to indigenous issues" in much of the country.

But he said Christianity teaches him "that we don’t accept the status quo."