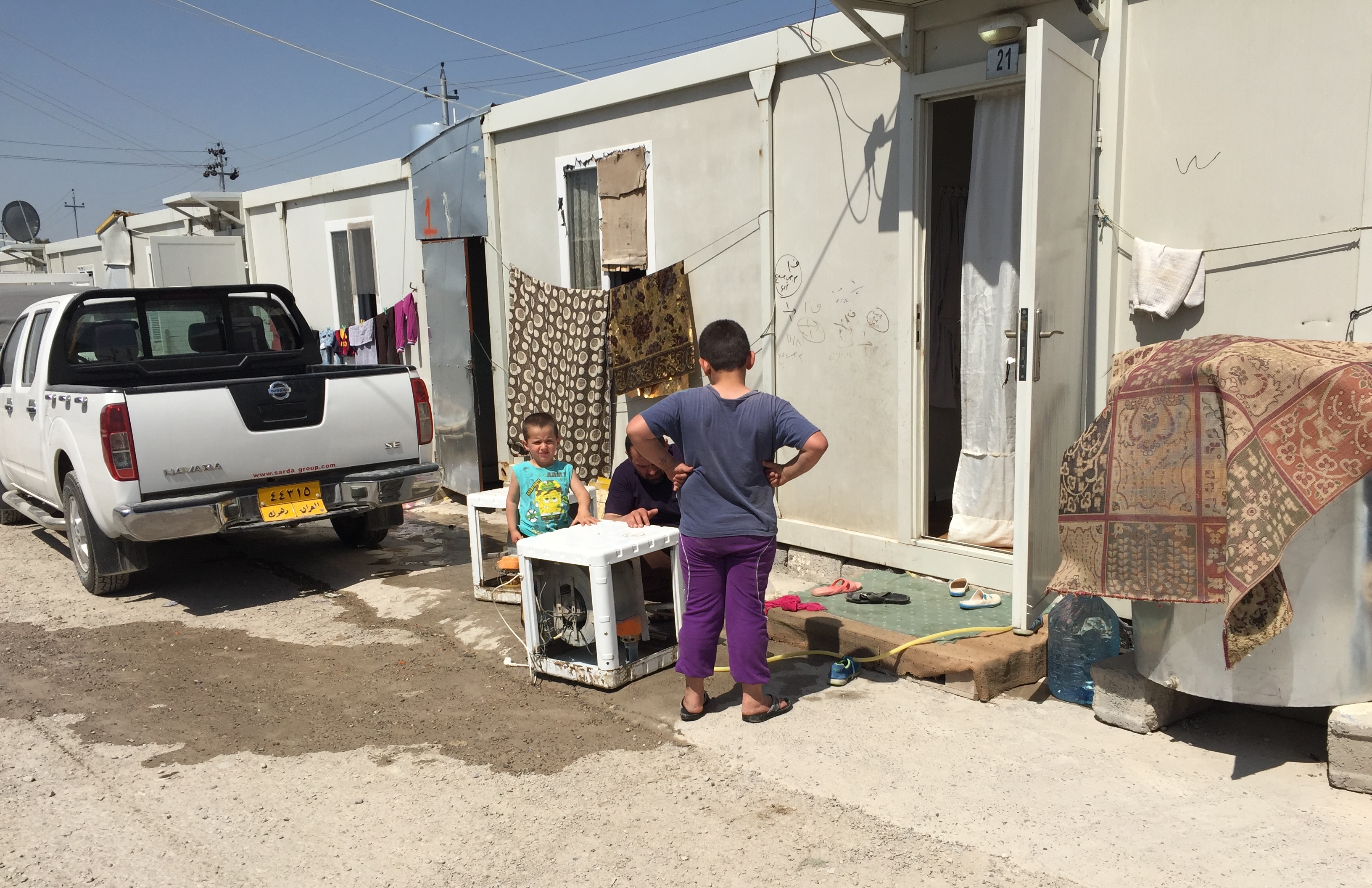 Editor’s Note: This week, New York Cardinal Timothy Dolan, chair of the Catholic Near East Welfare Association, is traveling to Iraqi Kurdistan on a pastoral visit to that region's displaced Christian families. NCR was invited to be a part of this small delegation.

The attacks by Islamic State militants on the city of Mosul, Iraq, beginning in June 2014, triggered a massive exodus from that city, and later from towns like Qaraqosh, the largest Christian city in Iraq, and nearby villages like Bashiqa. Some 500,000 people raced for safety and shelter in the Kurdish region of Iraq. More than 250,000 internally displaced people, some of whom are Christian minorities, arrived in Erbil, Iraqi Kurdistan.

The Kurdistan Regional Government welcomed the displaced people, but housing and health care became urgent needs. The displaced spent months living in the open air in tents in makeshift villages. Later, they found housing in unfinished buildings that had been abandoned.

The Chaldean Catholic church in Ankawa, a northern suburb of Erbil led by Archbishop Bashar Warda, who has good relations with both the Kurdistan Regional Government and the central government in Baghdad, began to secure improved living arrangements for the displaced. More permanent shelters and camps were eventually created, using modest shipping containers not more than 7 feet wide, in which one or more families reside.

Our small delegation visited two camps, Ashty 1 and Ashty 2, located in Ankawa, as well as a nearby health care clinic initially established by the Catholic Near East Welfare Association (CNEWA).

A grade school serves 750 students. The camp has a workshop where women create small handcrafted mosaics and it has a small factory where sesame seeds are ground to make pastes and dips. A basketball court and soccer field provide space for recreation.

The camp’s church, located under a large tent a year ago, is now located at a newly constructed building that seats 800.

The camp’s director described the daily challenges people face. The main problem is potable water. Gas generators and chlorination are used to create clean water. For every 10 families, a septic tank is installed. The Kurdish government removes trash.

The homes are converted shipping containers, sitting on cinderblocks. They are cramped, airless spaces with two windows and a front door. One window contains a boxy air conditioner. The camp’s streets are made of hard-packed mud and stone and dust is constant. Families hang their washed clothing to dry on lines tied to their buildings.

Another challenge for the camp is new marriages. Since there is no more living space available, young couples are forced to live with their parents after marriage, which leads to inevitable conflict.

Some families add space by attaching a thin frame with fencing or tarps to the containers. After two years, the camp’s temporary housing is taking on the feel of permanent housing. There is no place to go, no home to return to, as the Islamic State group either continues to occupy their towns or has booby-trapped the towns with explosives, or the region otherwise remains too dangerous to return.

“If we did not believe in Jesus, half of us would commit suicide,” said the camp director when asked to describe the mental health of those in camp.

As we meandered through the streets of Ashty 1, Msgr. John Kozar, president of the New York City-based CNEWA, greeted people warmly and reassured them that they are not forgotten, that they are loved and that, as Christians, they are our brothers and sisters.

In September 2014, CNEWA created a “dispensary” that has turned into a substantial health care clinic constructed out of prefabricated containers. Inside the clinic is a central window where patients sign in and have a form filled out describing their illness.

In different offices inside the containers, patients, especially babies and the elderly, are evaluated by medical staff. Blood tests are taken, vaccinations given and minor operations performed. Today, multiple aid agencies support the clinic.

An internist in another office said that he sees many patients with asthma, bronchitis and the flu, while some suffer from diarrhea. He sees 40-50 patients a day. Nearby residents not living in the camps often visit the health clinic.

CNEWA helped build a second clinic in nearby Kasnazan, along with a mobile clinic to serve people in more remote locations around Erbil.

Waiting to get an X-ray was a 70-year-old man named Dominic. A former chemistry teacher, he spoke decent English he learned more than 40 years ago in college. He explained that he thinks he’s suffering from kidney stones. He, his wife and 11 kids fled Qaraqosh when the Islamic State attacked. Four of his sons are now married.

“Daesh is not human being,” he said, using the Arabic acronym for the name of the Islamic State group. “Their minds are affected. All they want is to kill, kill, kill, war, war, war.”

While Dominic hopes to go home one day, he recognizes that there are many, many problems that are preventing him and his family from going home.

When asked how will lasting peace come about, Dominic said, “From the schools, churches, family and especially parents [teaching peace to the children],” he said.

[Tom Gallagher is a regular contributor to NCR and lead writer for the newspaper's Mission Management column.]