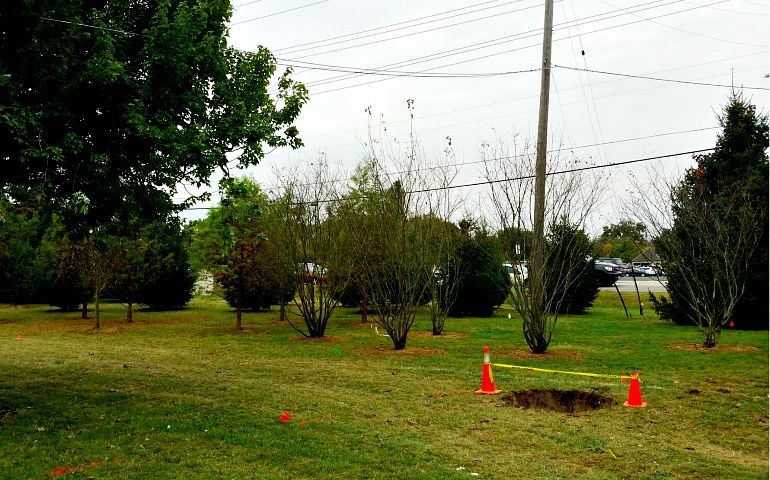 A new "green wall" is seen in the area between Shelbyville Road and St. Margaret Mary School in Louisville, Ky.. (Courtesy of Dr. Aruni Bhatnagar)

A Catholic school in Louisville, Ky., is the site of an important research project looking at ways to reduce airborne pollutants and creating a healthier and safer environment for citizens.

St. Margaret Mary School is collaborating with the University of Louisville, the Institute for Healthy Air Water and Soil, and the city's Office of Sustainability in the Louisville Green for Good project.

Dr. Aruni Bhatnagar, a professor of medicine and director of the Diabetes and Obesity Center at the University of Louisville, is the lead researcher on this project. Bhatnagar said the idea at first was to research the impact of environmental pollutants on heart health and how different factors increase a person's chances for heart disease.

"Air pollution is a problem all over the world," he said.

The research discovered that a large percentage of people, approximately 80 percent, who die of or suffer from heart disease are exposed to large amounts of environmental pollutants, such as vehicle and industrial emissions.

"This was very surprising to us," Bhatnagar said. "So a few years ago, we decided to look into this issue on a local and personal level."

The Green for Good project began in May at St. Margaret Mary, which faces Shelbyville Road across from a large shopping mall, an area exposed to a lot of vehicle traffic. Bhatnagar said the main goal of the project is to decrease the amount of air pollutants around the school caused by the traffic. Blood and urine samples were collected from student and staff volunteers in the beginning stages of the project to analyze the levels of pollutants in their systems and which pollutants were most prevalent. The area surrounding the school was also tested for pollutants.

"We measured air pollution levels and put together a detailed map of pollutants around the school. There's a lot there," Bhatnagar said.

Once preliminary data had been collected, several large trees and shrubs were planted along the front of the school. Bhatnagar said the idea was to create a "green wall" between the school and the road, to determine whether creating so called "greening areas" would reduce the amount of air pollutants in that area.

A second round of sample collection from students and staff at St. Margaret Mary will begin in mid-November, Bhatnagar said, so the data from preliminary testing may be compared to determine if the "green wall" had an impact in reducing airborne pollutants.

Through the Green for Good project was started in May by the university, early framework for the project was laid out by the city government in 2012. That year, the city launched a research project called AIR Louisville, which looked at inhaler usage across the metro area.

Grace Simrall, chief of civic innovation in Louisville, said the goal of the project was to identify hotspots around the city and see if inhalers were more prevalent in areas with greater activity and population. The Shelbyville Road area was one of the hotspots. Simrall said when the city became aware of the university's plans for the Green for Good project at the school, it decided to contribute the data it had collected through AIR Louisville to aid Bhatnagar's efforts.

"We saw it as a good opportunity," Simrall said. "Our hope was to supply additional information and look at how we could improve the lives of the students and staff at the school."

If the project is successful, Bhatnagar said, the university will look to expand the project to other areas around Louisville, though this would take place over the next five to six years.

"This is a pilot project to see if it works," he said. "We've identified a few neighborhoods around the city to try as greening areas, but this is a long-term project."

"We've been in close conversation with Dr. Bhatnagar and the university in finding places," she said. "Our work continues to evolve. This is only the beginning."

The main thing that has impressed project leaders has been the willingness of students and staff at St. Margaret Mary to participate.

"We weren't sure what kind of support we would get," Simrall said. "I've been so pleased with the cooperation in this study. It really speaks to the heart of the St. Margaret Mary School."

Bhatnager said he also was pleased with how eager and interested students and staff were to participate in the project.

"Everyone has been so amazing and cooperative and forthcoming," he said.

Those involved at St. Margaret Mary are looking forward to seeing what can be learned from the results, said Principal Wendy Sims.

"The Green for Good project has been a great learning experience for us all," Sims said. "We are answering Pope Francis' call to be good stewards of the Earth today and in the future. I hope the students will truly understand their physical and emotional health is connected to caring for the environment."

[Tyler Brown is a freelance reporter from Harrodsburg, Ky.]