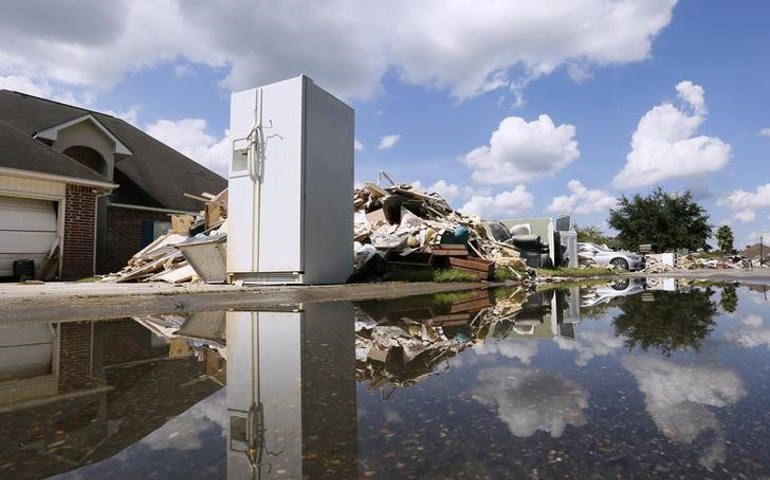 Washington — August's torrential rains that caused catastrophic flooding in southern Louisiana have convinced Robert Gorman that it's time to think about being ready the next time the floods hit.

Gorman, executive director of Catholic Charities of the Houma-Thibodaux, La., diocese has been discussing with his wife pre-emptive steps to take before the water rises. While their home wasn't damaged in August, the Gormans are getting prepared should an unpredictable downpour affect their neighborhood.

Catholic Charities is among numerous agencies still responding to the immediate needs of families displaced by the storm, which dropped up to 31 inches of rain in some locales.

Louisiana is increasingly becoming prone to flooding, meteorologists and climate scientists have said. Its location on the Gulf Coast exposes it to strong hurricanes such as Hurricane Katrina, which devastated New Orleans and surrounding areas in 2005. A conference hosted by the Houma-Thibodaux diocese in 2009 heard from a scientist member of the Intergovernmental Panel on Climate Change who, Gorman recalled, described how climate change would subject the state to more intense periods of monsoon-like rains followed by times of drought.

Southern areas of the state are more vulnerable to high water because of subsidence, the gradual sinking of the land; erosion along the Gulf Coast, some of it brought on by development, and rising sea levels caused by the earth's warming climate.

Up to 97 percent of climate scientists have attributed climate change to human activity at least in part.

The Catholic Charities executive in a Sept. 19 interview with Catholic News Service called upon the presidential candidates and elected officials to take seriously the threat of flooding and disappearing land not just in Louisiana, but also in other coastal communities.

Louisiana is one of the nation's poorest states. The Census Bureau reported Sept. 13 that 19.6 percent of Louisianans lived in poverty in 2015. Gorman said poor residents will be affected most by natural disasters because they are more likely to live in communities most vulnerable to flooding. Gorman said he is hearing from more families, many settled in communities since the 18th century, about relocating because of invading waters.

"It's something we can't ignore," he said. "The sea level rise is obvious to everybody. I don't think we've even started to do a good job connecting sea-level rise to climate change."

Gorman expressed concern with missing dialogue on climate change in the presidential campaign. "I don't hear it being discussed at all," he said.

Catholic observers told CNS that they are troubled by the almost invisible profile of climate change while the divisive campaign instead focuses on personality, integrity and personal competency despite voter support for addressing environmental concerns.

"Politically, we're saying we want leadership who want to enhance our role as faithful people to be good stewards of the environment," said Franciscan Sr. Ilia Delio, the Josephine C. Connelly chair in Christian theology at Villanova University.

Climate change received scant attention during Monday night’s debate, limited to Hillary Clinton proposing investments in clean energy and calling out her Republican opponent Donald Trump for his description of climate change as a hoax cooked up by China.

Delio called the concern for the environment as much as a right to life issue as abortion.

"We are for life and when we are destroying life in any way, we are working against the very thing we believe in and that is the incarnation," Delio said.

More so, she added, Pope Francis in his 2015 encyclical, "Laudato Si', on Care for Our Common Home," encourages people of faith to lead the way in addressing environmental concerns and building community across cultures where politicians do not.

Mercy Sr. Karen Donahue, justice coordinator of her order's West Midwest Community in Detroit, told CNS that people of faith are responsible for acting on behalf of the environment and acting on the pope's call. She described care for creation as a pro-life concern and urged clergy to bring the church's teaching on the environment to the pulpit as much as they do abortion and euthanasia.

"I think the danger is people say these are political issues," Donahue explained. "Yes, they may be political, but they're profound to our faith."

Stark differences mark the stances on the environment and climate change of the Democrat Clinton and Republican Trump as do their parties' respective platforms.

Calling human-caused climate change a "hoax," Trump has said his administration would review federal regulations -- including those related to the environment -- and work to eliminate those that hinder business activity. He has said he would withdraw the United States from the climate accord reached last December in Paris.

Trump also has said he would open the Arctic and federal lands to oil drilling and hydraulic fracturing to promote U.S. energy independence. He has expressed skepticism about the future of alternatives to fossil fuels such as solar and wind energy. The GOP nominee told a crowd of oil and gas executives meeting in Pittsburgh Thursday he would roll back environmental regulations and drilling restrictions, as well as wipe out the Clean Power Plan.

Clinton on the other hand has pledged to continue on the path set by President Barack Obama in recent years. She has said she supports the Clean Power Plan that sets limits on power plant emissions, opposes construction of the Keystone XL pipeline from Canada to transport tar sands oil to Gulf Coast refineries, backs expansion of renewable energy alternatives and wants to pursue greater action to address climate change.

The Democrat has said she would not dismantle environmental regulations under the Clean Air and Clean Water acts because to do so would endanger health and wildlife.

Such differences can give rise to divisiveness among their supporters. The Catholic Climate Covenant is working to keep the debate respectful throughout the remaining weeks of the campaign and into future.

The covenant has introduced its Dial down the Heat initiative. Dan Misleh, executive director, said it is meant to not just ask people to consider using less energy in their lives to limit the rise in overall global temperatures, but also to create spaces for civil dialogue.

"As people of faith, we ought to be the ones creating that safe place to come and disagree and still understand there are ways forward with who we are as Catholics," Misleh told CNS.

The answer may lie in grass-roots communities who are facing the prospect of being uprooted after generations of living in one area, said Gorman, the Louisiana Catholic Charities official.

"It's going to have to come from the ground up," he said. "It's going to come from local folks like people here in our diocese who are saying, 'Why do we have to move? Why isn't something being done?' The answer they hear is because of subsidence, erosion and climate change. Part is natural cycles. But people say 'Yeah, but our ancestors have been here for hundreds of years (and didn't see this).'

"It will lead people to push. When you force someone to leave their home, where their parents, grandparents, great-grandparents lived successfully for hundreds of years, the answer 'It just happened' isn't going to be good enough."