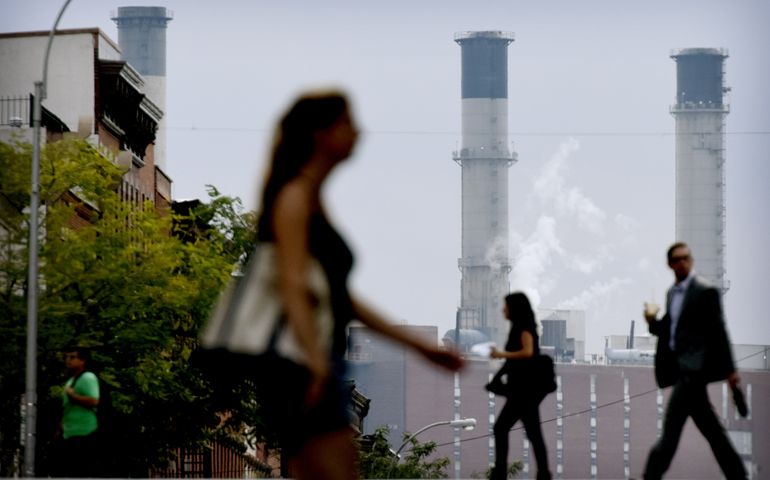 The East River Generating Station in New York City is seen in this 2015 file photo. (CNS/Justin Lane, EPA)
This article appears in the Transition to Trump feature series. View the full series.

The possibility of a climate skeptic heading the U.S. Environmental Protection Agency has mobilized students at Georgetown University and elsewhere to press their elected representatives to prevent such an appointment.

That day, members of the group, which originated at Georgetown, are urging people to contact Congress, primarily senators, to request they oppose Ebell's potential appointment, and should it come, not to confirm him or other climate change deniers, by filibuster if necessary, into the Trump administration. A Facebook image filter created by the group attaches that message to a user's profile picture.

Erin Hickock, a senior international politics major in Georgetown's School of Foreign Service, told NCR that Ebell represents "a reversal" on U.S. climate change policy that in recent years has moved away from debates about the reality of global warming and toward real steps to take action. Those efforts, she said, culminated last December in America's leadership in achieving the Paris Agreement on international climate action.

"I could really sense a shift, so that's why it was so concerning when we heard about Myron Ebell because it seems to be a reversal, and just kind of a pivot back to where we were, where we were gridlocked about debating whether climate change exists. And now we may neglect the actions that we were just beginning to achieve," she said.

In September Trump selected Ebell to lead his EPA transition team. Ebell is the director of energy and environment for the Competitive Enterprise Institute (CEI), and also chair of its subgroup Cooler Heads Coalition, which according to its website, is "focused on dispelling the myths of global warming by exposing flawed economic, scientific, and risk analysis." Both organizations were active in the 2009-10* fight against cap-and-trade legislation; Competitive Enterprise Institute has received millions in donations from oil giant ExxonMobil.

Ebell has relished his status as a climate skeptic, making reference to that moniker, as well as "climate criminal," in a biography he submitted ahead of congressional testimony.

Ebell does not have a background in science; he studied philosophy at the University of California-San Diego and political theory at the London School of Economics. He is a vocal opponent of the Paris Agreement and EPA's Clean Power Plan, the carbon pollution rules for coal-and gas-fired power plants that forms the backbone of U.S. pledges under the Paris accord.

The Paris Agreement was reached among 195 nations, 114 of which have ratified the now in-effect pact to hold average global temperature rise below 1.5 to 2 degrees Celsius (3.6 degrees Fahrenheit). A consensus among 97 percent of climate scientists agree that climate change is occurring and likely the result of human activity.

A frequent sparring partner to environmentalists and climate scientists, Ebell also took on Pope Francis and his encyclical on the environment and human ecology, "Laudato Si', on Care for Our Common Home."

Ebell said of the document at the time of its June 2015 publication:

It is, in general, scientifically ill-informed, economically illiterate, intellectually incoherent, and morally obtuse. It is also theologically suspect, and large parts of it are leftist drivel, albeit couched in the vocabulary of Catholic social teaching.

"This is a guy with no science training who questions the world's best scientists. … He challenges the moral standing of Pope Francis and the theological insights of Pope Francis. So this is the guy that we're protesting," said Andrew Bennett, an international relations professor at Georgetown who proposed the campaign to his students after a post-election discussion about possible responses to the election outcome.

"I'm not a professional protestor, to use Trump's term. I haven't gone to a demonstration in over 35 years. But I decided that I had to do something," Bennett told NCR.

Their first Ebell opposition action took place Nov. 18 with a protest march beginning at Georgetown's Red Square to the Competitive Enterprise Institute offices in downtown Washington, D.C. About 350 students, from Georgetown and nearby colleges, and other supporters joined the protest. A similar protest among college students took place in Boston.

"It was just a really high-energy march all the way. But again, really peaceful and the messaging was very deliberate … centered around responsible choices for the next four years concerning the EPA," Hickock said.

Outside the offices, caution tape was set up to prevent anyone from entering the building. A handful of students spoke in between chants about their movement and why they viewed Ebell unfit to head the nation's highest environmental post.

The group has pointed to the authority a president has to enact environmental policies absent congressional approval, and the role his advisors — not only at EPA, but at the Departments of Interior and Energy — play in guiding those decisions. For example, President Barack Obama used executive powers to join the U.S. to the Paris Agreement, implement vehicle fuel efficiency standards, direct federal agencies to consider climate impacts, and limit oil and gas drilling on federal lands and offshore.

Another concern of the students is that while policies on other issues could conceivably be reversed, the same is unlikely for damage to the environment if pro-fossil fuel policies are enacted — it takes about a century for the bulk of carbon dioxide emissions from burning fossil fuels to leave the atmosphere, with a portion remaining much longer.

Hickock sees sustainability — a growing focus on the Georgetown campus in recent years — important not only to the future of energy provision in the U.S. but also for national security and general well-being. A 2014 survey found 41 percent of 1,600 U.S. international relations scholars viewing global climate change as the most-pressing foreign policy facing the country; likewise, a pre-election poll of 21 risk experts by the Associated Press found climate change as the world's top threat.

The prospect of rising sea levels could in particular catch Trump's attention, Bennett mused, due to the numerous seaside golf courses and properties he owns, such as his Mar a Lago resort in southern Florida. One of his Irish golf courses cited rising sea levels in seeking a sea wall building permit. The topic came up during his meeting with The New York Times, with the president-elect joking that rising seas could in turn put more inland properties in better shape.

Students for Climate Security see the situation as not just trying to stop a threat, but to seize an opportunity — for America to make itself more energy independent, through the increased use of renewables, and by becoming a manufacturing leader in that area. To do that will require the right people advising Trump, Bennett said, who are professional and qualified and without ties to the fossil fuel industry, as is the case with several of the names floating for top environmental posts.

"When people realize how this Trump transition team on the environment is just way far out of the mainstream and also fraught with conflicts of interest, I think there's really going to be a backlash against that," he said.

Editor's Note: This story has been updated to clarify the timeframe when Congress debated cap-and-trade legislation. The American Clean Energy and Security Act of 2009 was a bill that sought to establish an economy-wide greenhouse gas cap-and-trade program. That bill passed in the House of Representatives on June 26, 2009, but a Senate energy bill presented in July 2010 left out cap-and-trade.