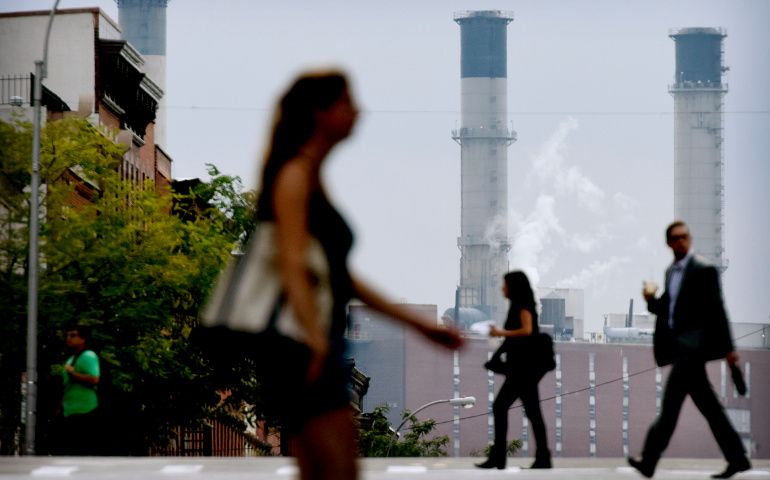 There is one life issue that has not received the attention it deserves this election cycle: climate change. Among the consistent ethic of life issues at stake in this election, perhaps none is greater in scope and gravity.

For Pope Francis, climate change "represents one of the principal challenges facing humanity in our day." As he writes in "Laudato Si', on Care for Our Common Home," climate "is a common good, belonging to all and meant for all." At the global level, Francis affirms how climate is "a complex system linked to many of the essential conditions for human life."

Yet we continue to live by an outmoded model of economic development that accelerates grave risks to the essential conditions for life on the planet. Although fossil fuels powered the Industrial Revolution, burning coal, oil and gas contributes to historic atmospheric levels of trapping greenhouse gases that change the Earth's climate.

In a Sept. 20 open letter, 375 members of the National Academy of Sciences, including 30 Nobel Laureates, write about two interconnected tipping points: environmental and political. The scientists write that our "fingerprints are visible" in the retreat of Arctic sea ice, ocean acidification, sea level rise, and altered rain patterns.

Francis underscores these concerns, noting how these changes create a host of threats to ecosystems and human life. For example, sea level rise poses extreme risks to a quarter of the world's population that lives on coasts, including the majority of the world's megacities. Climate change has also contributed to significant changes in agricultural growing seasons and animal migrations that in turn drive human migration and refugee crises, and exacerbate conflicts over resources and land.

Absolute certainty about the human impacts on climate change is unattainable, the scientists write, yet "we are certain beyond a reasonable doubt, however, that the problem of human-caused climate change is real, serious, and immediate, and that this problem poses significant risks to our ability to thrive and build a better future, to national security, to human health and food production, and to the interconnected web of living systems."

Francis laments how, if present trends are not abated, "unprecedented destruction of whole ecosystems" entails "serious consequences for all of us."

The scientists of the National Academy of Sciences explain that studies of temperature and sea level change over the last million years demonstrate environmental "tipping points." They are uncertain how proximate we are to environmental tipping points now. However, they continue, we do know that rapid warming of the planet will likely trigger tipping points for which there is no return. These changes will not last one or two election cycles; rather, they will set in motion large-scale changes in ocean circulation, loss of major ice sheets, and species extinctions that will last thousands of years.

The scientists then turn to tipping points in the electoral cycle. Contrary to the opinion of the Republican presidential nominee, Donald Trump, who has wrongly asserted that climate change is a hoax, the scientists explain that the basic science of how greenhouse gases trap heat has been clear for over a century.

Trump has promised withdrawal from the Paris Agreement. Such a withdrawal would send a clear message to the world: We do not care about climate change. The United States would lose its standing as a responsible leader and partner to address the issue. The consequences of such a withdrawal would be "severe and long-lasting."

The United States plays a key leadership role in the kind of policies we enact at home and advocate internationally. President Barack Obama led the way in achieving the Paris Agreement and has taken significant steps to reduce the domestic use of fossil fuels.

It strains credulity to suggest that Trump promotes a culture of life in any shape or form. This is a man who regularly demeans women, even brags about sexual assault — let's be entirely clear, what he calls "locker-room talk" adds insult to injury for every survivor of sexual assault. A man who demeans the disabled, Latinos, African-Americans and Asians mocks human dignity and a culture of life.

Confronted with the loss of support within his own party and diminishing chances of winning the election, Trump has abandoned any pretense of civility and openly subverts fundamental trust in the democratic election process. The way he has responded to pressure and criticism on the campaign indicates he is wholly unqualified and unprepared for the presidency.

In contrast, Democratic presidential nominee Hillary Clinton has devoted her entire life to public service. She demonstrates basic respect for all people, and has proven effective in advancing policies protecting the most vulnerable among us, including children, the elderly, and veterans. She is a respected and successful diplomat.

As president, she would build upon Obama's strong leadership on climate change. As the National Academy of Sciences members suggest, nations that lead the way toward decarbonizing energy systems will also be economic, political and moral leaders in the century ahead.

We need to follow Francis' call for a new revolution to an ecologically centered ethic that sustains the delicate ecosystems of our one and only common home. This is the fundamental life issue of this election and this century.

[Alex Mikulich is an anti-racist Catholic theologian who serves as assistant director of mission and ministry at Loyola University New Orleans.]