Politics, culture or theology? Why evangelicals back Trump on global warming 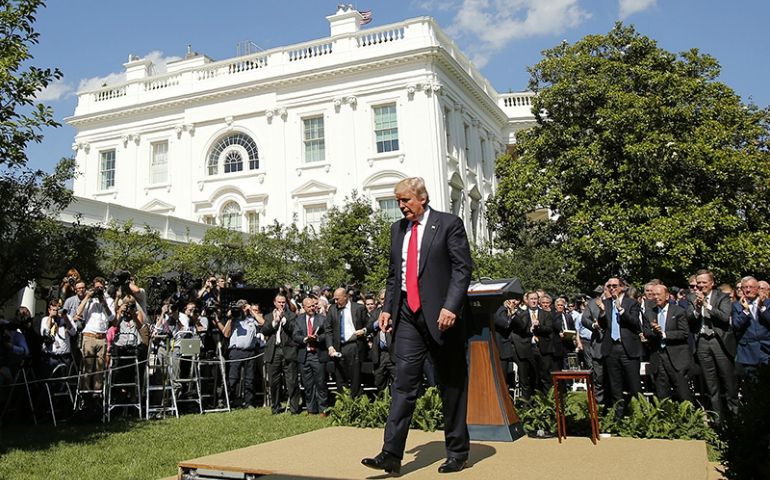 President Donald Trump departs after announcing his decision that the United States will withdraw from the landmark Paris Climate Agreement, in the Rose Garden of the White House in Washington, D.C., on June 1, 2017. (Courtesy of Reuters/Kevin Lamarque)

President Trump's decision to pull out of the landmark Paris agreement sparked a global outcry and provided yet another flashpoint to illuminate the nation's stark political divide on climate change: The U.S. right largely rallied to his side while those on the left gnashed their teeth over what seemed like a planet-threatening move.

But the controversial move earlier this month was also another indicator of the sharp contrast between conservative Christians and the rest of the American religious scene, as predominantly white evangelical Protestants often hailed the president's action while Catholics, mainline Protestants and leaders of other faiths decried it.

"Climate change is real. Failing to protect the earth is not just a failure of leadership. It is a moral failure," Chicago Cardinal Blase Cupich wrote in a tweetstorm of criticism that was echoed by Catholic officials from Washington to the Vatican, where Pope Francis has made environmental protection a priority.

On the other side, however, conservative Christians such as the popular commentator – and theology student – Erick Erickson were having none of it.

"I worship Jesus, not Mother Earth," Erickson tweeted. "He calls us all to be good stewards of the planet, but doesn't mean I have to care about global warming."

Speaking at a town hall meeting in Coldwater, Michigan, GOP Rep. Tim Walberg – a graduate of evangelical schools – made a similar point: "As a Christian, I believe that there is a creator in God who is much bigger than us. And I'm confident that, if there's a real problem, he can take care of it."

Yet the question of just why white evangelicals are such outliers on this issue remains a matter of intense debate.

The simplest, and most common, explanation is that conservative Christians are simply putting their political preferences first, like most people do; indeed, surveys show that white evangelicals remain stalwart Trump supporters and backers of GOP economic and other policies, and that pattern seems to hold on this issue as well.

"Reports @realDonaldTrump withdrawing from Paris Accord are good news," tweeted Ralph Reed, a veteran of the religious right and chairman of the Faith and Freedom Coalition. "Hurts US economy, kills jobs, goes easy on China & India. Bad deal."

But several other factors complicate the straightforward, politics-based answer.

For example, new research indicates that on environmental issues, at least, conservative Christian theology may be the driving force behind the sharply divergent views of evangelicals.

That's the upshot of a new study by Nebraska sociologist Philip Schwadel and Washington State University sociologist Erik Johnson, published in the April edition of the Journal for the Scientific Study of Religion. The study uses almost three decades of repeated cross-sectional data to show that the opinions of conservative evangelicals on environmental policies are informed by theology more than ideology.

"Even in the 21st century, when politics seem to be of utmost importance, differences in support for environmental spending among different religious groups have nothing to do with political perspectives," Schwadel said. "Theological views seem to be the biggest factor explaining differences between evangelicals and other Americans."

In an interview with RNS, Schwadel explained that on environmental concerns, party affiliation played as large a role in influencing the views of Americans overall as did their religious beliefs, and both those factors outstripped every other variable, such as education, sex, income, race and geography.

But when comparing evangelicals to some other religious groups, the evidence indicated that religious views were far more important for evangelicals than for other Christians.

The chief theological marker of their beliefs, he said, is that evangelicals tend to have a literal view of the Bible – they believe that in Genesis the "earth was given to them to do as humans will" and that the prophecy at the end of the New Testament that Jesus will return in glory to rapture his followers is soon to be fulfilled.

Basically, if you believe that God created the world in six actual days, and that it will end in the twinkling of an eye, then you might be more prone to short-term thinking about the environment.

At the same time, other scholars caution that there's more to the story.

Molly Worthen, an assistant professor of history at the University of North Carolina, Chapel Hill, and author of "Apostles of Reason: The Crisis of Authority in American Evangelicalism," agreed that it is important to push beyond "this tendency among many pundits and political scientists to simply read theology as a pious varnish on political opinions."

But Worthen argues that even scriptural literalists have a cultural context to their views of the Bible, and in the case of conservative evangelicals that context has been strongly affected by their deep and long-simmering suspicion of science and professional experts as promoting an anti-religion agenda.

That attitude gained steam in the 19th century with the rise of scientific approaches to biblical interpretation and the reaction against Darwin’s theory of evolution.

In the wake of the ridicule directed toward fundamentalists after the famous 1925 Scopes trial in Tennessee – in which a teacher was found guilty of teaching about evolution – conservative Christian resentment toward powerful elites and intellectuals grew even more intense.

Evangelicals, Worthen said, were trained "to see the Bible as a code book that, properly interpreted, could reveal the true meaning of current events no matter what the fancy scientists and political elites would tell you."

In contemporary terms, that has engendered a penchant for conspiracy theories and an appetite for "fake news," and it encourages many evangelicals to view experts – such as climate scientists, who hold a broad and deep consensus on global warming and humanity's role in it – as "either dupes or servants of the devil's cause," she said.

Conservative Christians have also developed a network of institutions to provide alternative theories that seem to rebut the "secular" experts using their own tools of science and reason against them. So what may once have been theology has become its own self-affirming culture dedicated to providing an alternate answer to whatever "facts" the world provides.

Whether the effects of climate change in the coming years will change evangelical minds isn't clear; surveys show the rest of the country is increasingly concerned, and 6 in 10 disagreed with Trump's decision to withdraw from the Paris agreement.

For now, however, conservative Christians like Erickson seem to be doubling down on their biblical worldview.

"The truth is we are all going to die. But it won't be because of global warming," Erickson wrote in an epic response that threw the Book of Revelation back in the face of liberals and scientists. "I have read the end of the book. There will be famine. There will be drought. There will be flood. And there will be war. Then there will be a last day where we stand before our Maker are are called to account.

"Worrying about global warming and social justice won’t get you past the pearly gates," Erickson continued. "Saving souls will. But it is hard to save souls when you don't believe in the God of creation because you are too busy worshipping that creation."

Politics | Politics, culture or theology? Why evangelicals back Trump on global warming