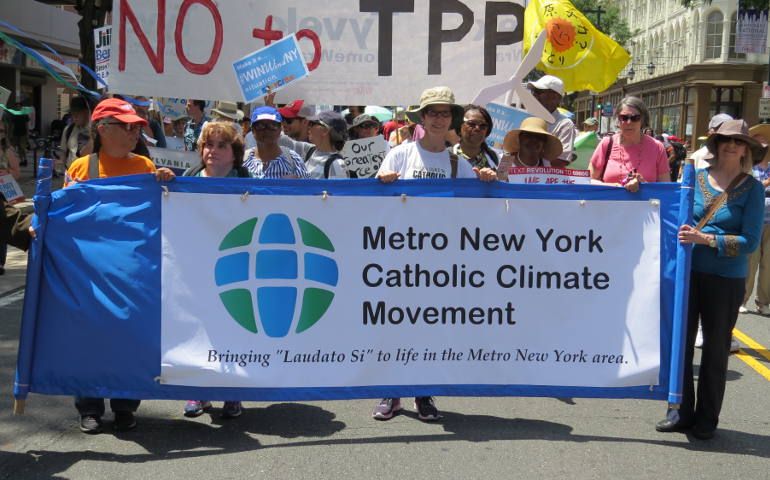 A group of Catholics from New York take part in the March for a Clean Energy Revolution held July 24 in Philadelphia ahead of the Democratic National Convention. (Photos courtesy of Nancy Lorence)

The March for a Clean Energy Revolution held Sunday in Philadelphia ahead of the Democratic National Convention touted far more than a nationwide swap in fuel sources. The demonstration also voiced a plea for an economy for life, more and better jobs, and health and well-being for people of all ages.

With Philadelphia temperatures in the high 90s, faith groups and farmworkers and more assembled for the march at City Hall, carrying hand-painted banners down Market Street and ending their demonstration a mile away at Independence Hall.

According to march organizers, more than 10,00 people joined in the march, convened by Americans Against Fracking and Pennsylvanians Against Fracking, and endorsed by more than 900 faith, environmental, health, labor, political, justice, indigenous and student organizations from all 50 states of the union.

Organizers said on the march website its purpose was to call “for action to prevent climate catastrophe” and present a list of five demands to current and future policymakers:

Prior to the march, people affected by fracking spoke at a press conference. A study published last week by the Johns Hopkins Bloomberg School of Public Health found that people with asthma who live near large or large numbers of active fracking wells are one and a half to four times more likely to have asthma attacks than those living farther away.

In addition, the last couple years have produced an avalanche of research findings on the impacts of fossil fuels and traffic emissions on public health. Many have concluded there is no safe level of fossil fuels, feeding doctors’ and scientists’ calls for a full phase-out in the coming decades.

Research the past few years has also found that particulate air pollution (from coal-fired power plants and traffic) also leads to cognitive decline.  While initial studies looked at seniors and sub-populations, such as women, recent studies have also found an association between traffic-related air pollution in schools and cognitive development in primary school children.

Last week, record high temperatures were recorded in the Middle East, as spots in Kuwait and Iraq soared to 129 degrees Fahrenheit, both standing as the two hottest temperatures ever recorded in the Eastern Hemisphere, according to Weather Underground. In addition, a rash of kidney disease among young sugarcane workers in Central America the last few years -- which researchers initially thought must be related to chemical exposure -- has recently been linked to workers overheating and subsequent stress on their kidneys. Air pollution contributes to kidney stress as well.

Nancy Lorence, a parishioner of St. Francis Xavier Church in Manhattan who participated in the march with other people of faith, told NCR, “It's clear that people of faith have made a big impact on the issues of climate change and environmental justice.”

“We are called to address climate change as a moral issue. Climate change is happening and we are fast reaching a tipping point -- so getting off of fossil fuels that are driving that change and transitioning to sustainable energy is a moral imperative. We're marching to push this onto the national agenda; we don't have time to wait,” she said.

Lorence cited the heavy water use of the fossil fuel industry along with pollution and threats to life and lives, especially those of the poor.

The contingent of New York Catholics who attended the march collected money from their parishes to make a banner, Lorence said, and one member of their group helped plan an interfaith service that took place before the march.

Said Lorence, ““Our commitment has to do with our brothers and sisters in the frontline communities - the poor and mostly communities of color who are already feeling the effects of climate change.  And it also has to do with our children and grandkids and the generations to come who will have to live with the consequences of the decisions and actions we make today.  This is a global problem that impacts us all….and all of God's creation.  Laudato Si is a call for all of us to do what we can locally to mitigate global warming.”

A number of Mercy sisters also participated in the march. Many more concerned Catholics, sisters and affiliates had made plans to attend the march, said Sr. Marie Lucey, advocacy director for Franciscan Action Network, but the heat prevented at least some from attending.

[Marie Venner is chair of the National Academies’ Transportation Research Board subcommittee on Climate Change, Energy, and Sustainability and former co-chair of the Risk and Resilience Planning and Analysis subcommittee. She is also on the Steering Committee of the Global Catholic Climate Movement.]