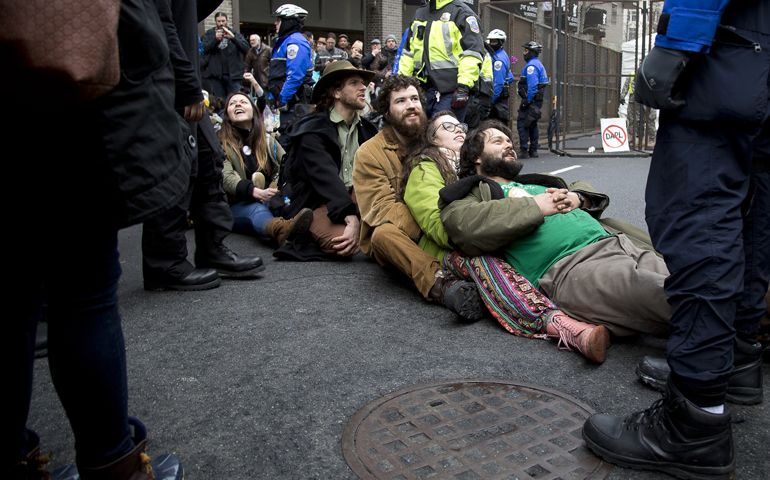 Environmental protesters engage police in Washington prior to the start of U.S. President Donald Trump's swearing-in as the country's 45th president at the U.S. Capitol Jan. 20. (CNS/Tyler Orsburn)

"Is there any hope at all?"

The rhetorical question captured the sentiment felt among many environmental groups and creation-conscious people of faith as fears of climate skeptic Donald Trump becoming president became reality with his inauguration last month.

The question was posed by Christina DeConcini, director of government affairs for the World Resources Institute, during a Catholic Climate Covenant webinar Jan. 26 that centered on the coming challenges, as well as opportunities, the Trump administration poses for environmental concerns. The threats, she said, are real, acknowledging these are "pretty dark days that we're in," as she pointed to actions already taken and Trump's propensity so far as president to at least attempt to make real his promises from the campaign trail.

"We know he's not going to be a friend to the environment," said Covenant director Dan Misleh.

Even so, DeConcini answered her own question in the affirmative, as she and others called on Catholics and the larger religious community to themselves double down on their own values as they relate to environmental issues, in particular for continuing international funding for developing countries most vulnerable to impacts of climate change, and to carry those values into the public square — to their elected representatives, to their local communities, and to their places of worship — and to mobilize their faith into action at all levels.

"There never has been more urgency for your collective voices to speak up on what is morally right and just on many issues, including climate change, clean air and clean water," DeConcini said.

The early days of Trump's presidency have offered much to rattle the nerves of environmental advocates.

Along with that, Trump signed executive orders reviving the Keystone XL transnational pipeline and Dakota Access Pipeline, which received final permit approval Feb. 7, and promising an expedited environmental review process. His full Cabinet, several with ties to the fossil fuel industry, all appear likely to be confirmed to their posts.

The Republican-led Congress so far has rolled back Obama-era regulations on methane emissions (a potent greenhouse gas), coal mining contamination of streams, and disclosure of payments from oil and gas companies to foreign governments. A freshman Florida congressman has proposed eliminating the U.S. Environmental Protection Agency. An effort to sell off federal lands the size of Connecticut was pulled back after backlash from a coalition of conservationists and outdoorsmen and women.

References to climate change have disappeared from Whitehouse.gov, and scientists and EPA officials have frantically backed up data fearing further deletions. Rangers took to their respective national parks' social media accounts to push back against efforts to silence science, while a scientists' march on Washington is being contemplated.

"It's hard not to be discouraged in this environment," DeConcini said.

Still, she pointed to "slivers of hope" in inconsistencies between Trump's views and those of his Cabinet picks that emerged during their Senate confirmation hearings. While deeply troubled by several nominees' ties to the fossil fuel industry, she noted that Secretary of State Rex Tillerson, formerly CEO of Exxon Mobil Corporation, did not share the president's position that the U.S. should pull out of the Paris Agreement, saying it was important for the U.S. to maintain a seat at the table of the international accord for addressing climate change.

Likewise, she found Energy Secretary nominee Rick Perry's remarks "somewhat encouraging," in that he cited his record as Texas governor in reducing carbon emissions by 17 percent while maintaining one of the 15 largest economies in the world.

A recent Brookings Institute report found that between 2000 and 2014, 33 states, including Ohio, Pennsylvania, and West Virginia, had cut their carbon emissions while growing their economies, averaging 12 percent emissions reductions and 22 percent GDP growth.

But beyond searching for environmentally friendly needles in the Trump administration haystack, the Catholic Climate Covenant webinar stressed the actions each of its members and all Catholics alike can take.

DeConcini, herself Catholic, speculated that the faith community has more sway — and access — with Republicans than other environmental groups in raising concerns as they emerge.

"Your voices are powerful. You have pews and networks and organizations full of people, and all of them are someone's constituents in Congress," she said.

The speakers recommended first and foremost that people contact their own elected representatives, with phone calls or in-person visits, either in Washington or in their districts, as the most effective approach. One area identified for immediate action for Catholics was protecting international funding for developing countries to adapt to and mitigate to climate impacts. Trump while campaigning included in his 100-days plan ending billions of dollars in payments to United Nations climate programs.

Faith communities have had "a very strong voice" in protecting such funding in the past, DeConcini said, and articulating why it's necessary to help these countries lift their people out of poverty in a way that doesn't pollute their lands, waters and lungs. Maggie McCarty, Covenant associate director, said staff at the U.S. Conference of Catholic Bishops were combing the federal aid budget "looking for other avenues to ensure that we continue to help the most vulnerable: migrants, refugees, and people affected by climate change."

DeConcini suggested Catholics particularly reach out to three Republican senators on the appropriations committee: Susan Collins of Maine; Lindsey Graham of South Carolina, and Lisa Murkowski of Alaska. All three, she said, have shown support in the past for such aid and climate actions. Even for non-constituents of the three senators, the speakers said Catholics could lead with their faith in expressing their concerns.

Another congressional group suggested for targeting is the Climate Solutions Caucus in the House of Representatives. McCarty said the caucus is intent on maintaining its bipartisan balance (currently 10 Republicans, 10 Democrats) and urged Catholics with Republican representatives to encourage them to join.

Catholic Climate Covenant has scheduled a lobbying day for April 28, a day before the Climate March on Washington aligning with Trump's 100th day in office. The Covenant and other Catholic and faith groups are encouraging Catholics to join the D.C. march or sister marches around the country.

Such large demonstrations of resistance have value in their ability to cultivate a sense of solidarity and energizing, Misleh said, "but I believe that the really hard work is how do I talk to my pastor about this, about creation care, about climate change? How do I gather others in my community to understand the challenges that we face together? And how do I organize my community to act in concrete ways?"

Polling consistently shows Americans are concerned with environmental issues, but give it low priority compared to other issues or during elections.

Misleh raised the point that if just 5 percent of U.S. Catholics became actively engaged with caring for God's creation, as illustrated by Pope Francis in his encyclical "Laudato Si', on Care for Our Common Home," it would more than triple the one-million-plus U.S. membership of the World Wildlife Fund. The Covenant members encouraged Catholics to take advantage of its resources in establishing creation care teams and developing environmental programs at their parishes.

Misleh stressed that now more than ever the small tasks and local efforts gain in their importance and impact. Catholic Climate Covenant is currently piloting its Catholic Covenant Energies initiative in the Cincinnati archdiocese to reduce energy use in its buildings. But simpler energy conservation steps, such as using LED bulbs and sealing doors and windows, have the potential to magnify if taken in each of the 70,000 buildings owned by the Catholic church in the U.S.

"And as you do these things, make some noise about it," Misleh said, such as informing local news outlets about the projects but also the faith motivations driving them.

"Doing those kinds of things really can model to people that there are things we can do to continue to move forward despite a bad policy environment," DeConcini added.

'Now is a needy time'

More than public signs of Catholics' commitment to creation care, Misleh said parishes should also serve as spaces modeling morality-based discussions about societal challenges, including balancing environmental regulation and economic growth. He admitted feeling "out of touch" with voters who elected Trump, who he said is "touching a raw nerve that we must come to understand and to listen to."

"As the country becomes even more polarized — and it will become more polarized, I'm afraid — it will be up to us to seek the common good and find common ground," he said.

Finding an audience open to actions for the common good, especially those outside U.S. borders, will prove difficult in a time when nationalist messages are becoming more prevalent, Misleh acknowledged. But Catholics, he said, through organizations like Catholic Relief Services and other developmental aid agencies, are positioned to make the connections of why installing solar panels in San Diego can positively impact Pacific islanders whose homes are being submerged beneath rising seas.

"Part of our role, I think, as a Catholic community that's global — 1.2 billion Catholics around the world — is that we do have these connections globally," he told NCR.

The last bit of advice offered in the webinar was simple: Pray.

"If you're anything like me, you tend to drop to your knees more often in times of need rather than at times of thankfulness. Now is a needy time," Misleh said.

Added DeConcini, "Pray that hearts can soften and change, and miracles can happen."