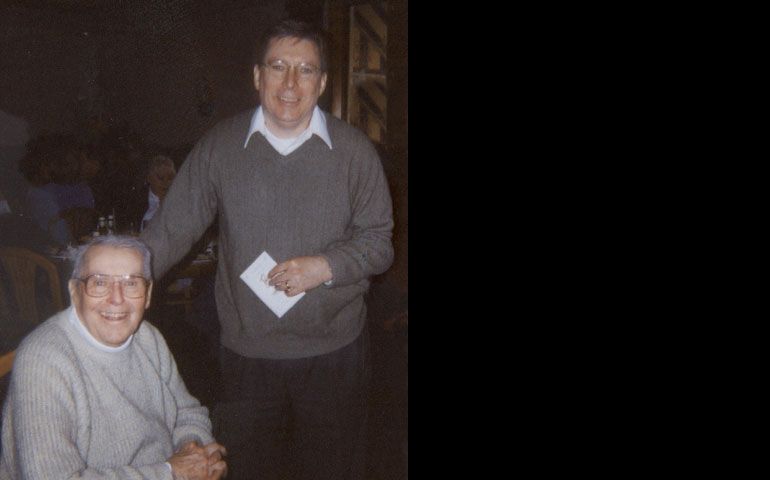 In the months before my dad died, he gave his family an intensive course in soul seeing. I would visit Dad after work as often as I could in his final months. Because Dad was prepared to face his mortality head-on, our visits became opportunities to plumb the depths of my own faith. One evening, Dad and I were watching a ballgame neither of us was interested in, so we turned it off. We sat in quiet for some time until Dad turned to me and asked, "So what do you think happens after we die? Do you believe there's a heaven?"

I knew this was not an idle question and I took my time before responding. I had to dig deep for the truth. I didn't want to lie to my father.

"There was a stretch of time when I didn't believe there was anything after this life," I said. "But the more I come to see the pattern of dying and rising in nature, as well as in my own life, the more certain I am that this pattern will continue. I have come to trust Jesus' promise of eternal life in my gut and not just hope for it in my fantasies."

Dad took that in. After a minute of silence, he slowly nodded. "I believe that, too," he said, and we talked about the evidence for that shared faith as experienced in our lives. That stands in my memory as the most honest and trusting conversation I ever had with my father. It opened the way to an extraordinary time of grace between us in his final days.

The Irish believe in "thin times and places," that is, places and occasions where the barrier between our physical world and the world of Spirit is so thin as to be easily breached. Dad's final month was a thin place. He began to see visitors -- St. Augustine arrived frequently, as did long-deceased neighbors from the block Dad grew up on. One night, Dad told me he'd had a visit from a priest from his seminary days. "He was our moral theology professor," Dad said. I asked, "So do you think he was here for your final?" Dad got the joke and we laughed until tears streamed down our faces.

One evening, my daughter Patti and I arrived at my parents' home and my mother told us that it had been a particularly hard day for Dad. His pain medication was no longer effective and the hospice nurse -- an angel of mercy -- was on her way with a medication that would provide more relief.

As we went into Dad's room I could see he was agitated and in pain. He greeted us with a forced smile and it was clear he couldn't get comfortable. A short time later, the hospice nurse arrived and administered the new medication. Within minutes, Dad was visibly relieved. He sunk back into his pillows and settled into a restful sleep. Within 10 minutes he awoke, refreshed. He looked at Patti and me with a serene smile.

Dad winked at us and said, "All in all, we're in pretty good shape."

I was flabbergasted. Clearly, Dad understood his situation: He was suffering a long and difficult diminishment. He had endured much suffering and many indignities and he knew there would be more as death drew near.

And yet, here he was smiling and saying, "All in all, we're in pretty good shape." Was this just the medicine talking?

Surely, the medication was a blessing and a major help to him, but the truth is that I had heard those words from him so many times before, down through the decades. Through a life of prayer, Dad had been given new eyes to see that "neither death nor life, neither angels nor demons, neither the present nor the future, nor any powers, neither height nor depth, nor anything else in all creation will be able to separate us from the love of God that is in Christ our Lord" (Romans 8:38-39).

I looked over at my daughter and I was deeply grateful she and I were present to witness this proclamation of the Gospel according to her grandfather that Advent evening. That was Dad's message to us as we prepared for the great transition he was about to experience.

Years later, my family still recalls those words when we're tempted to believe the glass is totally empty. Someone will break the spell of the negative by smiling and saying, "Remember, all in all, we're in pretty good shape." And the truth is, we are. Nothing can separate us from the love of God. Or from one another.

[Tom McGrath is vice president of product development at Loyola Press and a frequent speaker on men's spirituality.]

Spirituality | All in all, we're in pretty good shape

What kind of fool?

Expanding the circle of love

Fulfilling the song of the angels

Listening to God's word between Christmas and Lent