When we meet the judge of today's parable, we are quickly informed that the widow can't appeal to his good side -- he doesn't have one. So, faced with his stony heart, she becomes the water that drips incessantly until something is worn away. 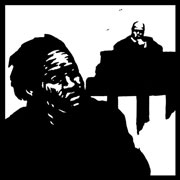 To understand this parable, we should pay careful attention to Luke's editorial comment: This is a parable about praying always and about never giving up. It's important to recognize that those are two interrelated ideas: to be constantly mindful of our relationship with God, and to persist in faith. As the song goes, "You can't have one without the other."

Interpreting the parable in that light may open new dimensions to its teaching. The widow in this story represents the praying disciple, while the judge presides over injustice. For what is the widow to pray? For whom does Jesus tell us to pray?

If we search the Gospel of Luke, we won't find Jesus saying, "Pray for one another," but rather, "Pray for those who mistreat you" (Luke 6:28).

The only time Jesus said he prayed for someone, he said it to Peter: "I have prayed that your own faith may not fail" (Luke 22:32). The implication seems to be that in a situation of seemingly interminable injustice, especially when we have no power to change it, we are called to pray for those who have the power, as well as for the perpetrators.

Now, while those represented by the widow are told to keep praying, Jesus doesn't say to do so in hiding. No, this widow's persistence is more than obvious to the judge and probably to the general public. A New Testament prototype for the Energizer Bunny, she just keeps coming and coming with her demand for justice.

It was like a staring contest between two 10-year-olds: In the end, one of them was going to give up, and we get the idea that she decided to keep at it or die trying. After all, her circumstances were such that she would probably die if her demands were not met. So she won Olympic gold for intractability. Since the judge would not move for love of God or human respect, she got him where it counted -- his desire for peace and quiet.

This is a story of salvation, but not as it appears at first glance. Sure, the widow finally got her due, but in the process, she saved the judge. She never gave up in her prayer or in the actions that flowed from it. She kept at it, asking for divine help while also devising the tactics that had the best chance of success. She made it easier for him to do right than wrong.

When we look to the widow as a model of prayer, few can do better than she did in making good on the petition "Thy kingdom come." In spite of what everyone knew and said about the judge, she wouldn't stop believing that God can transform hearts.

She refused to give in to the idea that he would never change. Like Moses, who kept holding up his staff over the outnumbered Israelite army, she refused to give up. There was no earthly reason to expect success, but if there had been, she would not have needed to pray as she did.

Of course, Jesus' audience probably chuckled at the story as they pictured the pompous judge coming around to do what the lady asked, trying to preserve his dignity as others snickered at seeing who had worn him down. But Jesus' last remark was designed to bring the disciples up short: "When the Son of Man comes, will he find faith on earth?" (Luke 18:8).

That's the question addressed to each of us. Do we really believe God's kingdom is germinating among us now? How far are we willing to go to cultivate it? Are we faith-filled enough to pray for those who mistreat us and for those who promote injustice? Do we desire the kind of faith that leads us to persist, as 2 Timothy suggests, whether it is convenient or inconvenient?

As we look around at our political situation, at the injustice and violence that plague our country and world, there is no earthly reason to believe that it can all change. That's precisely why our widow friend is held up to us as an example. Weariness is no excuse.

Prayer has been found to be effective. Prayer will awaken our memory of Jesus and remind us that the kingdom doesn't operate on the rules of this world.

We have seen the light

How George Harrison changed the way we believe

Space, time, change, reflection: Lent as it should be

City on a hill