Someone once said that a connoisseur of classical music is someone who can listen to Rossini's "William Tell Overture" and not think of "The Lone Ranger."

In the same vein, a real connoisseur of Scripture is someone who can listen to today's Gospel pericope and not think of the papacy. We Catholics have traditionally utilized Matthew 16:18 for our own purposes, making it the biblical basis for the authority structure we've created. It's almost impossible for most of us to hear the words "You are the rock and on this rock I am going to build my church," without visualizing St. Peter's Basilica, popes and bishops, crosiers and miters. 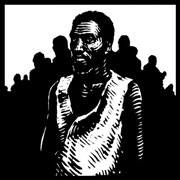 Yet Scripture scholars have been telling us for a long time that such visualization was neither in Matthew's mind nor in his theology. Just as creators of the Lone Ranger took Rossini's overture out of his original operatic context, so through the centuries, we Catholics have taken Matthew's words out of their original Gospel context.

Matthew is writing for a Jewish/Christian community: Jesus' followers who faithfully go to the synagogue every Saturday and still feel obligated to keep all 613 Mosaic Laws. They're the earliest Christians.

Matthew also seems to be writing for one of the last biblical communities still expecting Jesus' second coming to take place in the relatively near future. Unlike Luke's community, they're not yet into preparing for the long run. They're much more interested in the implications of living their faith right here and now, convinced that no matter what problems they face, the risen Jesus is present and working effectively in their lives.

That's where Peter comes in.

Our earliest Christian traditions zero in on Peter as the first of Jesus' followers to understand the faith implications of the empty tomb. Before anyone else, Peter, the Rock, believes that the risen Jesus is alive in the Christian community. Paul states in Galatians 3 that he's a "new creation," neither Jew nor gentile, slave nor free, man nor woman. Through his presence and the inspiration of his Spirit, the risen Jesus is still helping his followers in their commitment to imitate his dying and rising, especially in situations the historical Jesus never encountered or addressed.

When Jesus asks, "Who do people say the Son of Man is?", his disciples give the expected response: "John the Baptist ... Elijah ... Jeremiah or one of the prophets," judging Jesus through the filter of the past.

Peter, on the other hand, filters him through the present and the future: "You are the Christ, the Son of the living God." You're someone no one has ever before experienced.

Since this is the only time in Matthew's Gospel that any of Jesus' disciples makes a statement that is 100 percent correct, the evangelist is forced to have Jesus point out, "Flesh and blood has not revealed this to you, but my heavenly Father." In other words, no one comes to faith in the risen Jesus as the Son of God among us without God's help.

Peter's faith triggers Jesus' next statement, "I say to you, you are Rock, and upon this rock I will build my church." Jesus employs a play on words to tell the evangelist's readers that he's founding his community not just on a person, but on a person whose faith in the risen Jesus is at the center of his life -- as it should be at the center of every Christian's life. That faith is the rock that sets someone apart from others as Jesus' disciple. And nothing is more powerful than that faith, not even "the gates of the netherworld."

But that faith also helps the church "bind and loose." The Gospel's Jewish readers would have heard these words as referring to a rabbi's ability to bind someone to keep certain laws or free them from following them. It's important to note that two chapters later, in 18:18, Matthew's Jesus gives that identical assurance to the entire Christian community, not just to one person. And he follows up his promise with that same rock of faith at the heart of 16:18: "For where two or three are gathered together in my name, there am I in the midst of them."

Is it possible that through the centuries we've rooted our faith so much in the church's hierarchical structure, or in Jesus' presence in the Blessed Sacrament that we've overlooked the faith of our biblical ancestors, a faith in the risen Jesus' presence among them, a faith which empowered them to become other Christs? No wonder many of us grew up applying that title only to priests, who were part of the hierarchy and could preside at the Eucharist.

Feeding the hungry as a work of mercy

Chinese Bishop Shi, held in secret for years, dies at 94