St. Paul, in today's reading from Galatians, summarizes for us: "May I never boast except in the cross of our Lord Jesus Christ." With the urgency and detachment of the 72, we go forth daily, bearing the good news of Christ. Then, as St. Paul says, we will be "a new creation." 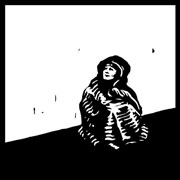 One internet ad for the Apple Watch promises you'll "never miss what matters" and explains that it's "you at a glance." It promises that this super gadget will become an essential part of who you are. The author of Hebrews would have understood the philosophical field where this ad grew up.

This final section of Hebrews is very much about helping people to discern what matters and understand who they are. The essential difference is that while Apple promises to put it all on your wrist, the author of Hebrews says we'll understand it through celebrating with a community.

This selection from Hebrews invites us to glimpse the future coming toward us from God. The God who made Moses' mountains rumble has prepared a festival in the holy city where everyone and everything is coming to perfection: the fullness, the joy of union with God and one another for which we were created -- something we have already but just barely tasted in moments of grace.

This is the sort of vision that freed Jesus to be just exactly who he was, whether on the road, praying alone or at a party. This week, Luke takes us to another party with Jesus. At times, Jesus must have felt like some of today's banquetgoers: unsure of what will be less pleasant, the lukewarm food or the people who attend just to be seen. In reality, we don't have a single story of a meal Jesus shared that didn't involve some sort of contention. (Why does he let her touch him? Why does he eat and drink with sinners? Why don't they wash their hands? Martha, Martha, the company is more important than the menu! And finally, "The hand of the one who will betray me is with me on the table.")

But then, Jesus brought enough wit to each situation that even if breaking bread with him was rarely peaceful, it was never boring. Perhaps that describes not just his meals, but the process of conversion that they call forth.

Ostensibly, this week's readings focus on humility, seemingly promoting it as a pragmatic approach even if it's not a deeply felt conviction. The Gospel scene in which the guests try to appear distinguished while at the same time vying for prime placement is one that begs for a Mark Twain depiction.

Was Jesus acting like a jester when he offered his suggestions for how the guests could ultimately get the recognition they craved by pretending it didn't matter? The problem there was that seating arrangements didn't matter to Jesus, while others believed their dignity depended on their social location. He and they operated on different planes.

The reading from Hebrews also deals with different planes, but in this case, they are temporal rather than social. Hebrews challenges us to place ourselves in biblical time and remember how our ancestors came to know and fear God. Then, just as we begin to grasp the utter awe of witnessing God's self-manifestation in frightening fire and deafening trumpet, the author says, "That's where you came from, but today you are somewhere else."

With that, we are given a glimpse of the future God has planned. It is symbolized as a holy city, with everyone totally taken up in inaugural festivities. There's a banquet on every block; ecstasy scents the air they breathe. Here, time is measured in quality rather than quantity.

The joy of this vision flows counterclockwise as our irresistibly appealing God draws everyone and everything toward the perfection for which we were created.

This vision of God's future freed Jesus. Knowing where he was going allowed him to be just exactly who he was at every table. As he watched folks jockey for position and saw the embarrassed host try to herd them into the right places, there had to be a playful glint in his eye as he whispered to some, "Go down lower, then he'll have to come find you!"

The twinkle surely grew when he said to the harried host, "Next time, invite the blind and the hungry. They won't notice where they sit as long as there's food."

Even if he said it lightheartedly, Jesus was serious about the guest list revision, and not just because the outcasts would be more interesting than the inner circle. Every meal he shared was an experience of communion. Exclusivity in such a setting is a sacrilege.

Seeking communion with people who are different from ourselves is a path toward conversion. It will be uncomfortable as our values get rearranged, but it will also be a practice round for enjoying the peace of communion at the festival God has prepared for us -- for all of us, without distinction.

[Mary M. McGlone is a Sister of St. Joseph of Carondelet and a historical theologian.]

A Christmas gift worth gold

Nunzio Sulprizio, a messenger that the church and world need right now