Have you run into those churchy types whose very presence makes you aware that you don't measure up? They don't have to publish their religious résumé. Something about their bearing broadcasts it without any need for a printed copy. 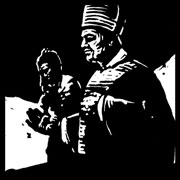 Some of them, as Jesus mentions in Matthew 23:5, display their distinction by their clothing, widening their phylacteries and lengthening the tassels on their garments. They look like the fans who sport the home colors -- except that they're claiming to be on God's team. Their uniform serves as an admission ticket to the best spot in the ecclesiastical environs.

This description is obviously a caricature, like the one Jesus drew of the Pharisee who went to the temple precincts flaunting his righteousness on both sleeves of his well-tailored cloak.

Of course, the other actor has to be equally overdrawn, the opposite of character No. 1, whom we might call Levi. No. 2, let's call him George, has pretty good clothes too; his shady profession allows him to purchase the best. But there's something about his walk that's different, ever more hesitant as he nears the place of prayer.

When he gets to the Temple, he's obviously not on his home turf. He doesn't remember exactly what he was taught to do here, but something has drawn him to the place, and it makes him at least a little uncomfortable.

Wouldn't you know that the two arrive at the same time? Levi is immediately aware of that fact and processes right past George, who's standing there, uncharacteristically too timid even to look around him. Surprisingly, Levi is glad to have seen George standing there. Compare and contrast is his favorite word game!

Now we get to the "prayer" of each. Speaking about Levi, Jesus says, "He took up his position," giving the impression that had he been Catholic, it would have been his pew ... up front and on Our Lady's side. (Though Mary would never say so, Levi knows she's more important than Joseph.)

While some might question whether Levi's words qualify as "prayer," Jesus leaves the question open to interpretation by saying that he "spoke this prayer to himself." He did begin by using God's title. If Levi intended to communicate with God, his message was basically something like, "Congratulations on your good judgment, it's understandable why you appreciate my accomplishments -- especially when one sees what a poor job others do." All that was missing in his self-aggrandizement was the use of the royal "we," also known as the "majestic plural."

There's not too much to say about George. He just stood there and prayed with his head bowed, striking his breast in self-incrimination. He didn't make himself anywhere near as interesting as Levi's imagination had! But he did go to God with a clear request. George's prayer gave God room to reply and to do what God does best: be merciful.

Today's reading from Sirach says that the prayer of the lowly pierces the heavens. That's exactly the point Jesus made with this story. God may not have favorites, but God can do no more with us than we will allow. There's no point in going to God if we only want to talk about ourselves and our plans for the world. God sees through all of that and finds tragic emptiness at the far end.

This is not to say that we are to put ourselves down as worthless. Paul gives us an example of genuine humility in his last testament, as recorded in today's selection from 2 Timothy.

Paul knows that he's done everything possible to fulfill his mission. He ran a good race and he didn't lose faith in God. That's exactly the combination that makes for living the Christian vocation. His mission came from God, and with the help of God, he completed it as best he could.

With a clear conscience, he can look forward to receiving the crown of righteousness, a gift for him and the others who long for God.

While Paul knows that he's done his best and believes God will bring him home, he doesn't single himself out. He doesn't have to. Something about his way of being points beyond himself because his prayer has always aimed toward God with hope and thanksgiving.

If we seek a one-line summary of what this week's Scriptures teach us about prayer, it might well be "Let God be God." And we can take that in many ways.

Pope to priests: Best place to be is among the people

Pope: Prayer is a humble dialogue, not a magic wand

Thank you, Jean Vanier, for teaching me to see