Have you ever suffered for your faith? Has any harm come to you because you believe in Jesus? 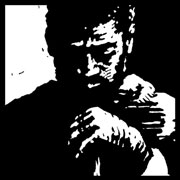 At this very moment, there are Christians being tortured and killed because they dared to admit that they are believers. According to the 1999 book Jesus Freaks: Stories of Those Who Stood for Jesus by DC Talk and the Voice of the Martyrs, there have been more Christian martyrs in modern times than there were in A.D. 100 in the Roman Empire. Close to 150,000 Christians were martyred in 1998, and the book estimated that 164,000 would be martyred in 1999.

Seventeen years later, news reports indicate that the numbers of those who are dying for their faith have increased steadily. Their stories have the power to feed our faith and fire our zeal if we but listen and learn.

Jeremiah's story is told in today's first reading. Because he dared to speak an unpopular truth to a disinterested and hostile people, he was thrown into a cistern and left to die. In the second reading, the author of Hebrews tells of the martyrdom of Jesus and encourages readers to be steadfast in their struggle against sin. The Lucan Gospel presents Jesus as a revolutionary who has come to set the world ablaze and be a source of division.

Each of these readings assures us that faith is a fight for truth, for justice, for mercy and for fidelity before God.

This fight was gallantly fought by Ivan Moiseyev, an 18-year-old Russian who in 1972 was beaten and then drowned because he refused to be silent about God. It was fought by 16th-century villagers in Flanders who were drowned, hanged, torn in pieces or burned alive for reading the Bible. In 1999, Roy Pontoh, a 15-year-old Indonesian boy, was hacked to death for refusing to renounce Jesus.

In the 1970s, communist soldiers in Asia shot a 16-year-old girl in the head for refusing to spit on the Bible. During the Korean War, communist officers killed a pastor and 27 members of his congregation by crushing them under a steamroller because they refused to deny Christ.

Almost every week, media reports include the horrors being perpetrated by self-proclaimed religious groups like Boko Haram, al-Shabaab, the Islamic State and the like. Just when it seems it can get no worse, it does.

How do we cope? How do we survive? How can we help to repair and renew so much that seems broken and doomed?

As I pondered the sorry situation in our world, an odd memory came to me. There is a Po-Boy bar and grill in our city of Hattiesburg, Miss. Cars passing by can see a very large painting on the outside wall of the restaurant. Depicted there in bright and eye-catching colors is a pelican with its large beak wide open. In its mouth is a frog, which is being swallowed whole; the only parts visible are its legs, squirming and struggling to be free. The caption under the painting reads: "Never give up!"

That frog has given me much to think about. Even though its situation is dire, it refuses to surrender without a fight.

Today, dire situations are commonplace in many parts of our world. Refugees are being refused; immigrants are turned away. The toll of human suffering is overwhelming in places like Syria, Yemen, Chad, Sudan, Egypt, Kenya, Turkey, Ethiopia, Somalia, India, Algeria, Libya, Afghanistan, Greece, France, Belgium ... to name only a handful. There are "pelicans" everywhere ready to gobble up helpless "frogs."

But we, as believers, know for certain that goodness will never be overcome by evil. It may seem that evil has the upper hand at times, but it will not prevail. Therefore, we hope, we pray, we give of our time, talent and treasure so that all God's people will know peace.

We also remember that we are not alone. The faithful who have gone before us and are united for all eternity in Jesus are a constantly renewable resource for those of us who still struggle. The Hebrews author describes these faithful as "so great a cloud of witnesses."

Paul -- who is now in glory with that great cloud of witnesses -- once said, "For our present troubles are quite small and won't last very long. Yet they produce for us an immeasurably great glory. ... So we don't look at the troubles ... rather, we look forward to what we have not yet seen. ... The joys to come will last forever" (2 Corinthians 4:17-18). Never give up!

Spirituality | Never give up!

The hunt for God's real presence in everyday life

Bringing God to the rhythms of our days

Pope calls all Catholics to be missionaries of God's mercy

Pew study: A third of US Catholics say their faith strengthened during pandemic

Connecting with God while at work