Listening to today's first reading is to know that a prophet's call is almost always the last element inserted into our biblical collection of the prophet's oracles. Only after a lifetime of delivering God's word does the prophet (or the prophet's disciples) receive some insight into what he or she was actually called to do. 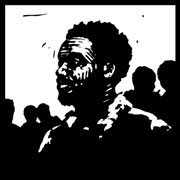 While the prophets are proclaiming that word, most have just small, intermittent insights into how their specific word fits into God's overall plan of salvation history. They're concerned with the here and now of their daily lives, and how their God-formed consciences force them to react to the people and events they encounter. Though we see the big picture, most of them didn't.

Neither are prophets normally in the business of predicting the future. Their ministry revolves around confronting, not predicting. When they do mention the future, it is -- as the late German professor of Old Testament Hans Walter Wolff always taught -- "to provide us with the future implications of our present actions."

In today's pericope, Jeremiah, at the end of his life, is reflecting on the fact that he was prepared for conflict. Though Yahweh doesn't pull any punches about the opposition the prophet will encounter, Yahweh also assures him that he'll eventually be taken care of: "Be not crushed on their account, as though I would leave you crushed before them; for it is I this day who have made you a fortified city, a pillar of iron, a wall of brass, against the whole land."

Those of us familiar with Jeremiah's "confessions" (Chapters 10-20) know that the prophet doesn't always feel God's presence in his ministry. On the contrary, in one of Scripture's most painful passages (20:14-18), Jeremiah laments that it might have been better had he never been born: "Did I come forth from the womb, to see sorrow and pain, to end my days in shame?"

Evidently, it's easier to see God's protection at the end of one's life than in the middle. It's also easier when looking back over the years to feel sure that the call from Yahweh wasn't just a figment of an overactive religious imagination.

"Before I formed you in the womb," Yahweh tells Jeremiah, "I knew you; before you were born, I dedicated you; a prophet to the nations I appointed you."

It would have helped Jeremiah immensely to have had such security while he was actually prophesying, but in the end, he seems to have come to that conclusion.

It's also important to remember that prophets almost never tell us anything new. They simply take beliefs and practices that we've relegated to the periphery of our faith and put them front and center.

Likewise, they throw to the periphery of our faith many of the beliefs and practices we've focused on exclusively for a long time. What we once thought was for "extra credit," they now insist is at the heart of our following of God. These truths have always been there, but we rarely noticed them.

Jesus does exactly this in today's Gospel passage. Though both Mark and Matthew narrate Jesus' conflict with his hometown synagogue members, only Luke carries it to the point where "they rose up, drove him out of the town, and led him to the brow of the hill on which their town had been built, to hurl him down headlong."

Like all prophets, Jesus tries to expand people's minds by getting them to refocus the eyes of their faith, and he suffers for doing so. The widow of Zarephath and Naaman the Syrian, he tells them, are just as important to God as any widow or leper in Israel. If God cares about everyone, so should God's people.

Almost 50 years after Jesus' death and resurrection, it's easy for Luke to see the hand of God in this painful development. He could apply the pattern of suffering found in previous prophets' lives to what Jesus experienced.

Luke knows the historical Jesus didn't go to his death believing he'd failed, though many of those to whom he preached rejected his message. Like other prophets, Jesus fulfilled his call, and the Gospels proclaim this years later.

Jesus and Jeremiah had a lot of faith to act and preach as they did. But they didn't have the benefit of seeing their lives and ministries with our hindsight.

The question is, how did they know day by day that they were saying and doing what God wanted them to say and do?

Even if we can't see the final results of our lives, whatever we do out of love will always have a significance far beyond anything we can imagine. Love alone changes and gives meaning to everything.

There's no other way to do it, even if our actions don't always make sense right here and now.

Spirituality | Use your gifts