Sparking a reformation that cares for the environment 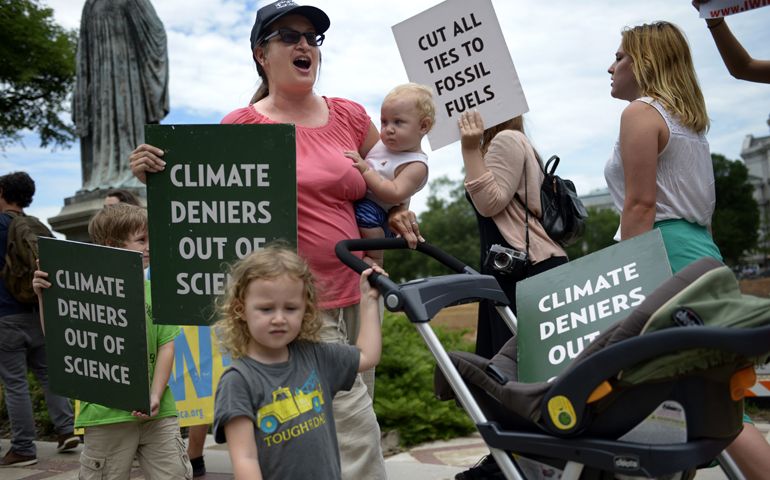 Protesters chant and display signs in front of the Smithsonian Castle during a 2015 anti-fossil fuel rally in Washington. (CNS/Shawn Thew, EPA)

I was having a tiresome conversation with a rising second-grader (my grandson) about the four elements.

I switched the subject, suggesting that the more important question was about the meaning of the word elemental, not how many elements there were. I told him that the kind of school he goes to used to be called "elementary," as in elementary school, a wonderful way of describing the basics and the foundational nature of children's education. I tried to get an audience for the three R's but that was way too high a hope. I told him the word elemental was like the word fundamental — and it meant what is really important, like the four elements.

Then I sprung my developmentally appropriate question. What is most important about fire? He knew right away, having missed the course in modesty early on: "It's knowing how to start a fire and how to put one out." I think he's right.

A month ago, we passed the 15th anniversary of what is now reduced to a conglomeration of tragedies, experiences, heroism and long-lasting impact called 9/11. Many of us would like to know how to put out that fire. We'd like to know how to get beyond working on terrorism and to start working on fossil fuel replacements. We'd like to stop fighting and start building. The biggest threat to the environment may be human and religious discord, which keeps us fighting rather than tending.

I like relaxing with a catalog every now and then. While browsing a copy of Hammacher Schlemmer, "America's oldest catalog," recently, I arrived at this description of an exclusive product: "This is the baseball cap with an inconspicuous camera that records high definition video." It made me pause, a reminder of terrorism or police violence in the midst of my shopping experience. I don't want to live in a world where I need self-protective personal headwear or have to buy it through luxury outlets.

I also wonder why so many of us are so addicted to our cellphones. Maybe they are also a derivative of 9/11? I've asked people why they are so connected to their cells. "Because if something happens, I want to be able to call someone." I do understand that. There is a kind of ghost safety in that being able to call. And many of us will take just about any safety we can get.

Our preoccupation with the old ways and the old days and the hurt already accumulated — and not released — has resulted in a lack of attention to earth and her glad ways. What if we need another reformation, one which stops the hurting and starts the healing?

On Oct. 31, the 500th anniversary of the Protestant Reformation, we're going to have a special service at Judson. It will memorialize those great 500 years. It will also be a celebration of the beginning of the first year of the next reformation.

In that year we are going to begin to put out the fire of interreligious hate. You know it well. You know it in impossible conversations about Israel and Palestine, and the havoc it is wreaking in the Black Lives Matter movement. The fire that is burning from hate between religions is out of control. We need to learn how to put it out.

We also need to learn how to spark a new religion, or not a completely new religion, but a reform for this historical moment. As important as it is to learn how to put fires out, there is also the question of starting fires and tending fires. We need to tend our environment and not just our human interactions and their difficulties. We need a new religion that respects nature as much as pagans did — and respects human agency as the current religions do. As any nature lover knows, it often takes a couple of hours rubbing two sticks — not two humans — together to get to a spark.

I imagine sparking a new fire and adding all the twigs I can find to that fire. Solar energy. Wind energy. Taxing fossil fuels even more deeply. Wearing baseball caps that don't have built-in cameras. Gathering in public spaces without fear and tons of security.

Maybe if we starve the old fights of oxygen and twigs, we will find the mental space to think anew. We may even find ourselves knee deep in a new reformation, the first year of which needed to start with yesterday. Elementary care of earth, air, fire, water — and ice — will help us be wonderful beginners at a new kind of religion and a new kind of earth.

Spirituality | Sparking a reformation that cares for the environment