Climate action gets smaller, one oasis at a time 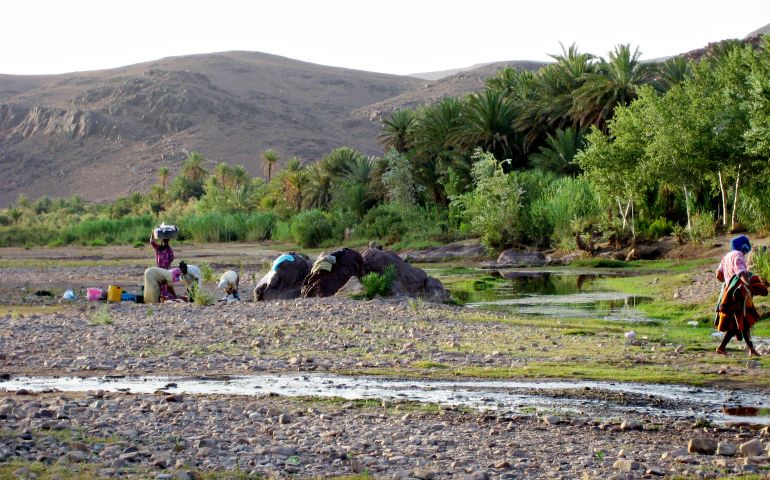 A view of Oasis Fint, near Ouarzazate, Morocco (Wikimedia Commons/Vysotsky)

Marrakech, Morocco — When thinking about climate chaos, which is different than climate change, geographical perspective is important.

I tend to start from my American shame and look out into darkness. My perspective is foggy because I figure I will probably be okay at the expense of many others. Stephen Covey of The 7 Habits for Highly Effective People fame calls this the difference between our circle of concern and our circle of influence.

My perch in the American Northeast is probably one of the safest and least chaotic places in the world. We did have Hurricane Sandy four years ago, placing us among the impacted, but there are still lots of trees, plenty of water, decent air quality. (There is often a strange competition for "most impacted" in the environmental movement — a contest no one really wants to win.)

We also have the interesting virtue of urban density that is actually, surprisingly, green.

I can probably afford a solar water heater priced at 400 euros I saw for sale in the Green Zone here at COP22, the United Nations climate change conference, and have it delivered.

I could probably have all my windows glazed with a second glass added and affixed with a silicone gel, which are understood to be the cheapest form of insulation and what the technology experts are advising for houses with windows.

I could probably learn to heat with fully combusted wood, another idea for women, especially in developing countries, where respiratory conditions are rampant due to smoke particles in the air from burning wood for cooking in enclosed spaces. But I have outdoor fires for recreation, not cooking.

Being in Africa for the last few days of COP22, I have had a good look at its light and my own darkness. Of the dozens of proud African national and transnational exhibits, most interesting to me is the one on oases. I only think of oasis in Hollywood or cartoon terms. You surely know the stubble-bearded man, stranded on an island with only a palm tree and himself. He may fully represent American individualism, run amok.

Oases are actually exquisite ecosystems that form an "arid scarf" that links Africa's Sahara Desert through Asia to Mongolia. Approximately 150 million have lived in oases for 2,000 years, according to RADDO, the Oases Associations Network composed of various North African groups that had one of the largest booths in COP22's Green Zone. The people who call oases home have done so through rigorous management of water and ground resources as well as a close partnership with the date palm tree. RADDO, "the voice of the oases," speaks of the way climate change is adversely impacting the oasis. They have a cannily simpatico view with this global conference.

Two of the biggest buzzwords here at COP22 are "subnational organizations." These are widely seen as the answer should nations fail in implementing the Paris Agreement, with its goal to limit average global temperature rise below 1.5 to 2 degrees Celsius by century's end.

Subnational organizations are organizations like RADDO or the Vatican or the Episcopal church, nongovernmental organizations, business associations and the like. They think of borders as more natural, like mountains and rivers and "scarves," rather than national in nature.

What does RADDO want? It wants the "respect of local habits and customs by political decision makers," the group explained in a statement. In other words, the oases imagine they will be better off without the world coming in.

Another big buzzword is "participation," or democratic participation. RADDO, too, agrees with this one, as do a number of other African organizations present at COP22.

The Center for Strategic Thinking and Defense of Democracy, based in Morocco, has one idea: Real people have to be involved in big policies. Participation is crucial. We need "a Human Rights based local mechanism containing indicators for evaluating the performance related to climate change," according to the center. Big words. Even bigger idea. And it has to learn how to get smaller, one oasis at a time.

Another thrilling African organization is House of Life, sponsored by the High Atlas Foundation. Founded by former U.S. Peace Corps volunteers, the foundation works with farming communities in the sale of certified organic product and carbon offsets. It uses what it calls a participator methodology.

House of Life denotes a traditional name for a Jewish cemetery. "Farm to fork" involves the free loan of land adjoining Jewish burial sites in order to establish organic tree and medicinal nurseries for the benefit of neighboring Muslim farm communities. Again, this "subnational," or mixed, organization has the participation mechanism built into itself. It may be local African but it is global in its direction and reach.

It is joined by a large microgardening project in the city of Dakar, Senegal, in being small in a big way.

It is possible that our new American president will go big and implement his 100-day plan and withdraw from the Paris accord while reopening lands and waters to drilling and supporting pipelines. There are clearly other big ideas floating around, like the looming threats of carbon tariffs on U.S. exports as recourse for American reversal in climate policy.

The politics involved in participation and in turning attention to "subgovernmental" organizations may look small at first sight. It is not, especially when collected.

[Donna Schaper is senior minister of Judson Memorial Church in New York City. She attended the final week of COP22 in Marrakech.]

World | Climate action gets smaller, one oasis at a time