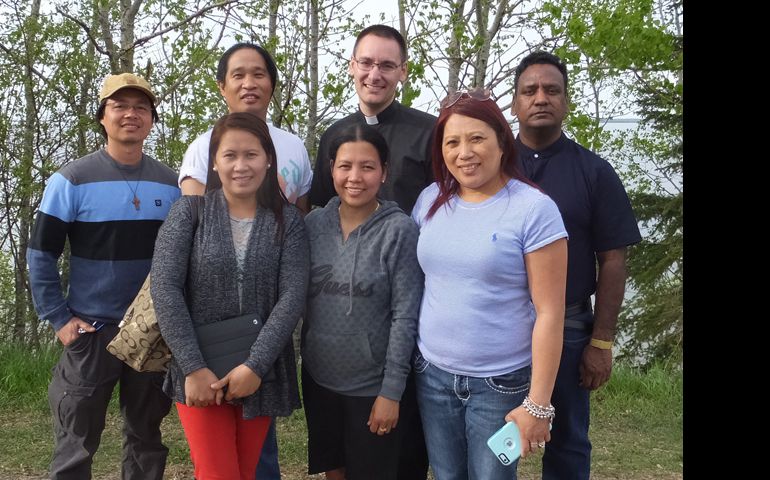 Edmonton, Alberta — The gang at EnviroClean Drycleaners in downtown Fort McMurray sticks together.

Not only do they run the dry-cleaning business, they provide the music ministry at 11:30 Mass every Sunday at St. John the Baptist Church. So when the wildfire disaster struck Fort McMurray, it was no surprise that they hung together.

Cindy Julapton, who runs the dry cleaner, heard the news the afternoon of May 3 that Fort McMurray's downtown was to be evacuated.

Her co-workers' neighborhood had already been evacuated, and so in their own car with their families, they followed Julapton to her home, where they picked up her two daughters -- Christine, 27, and Nikka, 22 -- and her sister.

Then they all set out on their meandering exodus that ended in Lac La Biche 27 hours later. En route, two of the cars ran out of gas.

"The fire and the smoke were terrifying," Julapton said. "My focus was to get out of there."

Throughout the journey, they prayed prayers of desperation: "Oh God! Please help us. Please save us."

By 1 a.m., Julapton was too tired to drive, so she pulled into the ditch to get a couple of hours of fitful sleep. The normal half-hour drive to Anzac to get breakfast and some gas took hours.

At one point, they pulled over because Julapton needed to rest for 15 minutes. A man from Lac La Biche stopped and offered them sandwiches, granola bars, orange juice, water and gasoline.

Near Conklin, their way was blocked by a car crash. Then they heard that a friend had been hurt in another car accident and was taken to Lac La Biche hospital. So, they headed off toward that town. By the time they arrived in Lac La Biche at 6:30 p.m. May 4, their friend had been picked up by his brother-in-law and taken to Camrose.

While Julapton was eager to head to Edmonton, the others wanted to go no farther.

"We decided to stick together" to avoid the loneliness of separation, she said. "We thought it would be two days and we would go back to our place."

When offered basic toiletry supplies and clothes at Lac La Biche's main evacuation center, she declined the offer, saying, "I've got those at home."

It was only on May 5 that "I came to realize our lives are going to be like this for a while."

Julapton and her crew were among a small handful of evacuees who attended the 5 p.m. Mass May 7 at Lac La Biche's St. Catherine Church.

"We just have gratefulness in our hearts right now," she said. "You believe in God, that God is always there for you."

She arrived in Fort McMurray 10 years ago from the Philippines.

"I love it there. We have a very good Filipino community there."

Julapton believes her home is undamaged because it is located downtown, close to the hospital, which firefighters made sure they saved.

Despite her safe escape from the wildfire, one question remains the focus of her attention: "I just want to know when we can go back to Fort McMurray."