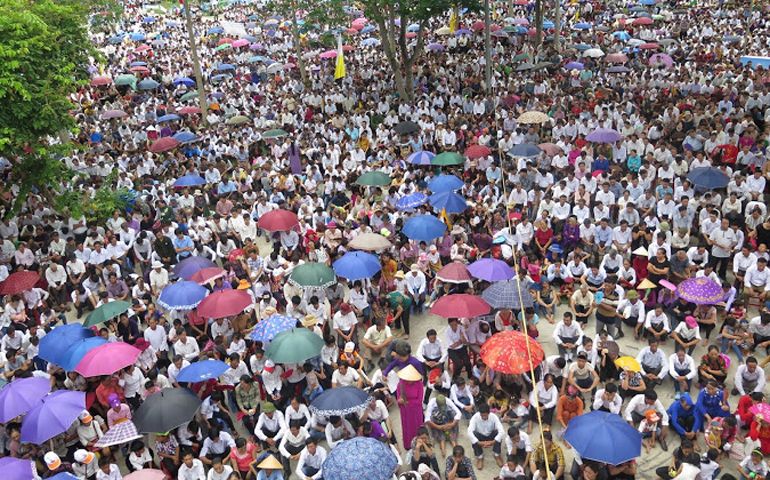 Tens of thousands of Catholics attending the feast of the Assumption celebrations in Vinh diocese, Vietnam, were urged to help victims of marine pollution and work to protect the environment. (Photo courtesy of Vinh diocese)

Catholics in the central Vietnamese diocese of Vinh who attended feast of the Assumption celebrations Aug. 15 were urged to help victims of marine pollution and to work to protect the environment.

Some 50,000 Catholics gathered in Xa Doai Cathedral and its square in Nghi Loc, Nghe An province for feast day celebrations. Among them were more than 1,500 parishioners who marched 5 kilometers from Nhan Hoa deanery to the cathedral, carrying banners reading "Close down Formosa," and "protecting the environment is protecting our life."

Fr. Joseph Nguyen Xuan Phuong, parish priest of Nhan Hoa, said they marched to protest the Taiwanese-built steel plant, a unit of Formosa Plastics, which allegedly discharged toxic waste, including phenol and cyanide, into the waters of four provinces, killing masses of fish in April. The plant is based in Ha Tinh province under the diocesan administration.

The priest said diocesan leaders asked Catholics to attend the feast of the Assumption celebrations to pray for national peace and prosperity, for the victims of the environmental disaster and that the country's leaders would protect the country.

In his homily, Bishop Paul Nguyen Thai Hop of Vinh said Mother Mary loves, supports and consoles her children around the world. She is concerned about people's sufferings and the injustices they face, he said.

"As Catholics and citizens, we have responsibility for our nation and younger generations and are determined to build a fairer and more humane society, protect the environment and express our solidarity with victims of the environment disaster," Hop told the congregation.

He urged parishioners to "exercise your civil rights as allowed by law, to moderately request transparency of governing the country and dealing with the disaster from the government, and ask the government to bring those who caused the disaster to justice and compensate victims properly."

Vietnam's Natural Resources and Environment Minister Tran Hong Ha said July 29 that Formosa had paid the first half of a $500 million fine that will be used to clean the water and compensate those affected. Agriculture and Rural Development Minister Nguyen Xuan Cuong said the ministry was counting the number of people whose livelihoods were hurt by the marine disaster.

Activists said the compensation is insufficient to pay the cost of cleaning the sea, a multi-year process, and to help hundreds of thousands of victims return to their normal life.

On Aug. 7, the diocese organized a "day for the environment" in all parishes to raise public awareness about environmental protection. They held Masses and the adoration of the Eucharist, conducted peaceful demonstrations and cleaned up garbage around the churches and parish buidlings.

The diocese's Justice and Peace Commission organized the event.

On July 27, the commission also petitioned the government to provide emergency aid to fishermen. "Many fishermen get into heavy debt due to losing [their] income and having no work," it said.

[Joachim Pham is a correspondent for National Catholic Reporter, based in Vietnam.]