Overtime for COP21 may synch deal signing with demonstrations 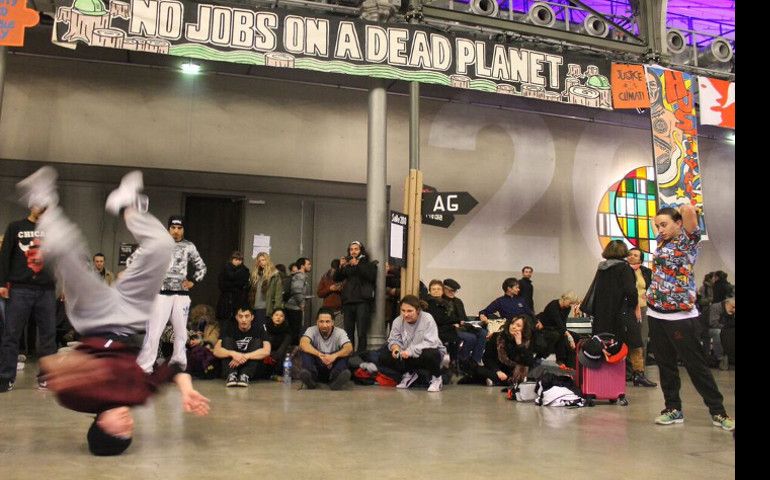 A break dancer shows their moves during a lull between speeches at the Climate Action zone in the Centquarte cultural center in Le Bourget, Paris. (NCR photo/Brian Roewe)
This article appears in the COP 21 Paris feature series. View the full series.

Paris — A 20-minute train ride and 10-minute walk away from central Paris north to the French capital’s 19th arrondissement, a different conference of the parties has occurred each night during the second week of COP21, the United Nations climate change conference.

Cautious optimism and bated hope fill corners of the official Le Bourget compound that diplomats there will ultimately come to some agreement aimed at committing all nations to collective action to reduce greenhouse gas emissions and shift the world toward clean energy development. Here at the Climate Action Zone -- an open, industrial creative arts space in a working class neighborhood -- a deeper pessimism permeates.

“We know the diplomatic games that [the United States and European Union] are playing and we know that they are trying to shift the responsibility that they have for halting climate change to other countries who did not create climate change, and we won’t tolerate it,” an activist from the United Kingdom said to applause and cheers Thursday night during an update on the status of the negotiations.

While the meeting at the off-COP Climate Action Zone moved forward -- with author and activist Naomi Klein set to speak later in the evening -- back at Le Bourget, the French minister leading the COP21 proceedings unveiled the latest version of the agreement. Hours later, news broke that the deal wouldn’t come on Friday, COP21’s final scheduled day, but that the proceedings would extend at least an extra day.

The new text removed brackets from the temperature goal, stating it as “well below” 2 degrees Celsius (3.6 degrees Fahrenheit) compared to pre-industrial levels, “and to pursue efforts to limit” the increase to 1.5 degrees. On Thursday, the Climate Vulnerable Forum, a partnership of countries at great risk to global warming, said the Vatican joined the 100-plus nations in endorsing the 1.5 target after a meeting with senior Philippine officials.

“We hope the Vatican’s position can give strength to the remaining countries hesitating to support real climate ambition,” Nereus Acosta, the Philippines’ presidential adviser on environmental protection, said in a press release.

Word choice holds significant weight at the U.N., said Bernd Nilles, executive director of the Catholic development coalition CIDSE and a member of the Holy See delegation. He told NCR that while the inclusion of the 1.5 target was a victory, without reference to decarbonization it’s a destination without a map to get there.

“That means we have no real goal to decarbonize to actually allow us to arrive at the temperature,” he said Friday. The lack of specificity on when “in the second half of the century” actually occurs factors into the reality of reaching the temperature target.

In addition, the text elected for “food production” over “food security” and removed the reference to human rights -- an important issue for many of the Catholic and faith organizations present here -- from the main body of the text, limiting it to the non-binding preamble.

Given the changes and limited time remaining, Nilles said it appears the agreement will leave many disappointed.

“We won’t get an agreement that is respecting many of the things that had been said before -- fair, ambitious, binding -- and we will definitely not have mechanisms in place that secure that what they promise from Paris will ultimately be reached. These are the two main deficits,” he said.

Still, he said the issues of ambition (decarbonization and by when), differentiation (how much developed and developing nations are held to reduce emissions), and finance (what money developing nations receive for developing clean technology) remained on the negotiating table. Add to that the legal status of the deal, which remains unclear at this point.

The negotiators received an extension to hash out the remaining sticking points to a climate deal, as the French minister leading the proceedings announced the Paris summit, like many before it, would spill into overtime. Instead of ratifying an agreement, Laurent Fabius, COP21 president, has spent the day in “intensive consultations,” according to the U.N., on the outstanding issues. Fabius has set the next meeting of his Committee of Paris for 9 a.m. Saturday, when he is expected to present to the 195 party nations a final version of the draft deal.

Should that schedule hold, it could align a potential signing with a series of demonstrations around Paris and at the Le Bourget site -- despite the ban on mass gatherings following the terrorist attacks here last month. Well before the Nov. 13 attacks, activist groups had set aside Dec. 12 as a day for demonstration, eager to ensure they have the final word in climate negotiations they doubted would live up to the high hopes placed on them.

At least one action will have people first assemble at the Arc de Triomphe at noon and from there hundreds of people with red umbrellas will form a mile-long “red line,” which organizers say symbolizes a commitment to defending common homes, along the Avenue de la Grande Armee. The demonstration will also include a two-minute moment of silence for victims of climate crimes.

A travel advisory issued Thursday by the U.S. embassy in Paris described an apparent separate action where protesters plan to gather in five areas of France before converging in Le Bourget, where they would form a circle around the U.N. climate complex. From there, they would head to La Place de Republique, an expansive public square in Paris where protestors set up a “virtual march” of 22,000 shoes – including the pope’s – in lieu of the city’s canceled leg of the Global Climate March on Nov. 29.

At the meeting Thursday at the Climate Action Zone, operated by the 100-plus-organization Climate Coalition 21, several speakers discussed the upcoming protests.

“Don’t be afraid to disobey! It’s the only way to go ahead!” said one who added he has safely taken part in five demonstrations, including two that day.

Carrying the vibe of a kind-of climate underground, the Centquarte cultural center pulsed with energy among an all-ages crowd that skewed heavily toward youth. Backpackers in dreadlocks walked in from the chilly Paris evening, passing a square Earth art installation and the Climate Ribbon tree while a break-dancing circle on the cold concrete floor broke out to fill the time between speeches. Above them posters hung stating “Climat: A Qui Profite Le Chaos??” and “No jobs on a dead planet.”

While not exactly a scene out of “Les Miserables,” they had their own songs of angry men, to the tune of “Down with climate criminals!” and “Ban fracking!” But rather than revolution, they exuded unrest toward the slow pace of negotiations and inability of delegates to perceive the climate problem in the same perils as they did.

The Climate Action Zone planned to offer training to any who wanted to join, emphasizing non-violent demonstrating. In explaining the security measures necessary even at the arts center, a Frenchman described how “the shock is still here” from the attacks.

“We always said that we’re going to have the last word here in Paris, but we also said that’s going to extend beyond Paris. Because we know that what they’re talking about out there will not bring about the changes we know to be necessary, will not bring about climate justice. We, the social movements, have to step up our game,” a speaker said to cheers.

[Brian Roewe is an NCR staff writer. His email address is broewe@ncronline.org. Follow him on Twitter: @BrianRoewe]

World | Overtime for COP21 may synch deal signing with demonstrations