Peruvian court: Indigenous communities must be consulted before drilling 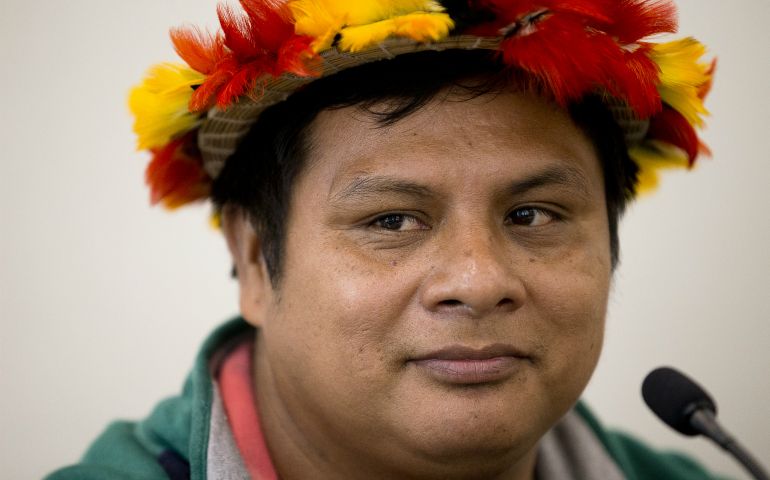 Zebelio Kayap Jempekit, an Awajun leader in northern Peru, is seen in Washington March 21. He described the fouling of rivers -- his people's only source of water for drinking, cooking and bathing -- because of mining and oil operations. (CNS photo/Tyler Orsburn)

Lima, Peru — A Peruvian court has upheld the right of Awajun and Wampis indigenous communities to be consulted about oil drilling on their land, in a case supported by Catholic Church leaders.

The court ordered the government to ensure that two oil companies, one French and one Canadian, suspend operations and withdraw from the lease known as Block 116, in Peru's northern Amazonas and Loreto regions, until a consultation is held.

"The decision shows that life and health are more important than economic activities," said Zebelio Kayap Jempekit, an Awajun leader who is a plaintiff in the case.

Just days before the March 28 ruling, Kayap testified before the Inter-American Commission on Human Rights in Washington, with indigenous leaders from other South American countries and representatives of the church's Pan-Amazonian Church Network, known by its Spanish acronym as REPAM.

"The court decision requires the government to review the way it deals with indigenous peoples in cases involving large industrial projects (and) find a solution that allows it to promote investment while also respecting the rights of indigenous peoples and national and international environmental standards," said Ismael Vega Diaz, director of the Amazonian Center for Anthropology and Practical Application, founded by the Peruvian Catholic Church to advise the bishops on Amazonian issues.

The ruling that the government should have consulted the Awajun communities before the lease was signed and before the environmental impact statement was approved is the first of its kind for petroleum operations in Peru, said Juan Carlos Ruiz, a Catholic lawyer with the non-profit Legal Defense Institute, which is handling the case.

Industry leaders immediately criticized the decision, saying it would scare away industrial investors and rob the country of revenue needed to fight poverty.

But Vega said, "The best way to guarantee private investment and promote (economic) growth is by complying with the law."

Some of Peru's poorest regions have a long history of oil production and mining that have not benefited local communities, he said.

The court decision is especially important because the lease on Block 116 was signed in 2006, five years before Peru passed a law requiring that indigenous communities be consulted about development projects in their territories.

The court ruled that communities should have been consulted even before the law took effect, because of an international treaty on indigenous people's rights that Peru ratified in 1994. That treaty includes a provision requiring that indigenous communities be consulted about development projects or laws that would affect their collective rights, such as territorial rights.

Although government officials said they would appeal the decision, Ruiz said it could affect other oil leases in the country that pre-date Peru's 2011 prior consultation law.

Kayap praised the court's decision, but said the oil operations and a mining operation in Awajun territory have already affected communities. Both the oil wells and the mine have polluted rivers and streams that are the communities' only sources of water for drinking, cooking, washing and bathing, he said.

Communities that were historically close knit have split over whether to support oil and mining operations, he said. Some now have rival leaders, with one backing the companies while the other opposes operations.

Leaders who have defended the right to be consulted have been branded terrorists by local politicians and media, Kayap said. That word is especially charged in Peru, where tens of thousands of people died during a conflict between government security forces and two subversive groups in the 1980s and 1990s.

"We don't deserve to be denounced. The ones who pollute the water are the ones who should be investigated," Kayap said.

The audience before the Inter-American Court of Human Rights and meetings in Washington with organizations that defend indigenous and environmental rights strengthened Kayap's resolve to fight for his people's territory.

The visit was preceded by a workshop, sponsored by the Pan-Amazonian Church Network, in which Kayap and indigenous leaders from Brazil, Bolivia, Ecuador and Colombia learned from each other's experience, the Awajun leader said.

World | Peruvian court: Indigenous communities must be consulted before drilling