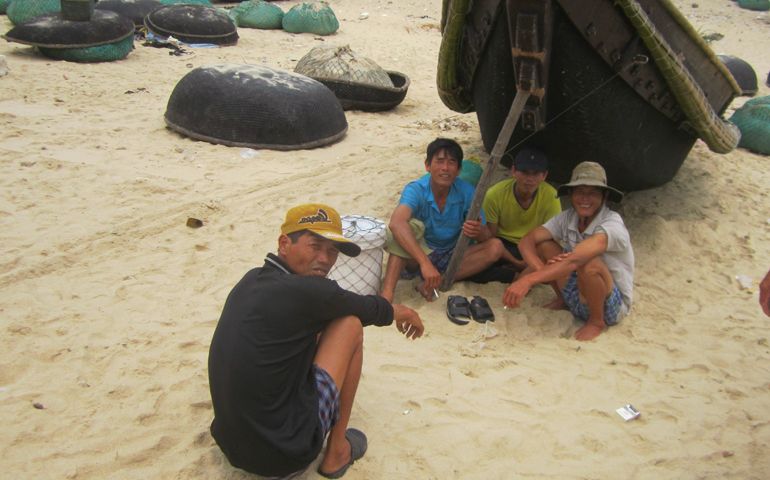 Hue City, Vietnam — Michael Vo Van Hong, a thin and haggard fisherman, has had nothing to do for a living for the past three months.

Every day now he sits for hours in his shabby house watching the sea where he and other fishermen used to catch various fish for a living. Then he tends to his fishing boat and nets.

"I miss fishing a lot and am longing to catch fish again, but all the fish are no longer in our waters," Hong said with a low voice. He is from the Lang Co parish in Phu Loc district, Thua Thien Hue province, central Vietnam.

Vu Van Tam, vice minister of Agriculture and Rural Development, said at a national meeting on June 29 that fishermen in the four provinces lost 76,000 tons of seafood due to the marine pollution. Thua Thien Hue province suffered losses of 14,660 tons of seafood.

On June 30, Natural Resources and Environment Minister Tran Hong Ha said at a press conference in Hanoi that toxic waste, including phenol and cyanide, from a Taiwanese-built steel plant, a unit of Formosa Plastics, poisoned the waters. A drainage pipe connected to the facility based in Ha Tinh province allegedly discharged 10,240 cubic meters of toxic waste into the sea each day, he estimated.

Ha also said Formosa agreed to pay $500 million in recompense for damages it caused to the people and the environment.

It has taken the Vietnam government nearly 3 months to announce the cause of the pollution, though the steel plant has been suspected since April.

The coastal provinces of central Vietnam depend heavily on the fishing industry that exported $6.7 billion in shrimp, catfish, tuna and other seafood last year, according to Vietnam exporter statistics.

Hong said he still sees strange-looking dead fish being collected along the beach where small crustaceans such as sand crabs no longer exist.

"It will take at least from one to three years for the sea to return to its normal condition," projected the 38-year-old, whose relatives have fished for generations.

Hong said his five-member family have mainly lived on rice subsidized monthly by the government. Since May, fishermen and salt workers affected by the marine pollution have been given 15 kilograms (33 pounds) of rice a month.

His wife and three kids in fifth and eighth grades, who are on summer vacation, have to work for a small restaurant, earning 150,000 dong ($6.70) a day.

"We do not know how we will live in the future. We need jobs to get money to cover my children's school fees and repay loans to the bank," he said. The new academic year begins in September.

His family has not had enough money to pay the bank for two months. His monthly rate of interest will be increased next year.

Other people in the area have been in the same situation.

Agnes Ho Thi Kieu, a former fish seller at Phu Loc market, said people refused to buy fish for fear of being contaminated, so she was forced to give up her job. "I am now working for a pork butcher and earning only 40,000 dong ($1.79) a day for a living," the mother of two children said.

She and her husband have left home to seek jobs in Phan Thiet City to support the family.

Huynh Thi My Le, an owner of a small restaurant at Chu Lai Beach, said few tourists dared to spend their holidays there for fear that the sea was contaminated. "I still owe the bank 100 million dong ($4,483). Now I have to sell furniture and television sets to buy food for the family," she added.

Fr. Anthony Nguyen Ngoc Ha, head of Caritas in the Hue archdiocese that covers two provinces, said that 20 parishes have been badly affected by the marine pollution. Some of them are lacking basic food.

"We have offered money and 5 tonnes of rice to affected fishing communities regardless of their backgrounds," Ha said. "We will continue to collect donations from benefactors and give to the victims until they can fish again."

He said Caritas plans to conduct courses in vocational skills for local people needing to change how they make a living.

Although they have no money to help victims, many sisters in Hue City are visiting and consoling victims. St. Paul de Chartres Sisters in Hue said they wrote to their friends abroad to support victims.

On June 20, a group of American volunteers led by Sister of Mercy Anna Nguyen Thi Hang visited and donated rice, instant noodles and money to 300 households in Phu Hai commune.

"We want to share something with you as our deep communion with you. We will continue to make donations to help you in the future," Hang told beneficiaries.

[Joachim Pham is a correspondent for National Catholic Reporter, based in Vietnam.]