Religious and indigenous leaders seek to save rainforests 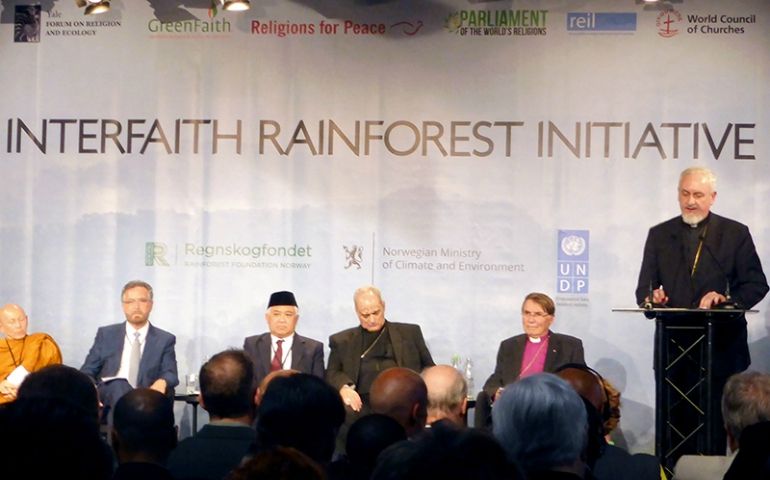 Metropolitan Emmanuel, right, of the Orthodox Church of France gives a speech during a meeting with religious leaders on ways to protect tropical rainforests from threats in Oslo, Norway, on June 19, 2017. (Courtesy of Reuters/Alister Doyle)

Rome — Religious and indigenous leaders from 21 countries gathered in Norway June 19 to launch a new initiative aimed at saving the world's tropical rainforests from the impact of deforestation and climate change.

It was the first time leaders from Catholic, Protestant Jewish, Buddhist and other faiths joined indigenous leaders from Brazil, Peru, Indonesia, Colombia and the Democratic Republic of the Congo to call for urgent action to protect the forests.

Inspired by Pope Francis' outspoken stance on global warming and overdevelopment in his 2015 "Laudato Si'" encyclical, the groundbreaking event was held in Oslo and backed by Norway’s King Harald V.

"Without the forests we do not have life; we live thanks to the forests," Monsignor Marcelo Sanchez Sorondo, who heads the Vatican's Pontifical Academy of Sciences, told the conference.

"If we continue to do deforestation, it is like suicide. We need to act together to defend our common house."

The conference was told the size of tropical rainforests in South America, sub-Saharan Africa and Asia is falling rapidly due to palm oil, soy and crop production, and extensive mining and logging operations with annual losses equal to an area the size of Austria.

Vicky Tauli-Corpuz, an indigenous leader for the Kankana-ey Igorot people in the Philippines, is U.N. special rapporteur on the rights of indigenous peoples.

She said that forest communities had put their lives on the line to care for the planet's tropical forests and the conference was the first step towards critical collaboration.

"Many of these dominant religions have been linked to the colonization of our communities," she told RNS. "It is important that they come together to support the indigenous people who are the main guardians of the forest."

Tauli-Corpuz, who led community opposition to logging expansion under the late Philippine President Ferdinand Marcos, said deforestation and mining had taken their toll on her community of 1 million people in northern Luzon and others in the Philippines.

"We are nothing without our forests," she said. "Our culture, our spirituality, our livelihoods, our incomes and our health are tied to them."

Tauli-Corpuz said she hoped the Oslo talks would lead to more cooperation with indigenous people and stop the violation of their rights. "These are concrete things that can happen," she said.

Din Syamsuddin is a professor of Islamic thought who also heads a center for promoting dialogue between civilizations in Jakarta, Indonesia. He said respecting nature was included in the teachings of the Quran and it was time to educate a new generation about saving the forests.

"Conserving rainforests is timely; sustainability is the responsibility of all, before it is too late," he told the Oslo conference. "Why don't we start now?"

Rabbi David Rosen, international director of interreligious affairs at the American Jewish Committee, said the world is "a divine creation" and that he also believes there is a moral responsibility to protect it for future generations.

The Oslo conference was organized by Norway’s International Climate and Forest Initiative, Rainforest Foundation Norway and the U.N. Development Program, in cooperation with the Forum on Religion and Ecology at Yale University, the World Council of Churches and others.

Participants hope to follow up with an action plan and a global interfaith rainforest summit in 2018.

"Given what we are hearing from religious and indigenous leaders worldwide, we believe we can create a global movement around this shared vision."

World | Religious and indigenous leaders seek to save rainforests