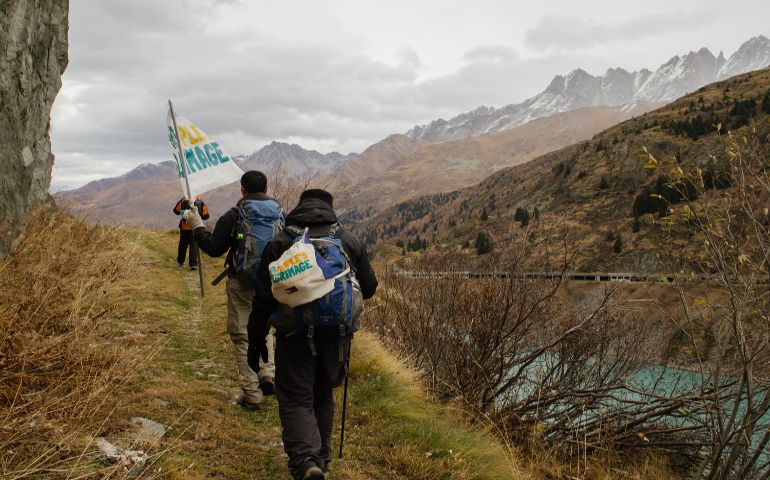 The People's Pilgrimage for the climate crosses the Alps Nov. 3. (OurVoices/Alex Price)
This article appears in the COP 21 Paris feature series. View the full series.

The resounding refrain out of France following the mid-November terrorist attacks carried out in its capital city was succinct:

That included a global gathering that would assemble world leaders in a temporary city north of Paris to ratify a binding deal to collectively address climate change. The 21st Conference of the Parties of the United Nations Framework Convention on Climate Change, or COP21, anticipated as NCR went to press on Nov. 24 upward of 40,000 participants to descend upon the Le Bourget suburb Nov. 30-Dec. 11 for the annual summit.

The high-level climate negotiations have fostered enormous expectations across the globe — including inside the Vatican — as many view Paris as the first substantial opportunity to commit all nations to curbing greenhouse gas emissions since the limited 1997 Kyoto Protocol and the failed 2009 Copenhagen talks.

The hope is that an agreement in Paris will place the planet on a path to limit global warming below 2 degrees Celsius, while transitioning to a carbon-free economy and energy system and aiding vulnerable communities in their response to already-present climate impacts.

Days after terrorists affiliated with the Islamic State group on Nov. 13 coordinated a series of attacks in Paris that killed 130 people, French Foreign Minister Laurent Fabius, president of COP21, said the summit remained on schedule.

Officials for U.S. President Barack Obama also confirmed his scheduled attendance in Paris. In rejecting the Keystone XL transnational pipeline, Obama said he did so in part not to "undercut" U.S. leadership on climate change.

While COP21 will proceed, it will do so in a truncated fashion. The U.N. cut back on press and civil society access, and the French government canceled two massive marches initially set to bookend the summit. While Fabius assured that the 300-plus civil society events would proceed, some uncertainty remained.

"We're just going to wait and see what settles out after a couple of days," said Ursuline Sr. Michele Morek, coalition coordinator for UNANIMA International, which represents more than 20,000 sisters around the globe.

Morek and several other women religious at the U.N. still planned to head to France as official members of civil society able to attend governmental meetings. That includes Medical Mission Sr. Celine Paramunda, despite discouragement from her family in India.

"I see it as an opportunity, that this event should bring the nations together and address the root causes rather than look at the symptoms," she told NCR.

"As France declared war on ISIS, I must say that the war should be not only on ISIS, it should be on greed," she added. "It is greed and social injustice which brings out all the symptoms, including poverty, violence, climate change, et cetera."

In neighboring Belgium, Bernd Nilles and his staff at CIDSE, a network of 17 international Catholic development agencies, worried about colleagues in Paris while police operations raided parts of Brussels in search of Islamic State cells and temporarily shut down portions of the city.

"For us, being based in Brussels, these were also not easy days," said Nilles, CIDSE secretary general, who was appointed to the Holy See delegation to COP21.

More than heightened security, the Paris attacks drew to the fore possible links between climate change and terrorism. During the Democratic presidential debate Nov. 14, Sen. Bernie Sanders (I-Vt.) stated, "Climate change is directly related to the growth of terrorism." He added that without action, countries worldwide are "going to be struggling over limited amounts of water, limited amounts of land to grow their crops, and you're going to see all kinds of international conflict."

Next-day commentary scrutinized the remarks as overstatement, with the consensus that climate change is a "threat multiplier" exacerbating other challenges: for instance, drought as one of many factors leading to Syria's civil war.

Since last year's U.N. climate talks in Lima, Peru, Pope Francis has voiced both his frustration with the lack of international progress on climate and his desire to play an influential role before the next round.

"Let's hope that in Paris the delegates will be more courageous and will move forward with this," he told journalists on the papal plane in January.

In "Laudato Si', on Care for Our Common Home," Francis stated, "With regard to climate change, the advances have been regrettably few. Reducing greenhouse gases requires honesty, courage and responsibility, above all on the part of those countries which are more powerful and pollute the most."

He continued: "International negotiations cannot make significant progress due to positions taken by countries which place their national interests above the global common good. Those who will have to suffer the consequences of what we are trying to hide will not forget this failure of conscience and responsibility. … We believers cannot fail to ask God for a positive outcome to the present discussions, so that future generations will not have to suffer the effects of our ill-advised delays."

Equipped with the encyclical, Catholics re-upped their resolve to push leaders toward securing a deal. In October, the heads of continental bishops' conferences issued an appeal "pleading for a major breakthrough in Paris" and outlined 10 points to a successful agreement.

The Vatican delegation in Paris will include Cardinal Peter Turkson, head of the Pontifical Council for Justice and Peace; Cardinal Pietro Parolin, Vatican secretary of state; and Archbishop Bernardito Auza, the Holy See's permanent observer to the U.N.

The pilgrimage was set to arrive Nov. 28 in Paris, merging there with other faith-focused campaigns. That same day, the Global Catholic Climate Movement's "Month of Climate Action" culminates as its members, including retired Cardinal Claudio Hummes of São Paulo, Brazil, present the Catholic Climate Petition to U.N. and French officials.

Outside the Catholic church, leaders of the Islamic, Hindu and Buddhist faiths each issued pre-COP21 declarations for climate action. Numerous faith groups had planned on Nov. 29 to join nearly half a million people in the Global Climate March through the French capital's streets, but the event and its follow-up on Dec. 12 were called off after the terror attacks.

Both Morek and Paramunda had expected to march and expressed disappointment at the cancellations, seeing them as important displays of public sentiment.

"Now [negotiators] come in a very different setting, not under pressure by hundreds of thousands in the streets," Nilles said.

While terror has raised security in Paris, it has done little to lower expectations for a potential deal. In its COP21 position paper, CIDSE asks delegates to enshrine the 1.5 degrees warming threshold into a legally binding global agreement with five-year reviews; by 2050 achieve complete decarbonization and 100-percent renewable energy access for all; fulfill commitments to the Green Climate Fund; and prevent threats to human rights, particularly those related to food, land and water.

One side event hosted by CIDSE and Caritas Internationalis during COP21 seeks to clarify the human rights link. Nilles said while the draft document's preamble references a human right to the climate — as Francis articulates in Laudato Si' — he and others hope to strengthen it in the body of the final document.

The Lima Accord held the 195 member states of the U.N. to make emissions-reducing pledges. An October accounting of 146 national action plans — representing 86 percent of global emissions — determined they would curtail global temperature rise to around 3 degrees Celsius by 2100.

"It's clear that Paris has to deliver more," Nilles said.

Paramunda said that nongovernmental organizations have stressed a human-rights based approach to sustainable development in the agreement, in addition to technology sharing between developed and developing nations.

While "business as usual" talk persists at the U.N., she has optimism for a deal, in part due to increased discussions following Francis' encyclical about the world's collective responsibility to address climate change.

"There is a lot of talk about our common home," she said.

Morek said she would be happy to see countries reach a doable agreement, rather than make grander promises not likely to materialize.