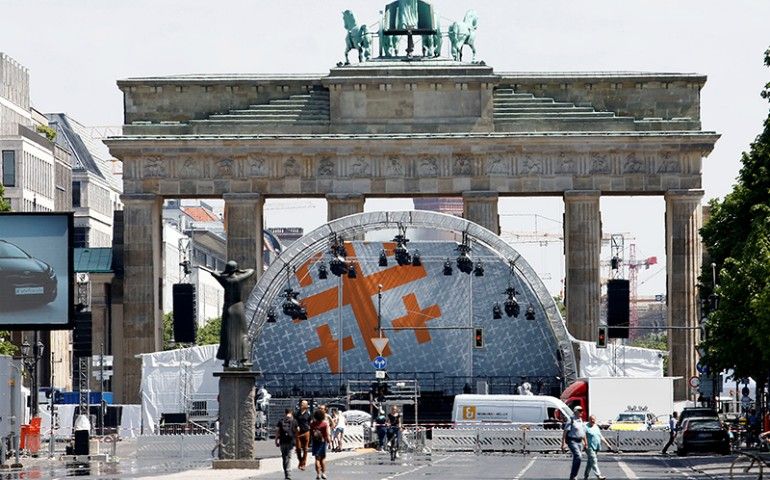 Final preparations are made at the Brandenburg Gate ahead of the German Protestant church congress (Kirchentag) in Berlin on May 23, 2017. (Reuters/Fabrizio Bensch)

The Volkswagen emissions scandal, which began when its "clean diesel" cars were found to be rigged to cheat on pollution tests, has created an environmental, commercial and public relations crisis for the German automaker in the United States.

It has been all that and worse back home in Germany. VW is a national symbol with contacts and influence far beyond just cars and drivers — and that is now posing an unexpected ethical challenge for the country's Protestant churches.

Starting on May 24, the Protestant Church Assembly, held every two years, will draw about 140,000 people to Berlin for a long weekend of religious services, political discussions and concerts. Some 200,000 are expected at the final service on Sunday in Wittenberg, where Martin Luther posted his 95 Theses in 1517.

At issue is whether the assembly, where concern for the environment and sustainable development are widely held values, should be ferrying speakers and participants around in the 239 Volkswagen cars, vans and trucks provided by its corporate sponsor.

Since this year is the 500th anniversary of the Protestant Reformation, one leading critic has come up with a slogan resonant with Martin Luther's own pithy way of speaking.

"I would not want to know what Martin Luther would say today," he said, referring to Luther's famous condemnation of the indulgences the Roman Catholic Church of his day was selling to help finance the construction of St. Peter's Basilica at the Vatican.

The assembly, known even abroad by its German name "Kirchentag," traditionally includes high-level debates on Christians' role in public affairs and regularly gets wide media coverage.

One of its main events will come on Thursday, when former U.S. President Obama and German Chancellor Angela Merkel will discuss democracy and responsibility at Berlin's Brandenburg Gate, moderated by Bishop Heinrich Bedford-Strohm, chairman of the Evangelical Church in Germany (EKD), an umbrella group of Protestant churches.

The "dieselgate" issue has been like an oil stain that the Kirchentag, a lay-organized event launched after the Second World War to explore the forms of Christian witness both within and beyond the churches, has not been able to remove.

The Kirchentag and its opposite number, the Roman Catholic "Katholikentag," have long had Volkswagen as a main sponsor. Having its vehicles on show there is so important for the carmaker that it has its own "church representative" dealing with religious communities.

When the scandal broke in 2015, the churches consulted with Volkswagen but decided to keep the relationship because the carmaker pledged to clean up the emissions scandal promptly.

But the scandal flared up again in Germany in February when a massive car callback to fix the emission problem backfired. Embarrassed company officials had to admit it was not that easy to retool the cars to bring their toxic exhaust down to legal levels.

"We counted on their promises to totally clear up this whole story," said Ellen Ueberschär, general secretary of the Kirchentag. "Of course, now we see that this is taking longer than expected and the whole problem is larger than we originally thought.

"What is just and sustainable work these days, how do we deal with raw materials — these have always been classic questions for the church and the Kirchentag, and they should remain so," she said.

"That makes it all the more important that we take these sponsors aside and make sure they clearly support these standards in word and deed," she explained.

Ueberschär said the Kirchentag was not against sponsoring, although certain companies — arms manufacturers or obvious polluters, for example — were excluded. "Our sponsoring contracts have the condition that companies respect the basic rules of the Kirchentag," she said.

In several interviews, she has also given pragmatic arguments for maintaining the sponsorship, for example that the Reformation anniversary program was already underway and that boycotting Volkswagen would also affect Christians who work for the carmaker.

Kaiser was not convinced. He said having vehicles with "Volkswagen" written on their sides meant "an enormous loss in credibility that is much greater than the profit it makes for using this fleet for free."

In a report, West German Radio (WDR) estimated the loan of free vehicles was worth several million euros.

Reinhard Benhöfer, environmental representative for the Lutheran Church in Hannover, also thought the Kirchentag's explanations weren't convincing. But he said churches had to raise funds and would inevitably have to make some kind of compromise.

"We're part of a society that is not clean at all — we're right in the middle of it," he said. Since all car companies seem to have cheated on emissions standards, he added, "at least for a certain period of time, we shouldn't take any gifts from them. Let's take a short break."

Kaiser said he got wide support from colleagues for the article he wrote in a Protestant magazine earlier this year pointing out the ethical challenge the sponsoring presented.

"There's a lot of resentment among them that the Kirchentag is so close to Volkswagen," he said. "The problem is not going away."