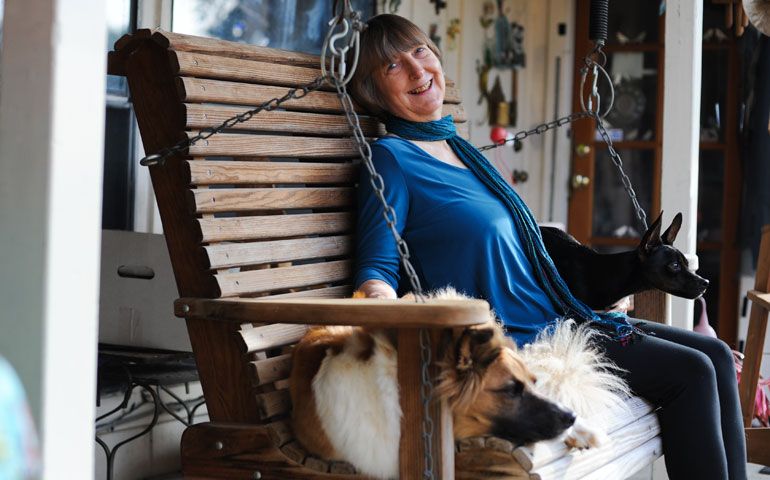 Carol J. Adams has changed the global conversation about food. She is an ecofeminist-vegan advocate, activist, independent scholar, author of numerous books and countless articles. Growing consciousness about food production and consumption as it relates to global warming has only increased interest in her work.

The 25th anniversary edition of her path-breaking The Sexual Politics of Meat: A Feminist-Vegetarian Critical Theory (1990) debuted recently as a Bloomsbury Revelations volume. The cover features a woman clad only in a hat with various cuts of meat written on her body. Just as women are objectified in advertising and social relations, so, too, are other animals.

The theory is erudite, but the message is clear: Animals and women have a lot in common. They are commodified and treated violently, often maimed or killed.

No one imagined this 25 years ago. Animals were animals; people were people. But now we know that we, too, are animals, and that some animals have feelings, high intelligence, and may even engage in rituals. Sadly, we also know lots more about violence.

One of Adams' key concepts is the "absent referent." For example, one says, "Let's have lunch," which can mean a sandwich, which is really a hamburger, which is meat, which is beef, which is the flesh of a cow who has been killed and cooked. The absent referent is Betsy, whose calves know the difference.

Likewise, a woman who is abused is called a "battered woman," a victim or survivor of domestic violence, sometimes Jane Doe, or even by her real name. But the absent referent is John Smith who beat her. Once on the lookout for absent referents, one finds just how useful this concept can be for unmasking power and making change.

Adams' work is a witness against violence. She adds another category, namely food consumption and speciesism, to the intersectionality that includes racism, sexism, classism, heterosexism and the like. Knives and forks, just like guns and spears, can be instruments of violence.

Some will scoff and accuse her of an advanced case of political correctness. But nothing binds climate change and economic inequality, animal rights and worker justice, racism and sexism together like food.

Even in her youth, Adams was amazingly creative. During her master of divinity studies at Yale Divinity School, she spent a year in Boston where she took classes from feminist philosopher Mary Daly. She led legendary feminist tours of Mount Auburn Cemetery, stopping at the grave of Mary Baker Eddy to read excerpts from Science and Health With Key to the Scriptures and at the grave of Fannie Farmer, where she handed out chocolates.

Aided by her near-photographic memory, Adams explored and expanded the contours of feminist history, always noting the meat eaters and the vegetarians.

Her work in rural ministry, setting up a hotline for women abused by men, concretized her theory. Killing women and killing animals is all killing. In meat-eating, she saw the ways in which women's bodies and the bodies of other animals are constructed, objectified and violated. She drew connections to racism, ecocide and war, always wondering why feminists embraced ecology early on but it is only now that some ecologists are embracing feminism.

Adams deepened her analysis in Neither Man nor Beast: Feminism and the Defense of Animals (1994) and The Pornography of Meat (2003).

Thousands of people have seen her "Sexual Politics of Meat Slideshow," which includes advertisements, menus, T-shirts, press clips, and more graphic examples of how women are animalized and animals are sexualized to their mutual detriment.

Her early interest in religion and her ministerial instincts show in The Inner Art of Vegetarianism: Spiritual Practices for Body and Soul (2000), helping readers see the links between what we eat and why we eat it. She has written prayers for animals and prayers for humans who lose their animals.

Her guides for dealing with children who stop eating meat (she encourages it), how to be a vegan living among meat eaters (she embodies it), and how to become vegan later in life (she promotes it) are well worth sharing.

Adams tweets regularly, has popular books on Jane Austen and Frankenstein to her credit, and is finishing a memoir about the caretaking of her elderly parents.

Two recent anthologies focused on Adams' work show her impact. Defiant Daughters: 21 Women on Art, Activism, Animals, and The Sexual Politics of Meat, edited by Kara Davis and Wendy Lee, is a collection of essays by women who credit Adams' work with shaping their lives in new and positive ways. The Art of the Animal: Fourteen Women Artists Explore The Sexual Politics of Meat, edited by Kathryn Eddy, L.A. Watson and Janell O'Rourke, is a powerful expansion of Adams' insights reflected in various media.

The global trend toward eating lower on the food chain, indeed veganism, is in part created by Adams' work. Her Sexual Politics of Meat book has been translated into Chinese, German, Japanese, Korean, Portuguese and Turkish; French and Spanish editions are scheduled shortly, while Italian and Serbian translations are in the works.

The power of her argument, the variety of her approaches -- as a marvelous cook she includes recipes and meal planning -- and her sustained analysis that grows exponentially with each insight into oppression add up to a signal contribution with religious implications.

Adams is currently writing on Christian ethical care for animals. She probes the role of animals in religion, their purpose in themselves and not as instrumentalized by humans. What if God were thought of not in human terms but in animal terms? She suggests that it would not be God the Father, Lord, Ruler, King, but God the brooding chicken under whose wings creation is protected. I daresay discussion will flourish and church potluck menus will change.

Pope Francis' call for "integral ecology," including animals, in his encyclical "Laudato Si', on Care for Our Common Home" missed the connection to women altogether. Perhaps someone will give him Bloomsbury's forthcoming The Carol J. Adams Reader: Essays and Conversations, 1995-2015 to bring him up to speed on the connections between women and animals.

I predict that 25 years from now, Adams' legacy will be a safer, healthier planet for all of us animals.

[Mary E. Hunt is a feminist theologian who is co-founder and co-director of the Women's Alliance for Theology, Ethics and Ritual (WATER) in Silver Spring, Md.]

Is the Catholic Worker a 'racist institution'?