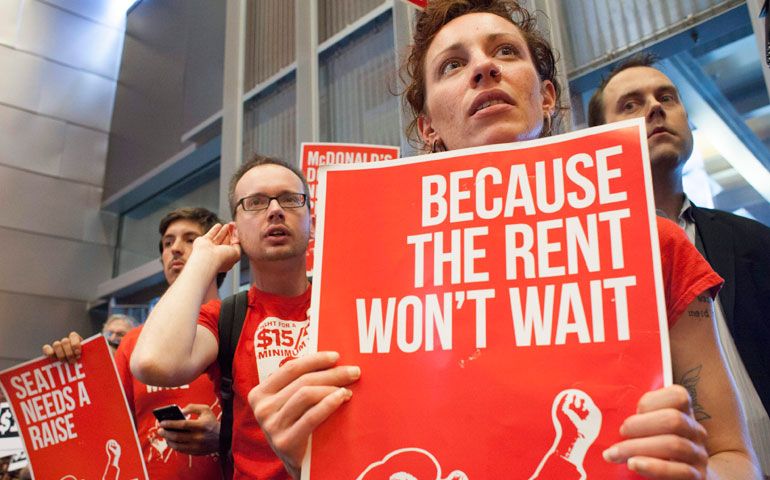 Labor activists hold signs during a Seattle City Council meeting in which the council voted on raising the minimum wage to $15 per hour on June 2, 2014. (CNS/Reuters/Davis Ryder)

CHARITY DETOX: WHAT CHARITY WOULD LOOK LIKE IF WE CARED ABOUT RESULTS
By Robert D. Lupton
Published by HarperOne, 208 pages, $24.99

In his book Charity Detox, Robert D. Lupton uses his years of experience working in inner-city Atlanta to convince churchgoers, businesspeople, and nonprofit professionals that most charity programs serving low-income individuals and communities in the United States actually hurt more than they help.

Why? Because most of our charities, he argues, are giveaway programs -- food pantries, shelters, used clothing closets and the like. According to Lupton, these kinds of giveaways create dependency. Good-paying jobs, and not handouts, are the key to overcoming poverty.

The central claim of Lupton's book -- that jobs are the key to lifting millions around the world and in the United States out of poverty -- provides an important perspective for people of faith to consider carefully. At a moment when inequality in our country is at its greatest since the 19th century, people of faith must lead the efforts to end poverty.

But while Lupton is right in affirming that good-paying jobs are essential to ending poverty in America, his argument explaining how these jobs should be created is flawed, and the picture he paints of who is and isn't working in this country is inaccurate.

However, another purpose of his book is to encourage nonprofit staff to think more like entrepreneurs. In doing so, he reminds them over and over again that, "CEOs and CFOs constantly monitor their success rate in relation to their bottom line."

His depiction of how business owners actually think in the real world is not at all consistent with how he thinks they should behave. Lupton encourages ethical business owners to raise wages, while at the same time argues that nonprofits should act more like corporations who are driven by short-term thinking and the bottom line.

This leaves the reader confused. On the one hand, Lupton says businesses should pay fair wages and provide benefits. On the other hand, he admonishes nonprofits to be more focused on outcomes and praises the values of the free-market economy. The conclusion the reader naturally reaches, then, is that most businesses will probably not be interested in voluntarily raising wages. If this is the reality, then one would expect Lupton to support raising the minimum wage. Unfortunately, he does not.

Instead, Lupton believes that in a free-market economy, where the vast majority of businesses and corporations consider profits first when making decisions, employers will voluntarily raise wages, and that there will be enough of them doing so that it will lift American families out of poverty.

This is misguided thinking. Working families need and deserve a raise in the minimum wage. In the United States, corporate profits are at a historic high, while wages remain at a historic low. Wages lag far behind the dramatic increase in productivity and profits over the last 20 years. Lupton is wrong to expect corporations and their CEOs to voluntarily raise wages.

This is the virtue of government regulation. It ended child labor, it keeps workers safe, and it can and should guarantee workers just wages. To expect the market to do this denies the very premise of a market economy, which Lupton accurately describes when he recommends nonprofits adopt corporate decision-making practices.

Moreover, Lupton leads his readers to believe that people living in poverty are poor simply because they aren't working, and that if we provide these families "handouts," they will be inclined to stop working. He argues that if someone could just help them learn how to find and keep a job, they could work themselves out of poverty.

But Lupton's recommendation does not match up with the reality of the working poor in America. According to the Economic Policy Institute, 63 percent of people living in poverty who are able to work (not disabled or elderly) are in fact working. At the same time, the National Low-Income Housing Coalition's most recent report, "Out of Reach," found that the average wage needed to rent a two-bedroom apartment in the United States is $19.35, while the federal minimum wage remains at $7.25. The reality is that people are working, but at a time when the cost of living continues to far outpace wages, American workers are falling further behind and into poverty.

Lupton argues that most programs serving families living in poverty create dependency and a disincentive to work. It is surprising that someone who has worked so closely with low-income families thinks they would prefer to receive handouts rather than earn living wages, and that they could somehow depend entirely upon those handouts, and thus not need to work.

Parents don't take their children to the soup kitchen for dinner because they are lazy; they do it because they are desperate. To say that the family that receives a meal now has to work in the food pantry in order to be fed, as Lupton recommends, may make it impossible for them to receive the essential food assistance they need. In all likelihood, both parents are working, but because wages are depressed, they simply don't earn enough to pay the rent and electricity, buy clothes for their children, fix the car, pay medical bills, and put a nutritious meal on the table.

Finally, what is most troubling about this book is the manner in which Lupton speaks about people living in poverty -- people he refers to simply as "the poor" over and over again. Lupton describes a single mother struggling to take care of her children as a "welfare mom." He portrays people who are homeless as grasping at anything they can get for free, regardless of whether or not they even need it.

He doubts the integrity of low-income individuals, asking, "How do we know that the recipient of our bus pass, for instance, is using it to get to a job interview?" He warns us against giving the poor too much because it will make them lazy: "Feed him four times, it becomes an entitlement."

And when Lupton describes gentrification, he argues that schools will improve because "the gentry gravitating into the city bring with them educational values that demand quality schools." Sadly, he writes as if low-income parents aren't interested in high-quality education for their children.

The way Lupton describes low-income families perpetuates stereotypes promoted by right-wing pundits and politicians who declare that people receiving government services are lazy and undeserving. This manner of speaking has led to real policy changes at both the state and the federal level that are hurting American families, such as deep cuts to health and human service programs.

This rhetoric is even more dangerous because it allows people to believe they already understand those who are different. There is no need for an encounter.

Not only does Lupton misunderstand the important role of government in ending poverty, his very language discourages what I think he really does want to encourage people to do -- to love our neighbors.

[Sarah E. Spengeman is the grassroots mobilization manager at NETWORK.]