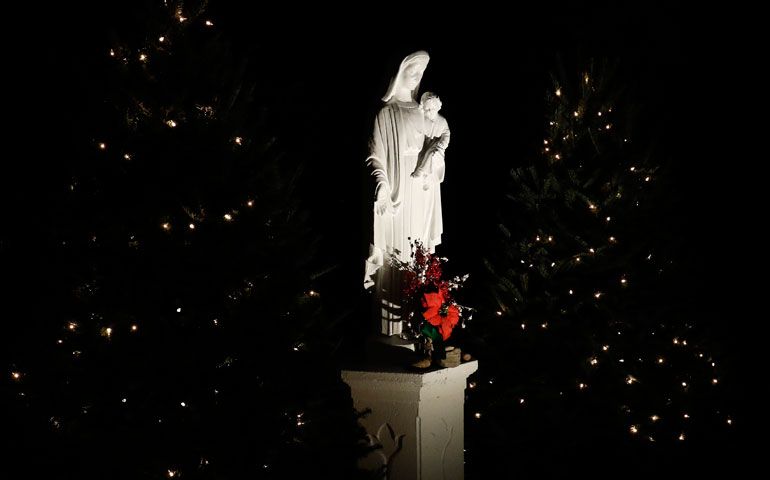 A statue of Mary holding the infant Jesus is seen Dec. 19, 2015, at the entrance of Immaculate Conception Seminary in Huntington, N.Y. (CNS/Gregory A. Shemitz)

THE VALIANT WOMAN: THE VIRGIN MARY IN NINETEENTH-CENTURY AMERICAN CULTURE
By Elizabeth Hayes Alvarez
Published by the University of North Carolina Press, 256 pages, $27.50

Let me begin by confessing that I was never much of a Virgin Mary girl. There was something about Mary’s sweetness and humility that didn’t do much for me. For years, I would have said that the name of my confirmation saint, Joan of Arc, tells you more about me than my baptismal name ever could.

Imagine my astonishment, then, when a remarkable new book made me wonder if I had written off the Virgin Mary a bit too quickly. That book is The Valiant Woman, Elizabeth Hayes Alvarez’s exploration of the Virgin in 19th-century American popular culture. In it, readers come to see that well before the contemporary women’s movement, images of Mary had a more complex and sometimes liberating impact than many of us might ever have imagined.

Figures of the Virgin attracted Protestant attention in part because they reinforced traditional female domestic roles. But other images of Mary, and sometimes the same images, also served to introduce new female roles. One such image was that of Mary as the queen of heaven, which, despite its origins in Catholic teaching and devotionalism, spilled over into popular images of women as the queen of the household. Queenship, even domestic queenship, can imply more female power than is initially apparent.

In The Valiant Woman, Hayes Alvarez draws on a wide range of historical contexts, literary sources, art criticism and theology. For example, part of the Virgin’s attraction for American Protestants was the pivotal role she played in European artwork, the knowledge of which demonstrated upward mobility. Some attempted to distinguish legitimate artistic portrayals of Mary from mere (Catholic) devotional art. But Hayes Alvarez uses the writing of the popular Protestant art historian Anna Jameson to show that the interconnections between the two were hard to avoid. Particularly in her extremely successful book Legends of the Madonna, Jameson used Catholic culture and thought as the necessary context of great Western religious art, even as she made knowledge of that art an indicator of rising-class status and Protestant morality.

Perhaps not surprisingly, Jameson’s interpretations of Marian art also connect seemingly incompatible gender roles for women. For example, according to Jameson’s standards, maternity is an essential characteristic of paintings of the Virgin, yet she rejects any association of that maternity with female subordination. As Hayes Alvarez observes, during this period, Jameson and other writers, Protestant as well as Catholic, “drew on Marian models of womanhood to endorse female domesticity,” and resist shifts in gender norms. But they also used Mary -- her suprahumanity, her queenship, her motherhood of God -- to “expand female power within and beyond the domestic sphere.”

In her epilogue, Hayes Alvarez fast-forwards The Valiant Woman to the semicentennial of the definition of the dogma of the Immaculate Conception in 1904. Even then, some U.S. Protestants condemned the Roman Catholic church as “the church of the Virgin Mary,” the worship of whom overshadowed the worship of Christ. And some Protestants still used the Virgin Mary as a symbol of sentimentalized womanhood. But by and large, there was much less Protestant interest in the Virgin Mary than there had been during the previous 50 years.

This was the case, in part, because Catholics were not as much of a threat as they had they had been, so Catholic symbols were less a focus of attention. But it was also the case that the “entrenchment of the market economy” made separate spheres for women and men less necessary, and because of the successes of the women’s movement, feminists no longer needed to couch arguments for or against women’s freedom in traditional religious symbols.

The close readings of 19th-century American fiction, journalism, and art criticism on which Hayes Alvarez draws may be challenging for some readers. But the required attention pays off. Just the opening chapter, exploring the conflicts and conversations related to the proclamation of the dogma of the Immaculate Conception in 1854 and 1855, is worth the price of admission. And if you’re anything like me, the remaining chapters will radically transform whatever childhood notions you retain about that sweet, humble, obedient Virgin.

[Marian Ronan is research professor of Catholic studies at New York Theological Seminary. The Apocryphile Press will publish her co-authored book Women of Vision: Sixteen Founders of the International Grail Movement in 2017.]

An author's peacekeeping journey during the Iraq War

'Pelosi' biography chronicles wins and losses, not her inner workings