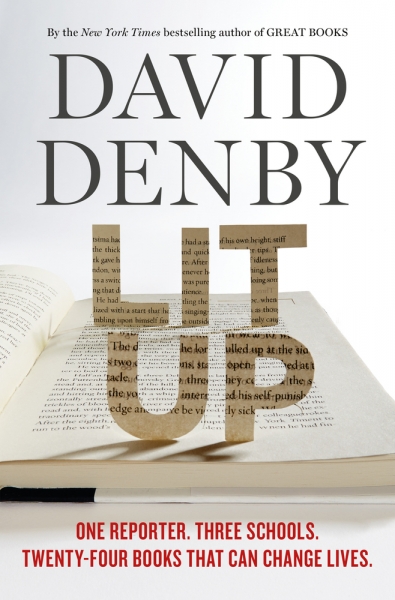 LIT UP: ONE REPORTER, THREE SCHOOLS, TWENTY-FOUR BOOKS THAT CAN CHANGE LIVES
By David Denby
Published by Henry Holt, 288 pages, $30

One of the worst moments for the college English teacher getting to know his students in the first days of the semester is the encounter with a student who has never read a book. Yes, he has survived grammar school and high school and been accepted by the college, but either the young man's schools have been highly irresponsible or he is a master faker, bluffing his way through courses on SparkNotes and mouthing what he's heard secondhand. Probably both.

Tragically, that student is not alone. In my travels with the editors of Conversations on Jesuit Higher Education, I've asked groups of college students what they have read, and they struggle to name a book or author who has had an impact. It's as if the digital social media monster -- the TV-cellphone-Facebook-computer combo -- has swallowed their brains.

In 1991, David Denby, former film critic for The New Yorker, returned to Columbia University to master for the second time its famous course on history's literary masterpieces -- from Homer to Augustine to Woolf -- and in 1996 shared the experience in The Great Books. Recently, he descended upon three very different New York and Connecticut high schools. For a year, he sat in on three remarkable teachers who coached, battered, exhorted and inspired their sophomores not only to read Hawthorne, Shakespeare and Fitzgerald, but to talk about them with excitement. Reading changed their minds about what is important in life.

Denby focuses on Beacon, in New York City; Mamaroneck, in wealthy Westchester County, N.Y.; and Hillhouse, in New Haven, Conn., each with its own strategy for a common goal: transform distracted, self-centered, sometimes antagonistic 15-year-olds into not just "readers," but teenaged intellectuals confronting contemporary violence and social decay with moral eyes and hearts.

Beacon's enrollment was 52 percent white, 24 percent Hispanic, 16 percent African-American, and 5 percent Asian. Having taught both William Faulkner's A Rose for Emily and Nathaniel Hawthorne's The Minister's Black Veil, I was seized in my curiosity: How would Manhattan adolescents absorb one story of a woman who has slept with the corpse of her lover for years, and another where a 1730s New England preacher, without explanation, hides his face from his congregation until he forces those gathered at his death bed to confront the evil their own "veils" hide?

Confronted with Sylvia Plath's poetry and suicide, the students read her poems aloud. Their teacher, Sean Leon, ex-Catholic son of an Irish Catholic family, is forcing the students to reveal themselves, both anonymously and in fierce discussion, and to bind themselves together in trust.

Whereas Beacon students had to compete to get in, Mamaroneck, in a wealthy country club suburb, accepts everybody. But it had one big problem. Students didn't like to read; about 20 percent of them read the literature assigned.

Mamaroneck's response was to let students choose their own books. Let them read pop stuff to break their resistance, then gradually lead them to real literature. Some got caught up in reading competitions, and by the end of the year were reading on two levels -- Shakespeare as a core text and Laura Hillenbrand's Unbroken for fun.

The toughest challenge was Hillhouse, rated as the worst-performing high school in New Haven and one of the worst in the state of Connecticut. Seventy-six percent of the students were African-American, 20 percent Hispanic and 2 percent white.

Jessica Zelenski was convinced they needed literature. With missionary zeal, she told herself, "Maybe they will enjoy life more if I can get them reading."

Poverty was responsible for the knowledge gap. Students lived in large chaotic families where fathers and stepfathers and mothers' boyfriends were coming and going. Some had fathers or brothers in prison. The New Haven School District declined to hire a pre-college adviser. Seventy percent would leave four-year colleges by the end of sophomore year.

Nevertheless, Zelenski was convinced these 14-year-olds needed literature to live. The class loved Ernest Hemingway's The Short Happy Life of Francis Macomber, so she had them write short papers in the voice of characters in the story and then read their essays aloud in discussion. They formed groups and read both alone and together, "the lines of sympathy going out to one another, enfolding the characters and dilemmas they read about."

By the end of the year, "they had learned to master one of literature's gifts, the ability to get out of themselves and enter into other people's lives."

In the final semester, Denby returned to Beacon and to Leon pushing his students into adulthood with Fyodor Dostoevsky's bleak and demanding Notes from the Underground. By now, the students have been conditioned to burst out with their deepest feelings, to spill their secrets. One girl blurts, "I hate this school. I tried to kill myself."

Perhaps like any teacher reading Lit Up, I found myself wishing Catcher in the Rye, A Separate Peace and All Quiet on the Western Front were in the syllabus, but I remained in awe of Denby and his struggling teachers.

Denby gives us a book that every teacher who cares about -- loves -- his or her pupils must read. It is a classic tribute to those who have declared war on student laziness, evasiveness and ignorance, who are building and saving souls. Teachers who will pull them back from the TV screens, social networking and other obsessions of teenage life and lead them into an adult world of literature and love.

[Jesuit Fr. Raymond A. Schroth, literary editor of America, has taught at one high school and seven universities.]

Catholic educators wonder how to restart the next school year