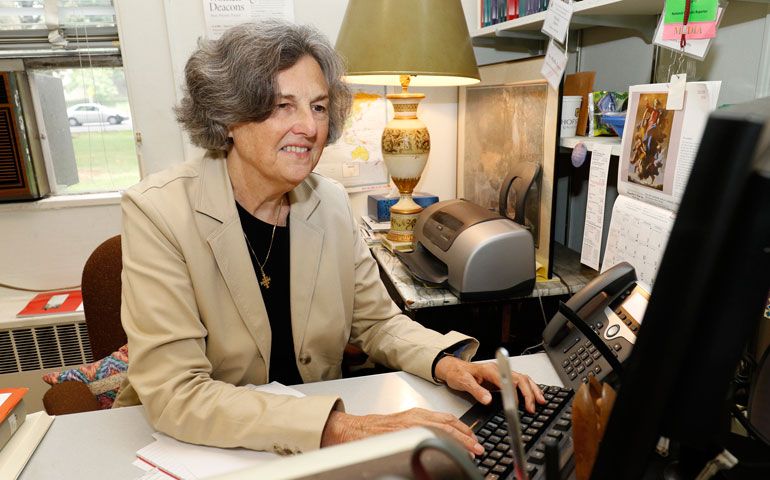 Phyllis Zagano is seen in her office Aug. 2. (CNS/Gregory A. Shemitz)
This article appears in the Women deacons feature series. View the full series.

Thanks to the recently constituted Study Commission on the Women's Diaconate, the topic of women deacons is receiving renewed attention and interest. Women Deacons?: Essays with Answers clearly shows, however, that the question is not new. In recent decades, some of the leading historians and theologians in the world have explored the history of women deacons in-depth. Of the 10 scholars represented in this collection, three are original members of the International Theological Commission: Yves Congar, Philippe Delhaye and Cipriano Vagaggini.

Today, the most notable contributor to Women Deacons? is its editor, Phyllis Zagano. A columnist for NCR and researcher at Hofstra University, Zagano is the leading scholar and most prolific writer in the world on women deacons. And she is also the only woman from the Western Hemisphere named to the 12-member papal commission.

Remarkably (and I'd say providentially), these essays were published just two weeks before the female leaders of the International Union of Superiors General requested the commission and Pope Francis agreed to establish it.

Related: "Francis to create commission to study female deacons in Catholic church" (May 12, 2016)

The 12 essays were originally written and published between 1969 and 2011, but several now appear in English for the first time. They tackle the major questions that the commission will surely examine: When and where did women deacons exercise their ministry, in what ministries did they serve, and what was the nature of their ordination?

The authors analyze the numerous historical references to women deacons in epigraphs, letters, chronicles, pastoral manuals, legislative texts, the writings of bishops and popes, and even ancient ordination rites. A few of the essays (notably those by Congar, Delhaye, Corrado Marucci and Peter Hünermann) also look to the future and explore the possibility of women again serving as deacons.

A consensus exists among these authors that women were sacramentally ordained as deacons and could be today, but that does not mean the reader is exposed to only one viewpoint. The research and analysis in these essays is meticulous, nuanced and fair. The authors not only highlight the strong evidence in support of their position, but also address the complexity and contradictions within the historical record.

One of the finest essays in this regard is by Marucci, an Italian Jesuit. A professor of biblical exegesis at the Pontifical Oriental Institute in Rome, Marucci synthesizes the major historical studies on women deacons and convincingly argues that it is "highly probable" that women deacons received a sacramental ordination. It is a precious resource made available in English for the first time.

Marucci explains that in some places women deacons are counted among the clergy. In other places, they are not. The Council of Nicaea (A.D. 325) appears to reject their ordination but the Council of Chalcedon (451) recognizes it. The Apostolic Constitutions (circa 380) emphasize that women deacons do not exercise the same liturgical roles as presbyters and bishops, but they are ordained by the bishop with the laying on of hands.

An eighth-century Byzantine ordination rite is substantially analogous for male and female deacons, yet small differences exist. In 1736, a Maronite Catholic synod approved by the pope granted bishops the authority to ordain women as deacons, but the synod did not specify the nature of these ordinations.

These essays enable the reader to sort through the evidence and form conclusions about both the past and the future.

One consistent point running through the collection is the strong distinction between the diaconate and priesthood. None of the contributors, by my reading, even implicitly suggest that the presbyterate should be open to women.

Delhaye argues that women have always fulfilled diaconal-type ministries in the church but never governance or liturgical leadership. Congar writes that he has "taken a stand against the feminine priesthood" but "would not have the same objections for the diaconate."

The precise nature of the relationship between the diaconate and the priesthood arouses hopes and fears among Catholics, and the commission will certainly debate the question.

This book is timely and essential reading for anyone interested in the topic and the commission's work. Readers will find some essays more accessible and engaging than others. I suggest starting with Marucci and Hünermann, who provide broad overviews of the issues at stake. Other essays offer more detailed examinations of the sources and are more suited to scholars in the field.

For a lay reader like myself, I would have found it helpful to have explanatory footnotes or a substantial epilogue by the editor to address a few instances when the authors seem to disagree in their interpretation of the sources. But now I have an impetus to do more reading and engage in further conversation on the topic.

Some of these essays, Zagano notes, were dismissed in a footnote when the International Theological Commission studied the diaconate and issued a document in 2002. Only 2,600 words of that 42,000-word document examined the ministry of women deacons.

The new commission has an opportunity to study this particular question in greater depth and breadth, including the scholarship in this book, and Zagano is sure to see it through.

[Jesuit Luke Hansen, a former associate editor of America, is a student at the Jesuit School of Theology of Santa Clara University, Berkeley, Calif.]