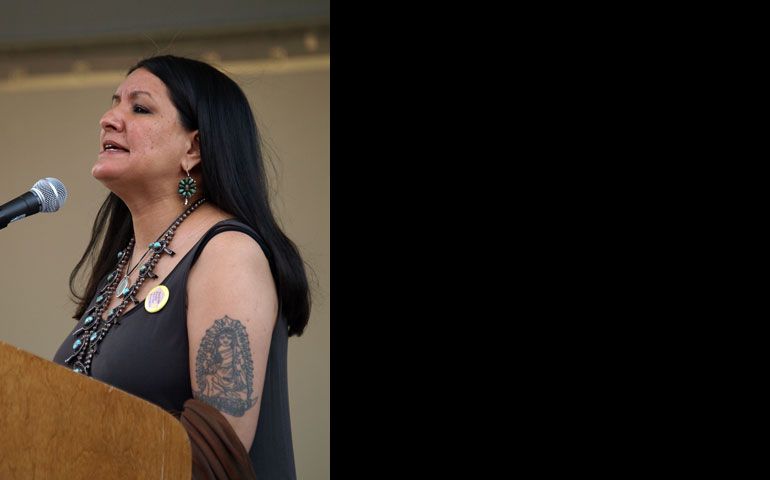 Sandra Cisneros offers a reading from a current work during the 25th anniversary of her book The House on Mango Street in San Antonio in 2009. (Newscom/ZUMA Press/Robert Mcleroy)

A HOUSE OF MY OWN: STORIES FROM MY LIFE
By Sandra Cisneros
Published by Knopf, $28.95

Her first novel, The House on Mango Street, with its rhythmic and evocative blend of prose and poetry, put Sandra Cisneros on track as an award-winning writer known for her ability to give voice to the Latina-American experience. Ironically, the streetwise voice in which Cisneros wrote Mango Street is not her own but that of her mother.

That revelation is one of several included in this collection of travel articles, appreciations, academic talks, and introductions to books. Written from 1984 to 2014, the articles offer often-compelling perspectives on people, places and ideas that Cisneros has encountered. They also offer insight into her personal and professional life.

Cisneros writes about growing up in Chicago, studying at the University of Iowa, being inspired by famous writers (Pablo Neruda, Jorge Borges and Vladimir Nabokov), finding a publisher, setting out on her own (despite having an overprotective father), working with a Jungian therapist, coping with severe depression, learning about her father's illegitimate daughter, and traveling to various countries where she hoped to establish herself as a writer.

She also updates each article, often adding a correction or fine-tuning an earlier observation.

A middle child in a family of seven children -- six boys and one girl -- Cisneros (born 1954) says her teachers at St. Callistus Elementary School were cruel. She believes that she lost her spirituality in the Catholic school system.

But the good news is that she seems to have found it again. If there's one thread that pulls together the 45 pieces included in Cisneros' latest, it's a sense of otherness, of God being much larger than any religious denomination.

Several of the essays concern her belief in divine providence, and her roots in Mexico with its cultural and religious customs -- especially its devotion to the Virgin of Guadalupe. While Cisneros researched one of her stories about the Virgin, she was inspired to return to the Roman Catholic church, which she had left several years earlier.

Cisneros doesn't say exactly why she left or when, although she hints at her conversion with comments like this: "She [the Virgin] is a face for a god without a face, una indegéna for a god without ethnicity, a female deity for a god who is genderless, but I also understand that for her to approach me, for me to finally open the door and accept her, she had to be a woman like me."

She was closer to her father than to her mother. He grew up in Mexico in an upper-middle-class family. Given to wandering, her father came to the U.S., then to Chicago where he met her mother, a brilliant and beautiful woman of Mexican descent. She was never educated and never very happy. Cisneros has memories of her mother sitting by the window feeling trapped.

Other essays describe Cisneros' feelings about her parents' deaths. When her mother died, Cisneros says she almost didn't notice "the hovering emotion that moved about the room like moonlight shimmering on water. It was gentle and tender and sweet. ... It cracked my heart to think that this pure love was my mother all along, underneath all that bravado."

Cisneros' flair for details brings these essays alive. Her mother's house smells like fried tortillas. Her brother's hair has an Alberto VO5 scent. Her father who, when he learns that she (his only daughter) plans to move out of the family home, stands in silence then looks at her with the eye of a rooster ready to strike.

If readers want to learn how Cisneros succeeded as a writer, they won't find it here. Interestingly, though, she says she believes her deceased parents help her with the tasks of her daily life, even with her creative work. "When you lose a loved one," she writes, "you have a spirit ally on the other side."

This may sound like New Age stuff, she adds. But it isn't. "It's old age ... and filled with such wisdom that we have had to relearn it because our miseducation has taught us to name it 'superstition.' "

Her words take on added resonance when one considers that Cisneros was shy growing up. She did not participate in class discussions even in graduate school at the Iowa Writers' Workshop, where she felt like a misfit, being a woman of color and coming from a poor Hispanic family.

Then she became angry and rebelled against the Iowa program with its upper-middle-class perceptions. She decided she didn't want to write like her classmates. She would blend poetry and prose. She would find her own voice.

Light of the nations