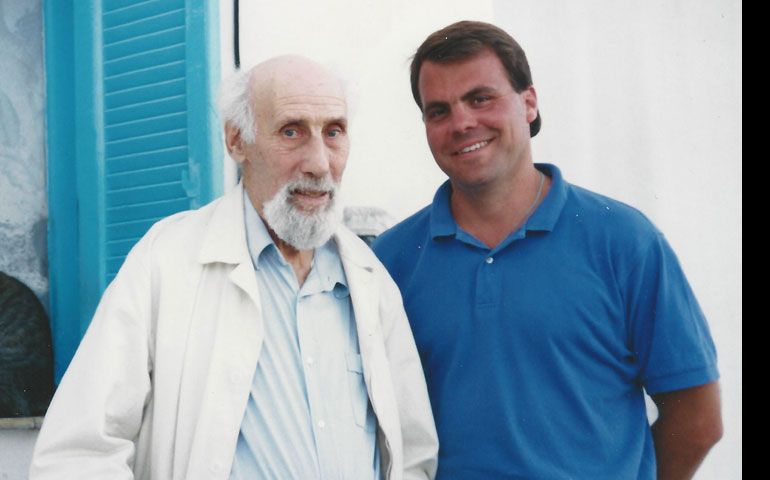 Robert Lax, left, with Michael McGregor outside of Lax’s house on the Greek island of Pasmos in 1992 (Sylvia McGregor)

Robert Lax is best-known in Catholic circles as a friend of Thomas Merton, whom he met when they were both students at Columbia University in the 1930s. These friends shared literary and religious interests and both were converts to Catholicism, Lax from Judaism. Their friendship was principally epistolary and lasted until Merton's death in 1968. Lax lived on until 2000 and became a major commentator and resource on Merton's life.

Pure Act, a first biography of Lax, places him front and center.

Michael McGregor, professor of English and creative writing at Portland State University, visited Lax in Europe and carried on an extensive correspondence with him for 15 years. In this appreciative biography, he provokes the reader to ask: Who was Robert Lax?

By craft, Lax was an experimental poet, one allied with the "concrete" poets. He was a friend of Jack Kerouac and publisher James Laughlin; a writer who did stints with The New Yorker and Jubilee magazine; and a teacher at several colleges.

Tall and gaunt, Lax appeared prophet-like, but as Merton said, he had no rage in him or any desire to lead anyone other than himself. Although he loved solitude, he was not a hermit or recluse. He fully enjoyed the company of others and sought it out.

His life was Spartan-like, but he was no ascetic. He was more sage than mystic, and did not qualify as a saint as traditionally defined, even though early on he told Merton that he should aspire to be one. Lax himself did not seek sanctity. In fact, later in life he revised his notion of this vocation, writing, "What I'd mean by it now is be, hope to be, hope to get to be, the person you were created to be."

As a good biographer, McGregor does not directly answer the question, who is Robert Lax? But the evidence lines up: Above all, Lax was a seeker after the authentic human life. At times, he thought he had found people who lived authentically and he wanted to be among them. In France, he lived with the Cristianis, a family of acrobats and circus performers, and, for many years, he lived in communities of fishermen and sponge divers on the Greek islands of Kalymnos and Patmos.

In his attempts to live authentically, to be the person he was created to be, Lax spent much of his life stripping away all that was inessential. He ate little, possessed almost nothing, and lived in the sparest accommodations.

His poetry, some of which is included in Pure Act, illustrates how his work mirrors his life purpose to strip away the inessential. His experimental poems use repetition of syllables and words and are written in short vertical lines strung down the page. What is left is most white space.

What Lax wanted was to live a life that was harmonious, peaceful, loving and present to others. At times, his naiveté or romanticizing of island life almost does him in, but he always manages to survive, find money, and keep in touch with myriad friends.

Above all, his clear desire is to be fully and uniquely himself. Lax writes: "We are all meant to shine, as children do. We were born to make manifest the glory of God that is within us. It's not just in some of us; it's in everyone. And as we let our own light shine, we unconsciously give other people permission to do the same."

Lax was inspired by Thomas Aquinas' notion that God is "pure act" and all else is potential oriented toward God. It was by stripping all that was inessential from life that one discovered the authentic God and in the process the authentic self.

Pure Act is an admiring biography, one that is well-researched and written with affection. McGregor offers little critique of Lax's life, however, and readers will differ as to whether the author's injection of his own voice in the text adds to or distracts from his subject's life story.

While Lax's strange life -- McGregor calls it an "uncommon" life -- will not cause readers to emulate it, it will provoke them to ponder what it is to be fully human. This is, of course, one of the principal functions of biography, needed now more than ever.

[Dana Greene is dean emerita of Oxford College of Emory University. Her latest book is Denise Levertov: A Poet's Life.]

Share your story for 'People's State of the Union'