The 'origin myth' of Christian America 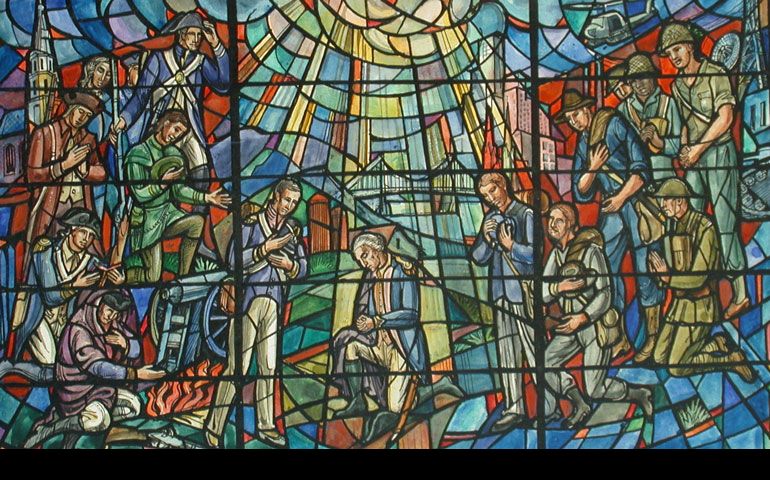 George Washington kneels in prayer at the center of a 20th-century design drawing for a stained glass window, from the archives of U.S. company J&R Lamb Studios. (Library of Congress Prints and Photographs Division)

INVENTING A CHRISTIAN AMERICA: THE MYTH OF THE RELIGIOUS FOUNDING
By Steven K. Green
Published by Oxford University Press, $29.95

Did the Founding Fathers establish the United States as a Christian nation? The answer has profound consequences today. For if the founders intended this nation to be Christian, then any public policy, cultural development or social initiative that erodes that original intent challenges the fundamental core of our national being.

But if the founders created a nation that privileged no religion, then claims that our public institutions must reinforce Christian values derive from more contemporary preferences and deserve no special stature.

Christian nationalists, a movement of conservative, primarily evangelical Protestant Christians that has gained a significant foothold in the American cultural and political landscape, argue that the founders certainly did intend to establish a Christian nation. They see a pernicious denial of this "origin narrative" permeating all aspects of contemporary culture, and worry especially about the rise and seeming acceptance of a variety of religious expressions in American public life.

Steven Green argues convincingly in his new book, Inventing a Christian America, that the "origin myth" of a Christian founding did not begin with the founding generation, but decades later, and that today's Christian nationalists promote an erroneous reading of our past that distorts even that 19th-century version of our beginnings.

Catholics might take solace in this conclusion, as those who advocated for a "Christian" nation in the 1770s most decidedly excluded Catholics from their version of Christianity, and it is not clear that today's advocates would welcome the church of Pope Francis either.

Green's argument is nuanced and complex, and he has broken it down into five central questions that he sees shaping today's debate. He explores each at great length and reaches persuasive answers.

Did the earliest English colonists come to America to establish religious liberty? No. The original English colonists were mostly Protestant, and some came to escape constraints placed on their own religious freedom. But rather than extend that opportunity to others, they zealously prohibited from practicing freely all Catholics, Jews, Quakers and many Protestants who dissented from the prevailing Church of England in the south and Puritans in New England.

And many did not come to America for religious reasons at all, but for economic opportunities.

The founders saw the dangers of this legacy of religious intolerance and therefore formed a nation that rejected a Christian establishment. Moreover, they moved beyond mere "tolerance" of multiple religions in favor of "religious liberty," and asserted freedom of conscience to be a natural right.

Did the revolutionary generation base their "compact" between the people and their government on the Puritan's "covenant" with God? No. The founders looked to secular political compact theory for their inspiration, the same theory in fact that inspired the Puritans to develop their religiously infused covenant. Those looking for a purely American origin myth invented a path from the Mayflower Compact to the U.S. Constitution, but the founders never walked down it.

Were the founders deeply Christian men who manifested their faith in the structure and purpose of the new nation? No. They were Christians, but mostly Enlightenment Christians who believed that religion could cultivate the good morals necessary for popular government. They established a government that had no business promoting religion, nor privileging Protestant Christianity.

If the founders did not establish a Christian nation, why did this myth emerge and why do so many find it so compelling today?

Green traces its first appearance to the second generation of Americans, those children of the founders who wanted to both explain America's great fortunes and further affirm the nation's stature by providing providential justification.

But even this invention bore little resemblance to the 20th-century Christian myth so fully explored in Kevin Kruse's recent book One Nation Under God. The latter genesis story promotes a more sectarian, evangelical version of America's founding that even early 19th-century authors of the first "Christian" origin myth would find unrecognizable. Green establishes convincingly that we need accord it no deference.

This is good news for Catholics. Eighteenth-century promoters of Christian privilege sought consistently to establish a "Christian" America that both excluded Catholicism and denied Catholics their civil rights. They wanted to prevent Catholics from holding public office and even bar them from voting.

The actual founders, those who established the new nation, deliberately chose a different path. Though many may have shared the 18th-century anti-Catholic prejudice that animated so many Christian nationalists, the founders worried even more about privileging Protestant Christianity.

We might usefully heed their concerns today as Christian nationalists rise to power within the Republican Party and in the ranks of the American judiciary. Their version of a Christian America is really a conservative, Protestant, evangelical nation that eschews much of what Catholics hold dear -- especially Catholic social teaching.

Though that Christian nation would not likely challenge Catholic, Jewish and Quaker civil rights, Muslim Americans could not be so sanguine. This points to the founders' wisdom in establishing a nation free of religious privilege, and to the value of Green's reminder that it was so.

Welcome to the cafeteria, Ross

A historian looks at the renewal, and the jolt, Vatican II brought