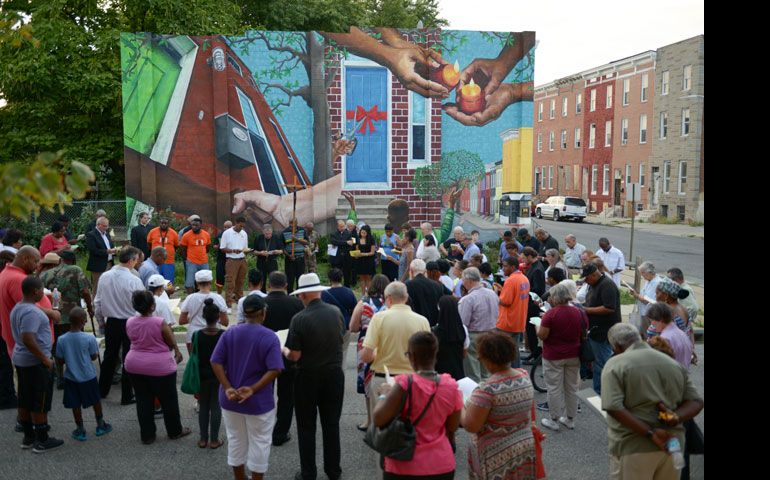 Pax Christi International and the Pontifical Council for Justice and Peace hosted a gathering of scholars and activists in April in Rome to explore the place of nonviolence and just peace in the Catholic church. As a result, the participants issued "An Appeal to the Catholic Church to Recommit to the Centrality of Gospel Nonviolence" (NCR, May 6-19).

The gathering also expressed hope that Pope Francis would issue an encyclical devoted to the topic, and NCR, in an editorial (Aug. 26-Sept. 8 issue), seconded that suggestion while also calling for a Synod of Bishops that will be dedicated to just peace.

Evidence of the traction that the Rome gathering's appeal has gotten can already be found in the title of Francis' message for the 50th World Day of Peace: "Non-Violence: A Style of Politics for Peace." Pope Paul VI, inspired by the encyclical Pacem in Terris ("Peace on Earth") from Pope John XXIII, introduced the annual practice in 1967 and gave the first World Day of Peace Message on Jan. 1, 1968. This will be Francis' fourth such message.

After two decades of teaching Catholic social thought and the ethics of war and peace, I have found that most students appreciate the following reading list of books on nonviolence and just peace.

First, I think it is important to make it clear that nonviolence is not new. An excellent anthology containing excerpts from primary sources throughout the last 2,000 years is Christian Peace and Nonviolence: A Documentary History, edited by Michael G. Long (Orbis, 2011). It has the usual suspects, such as Tertullian and Origen from early Christianity; Francis of Assisi and Peter Chelcicky from the medieval period; Erasmus and Menno Simons in late Scholasticism and the Reformation period; William Penn and Leo Tolstoy in the modern period; and Dorothy Day, Martin Luther King Jr. and the Berrigan brothers in the 20th century.

But it also includes so many unremembered or unexpected voices, such as Pelagius, Alexander Campbell, Dwight L. Moody, Clarence Darrow, Georgia Harkness, William Stringfellow, Eileen Egan and Dorothee Soelle. In short, this is the go-to book for snippets on nonviolence and peace by a vast array of thinkers and activists (and thinking activists and active thinkers), including some of our contemporaries, like John Dear, Jim Forest, Robert Johansen, Andy Alexis-Baker and Tracy Wenger Sadd.

There are also two books by University of Notre Dame peace scholar David Cortright that I highly recommend. The first, Peace: A History of Movements and Ideas (Cambridge University Press, 2008), provides an accessible and detailed account of the peace societies in the 19th century and subsequent movements (disarmament, banning the bomb, protesting Vietnam and Iraq wars) and themes (democracy, social justice, responsibility to protect, realistic pacifism).

His earlier Gandhi and Beyond: Nonviolence for an Age of Terrorism (Paradigm Publishers, 2006) offers an informed account of the influences on and impact of Gandhi, as well as considers King and Day, along with lessons learned and principles for action in our world of terror and terrorism.

Any possible encyclical on nonviolence and just peace need not start from scratch. Catholics worldwide, from Colombia to South Africa to the Philippines and Indonesia, have been practicing and learning ways to prevent and transform conflicts. Peacebuilding: Catholic Theology, Ethics, and Praxis, edited by Robert J. Schreiter, R. Scott Appleby, and Gerard F. Powers (Orbis, 2010), consists of insightful essays from Catholic theologians, scholar-practitioners, and ethicists who spent time on site, rather than in a so-called ivory tower, and with grassroots peacebuilders.

The volume is the product of a four-year project sponsored by the Catholic Peacebuilding Network based at the Kroc Institute for International Peace Studies at the University of Notre Dame. It is an indispensable resource for anyone seeking to become aware of what's already happening with many Catholics and organizations with regard to peacebuilding, and also perhaps a place to find ideas about how and where to become involved, wherever readers may be.

Another collection, edited by Tripp York and Justin Bronson Barringer, that I've used effectively is A Faith Not Worth Fighting For: Addressing Commonly Asked Questions About Christian Nonviolence (Cascade Books, 2012). These essays by Protestant pastors, activists, and academicians (some Catholics, too) address the oft-heard questions that are posed to Christians who refuse to kill, such as: What about Hitler? Must Christian pacifists reject police force? What would you do if someone were attacking a loved one? What about the centurion? And so much more -- an excellent resource.

The phrase "just peace" echoes a project launched by the late Baptist ethicist Glen H. Stassen (1936-2014), resulting in a book that has appeared now in three editions, the most recent of which is Just Peacemaking: The New Paradigm for the Ethics of Peace and War (Pilgrim Press, 2008). Seen as an alternative to either pacifism or just war, just peacemaking includes 10 practices -- rather than principles or criteria -- that are ethically normative, empirically observable, and demonstrably effective for preventing wars:

This just peacemaking approach has been lifted up in recent years by the World Council of Churches, and it is now an expected and welcome component in most scholarly discussions of the ethics of war and peace today.

In addition, attention has been given to just peacemaking in the other two Abrahamic religions, Judaism and Islam, in a subsequent volume, Interfaith Just Peacemaking: Jewish, Christian, and Muslim Perspectives on the New Paradigm of Peace and War (Palgrave Macmillan, 2012), edited by Susan Brooks Thistlethwaite.

Eli S. McCarthy, who has written in NCR on just peace, has authored Becoming Nonviolent Peacemakers: A Virtue Ethic for Catholic Social Teaching and U.S. Policy (Pickwick Publications, 2012), which explores and recommends practices that correlate with the nonviolent peacemaking of Jesus, Gandhi, Ghaffar Khan, and King. It also engages with human rights discourse in the hopes of influencing U.S. policy.

For a helpful book on why the abolition of war is actually realistic for Catholics to advocate, see David Carroll Cochran's Catholic Realism and the Abolition of War (Orbis, 2014). Just as the duel, slavery, and lynching have been abolished, so, too, can war.

Of course, there are modern forms of slavery and lynching that still occur, but these are criminal activities. Someday, so, too, might some country or group break the future law abolishing war, which would require perhaps some form of force -- say, just policing -- to enforce that law. Cochran draws on recent work on that topic, too, including Just Policing, Not War: An Alternative Response to World Violence (Liturgical Press, 2007), edited by Gerald W. Schlabach and containing essays by peace scholars such as John Paul Lederach and theologians like Margaret Pfeil and Stassen.

Following Francis' lead in his encyclical "Laudato Si', on Care for Our Common Home," I would add two wonderful books that connect nonviolence and peacemaking with how we treat the rest of creation: Fred Bahnson and Norman Wirzba's Making Peace With the Land: God's Call to Reconcile with Creation (IVP Books, 2012) and York and Alexis-Baker's edited collection, A Faith Embracing All Creatures: Addressing Commonly Asked Questions about Christian Care for Animals (Cascade Books, 2012).

An evangelical case for LGBT acceptance