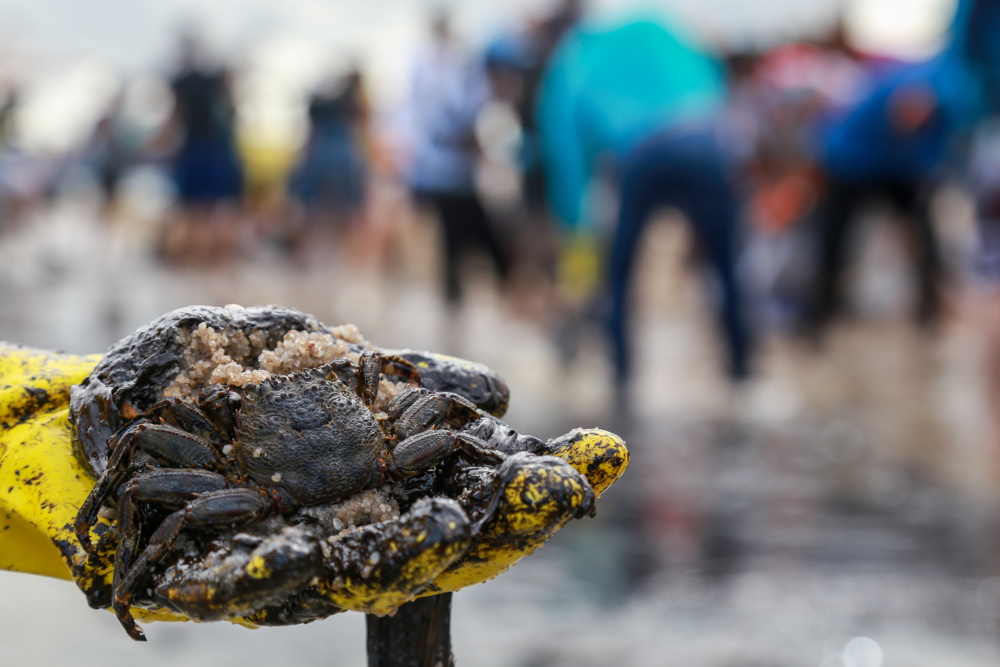 A man in Cabo de Santo Agostinnho, Brazil, shows a crab covered in oil Oct. 20, as he and others work to clean the site of an oil spill. Proposals made by small groups at the Synod of Bishops for the Amazon involve the Catholic Church's role in helping indigenous communities confront issues such as ecology, violence and migration. (CNS/Reuters/Diego Nigro)

The Amazon synod is calling for courage and solidarity from all levels of the church in the fight to protect vital natural resources for the planet and defend indigenous ways of life, said one of its lay observers.

Josianne Gauthier, secretary general of CIDSE, the network of 18 Catholic social justice organizations, said that throughout the synod's three weeks a "great need" has been articulated for the church to do more to denounce destructive industrial development projects in the world's largest rain forest.

For decades, CIDSE has worked in all nine countries comprising the Amazon. In that time, its members have stood alongside local communities and witnessed the impacts of logging and mining on both their ancestral lands and their rights. Gauthier said there has long been involvement from the grassroots church, with some missionaries and church workers murdered for their defense of human rights. But the situation now requires a greater role from the church's highest echelons.

"There's a great amount of courage at the local level," she said. "I think the question is, can we raise that courage higher up at a global responsibility? Can the church stand in solidarity with these communities?"

The native Canadian said the church can do that by dialoguing directly with political bodies on behalf of indigenous groups, and to ask that they put in place regulations that stop illegal activities and land-grabbing and encourage economic models that support sustainable growth.

Gauthier is among special guests invited to the synod, which is set to conclude on Oct. 27. She praised the three-week process for placing the church's spotlight on the many relevant issues pervasive in the Amazon region.

Along with the threats posed to indigenous rights and cultures, deliberations at the synod have also examined how unrestrained deforestation and extractive practices endanger the planet itself, particularly in disrupting a biome critical to addressing climate change. Along with it, synod participants have discussed the possibility of married priests and other ministries in the Amazon as a way to extend access to the sacraments in the remote parts of the South American rain forest that spans more than 2 million square miles.

At this stage, much of the small group work has concluded. Each of the 12 language groups this week discussed a version of the final document and shared feedback with the drafting commission. The final document is expected to be released and voted upon Oct. 26.

As the synod nears its end, Gauthier said it has already proven "transformational" for the church.

"Regardless of what the end document looks like, I know that the process was a changing process, and it was transformational for a lot of people that participated. And it's already transformational for the church, to be so relevant on such a timely topic as the Amazon, human rights, indigenous rights, ecological justice," she told NCR Oct. 23.

Gauthier, who was a part of the English and French language group, was surprised by how much convergence they shared. In discussions on ecological justice, she said her group, which included a number of people from outside the Amazon, examined how to raise consciousness back home about how lifestyle choices there, along with political and economic decisions, can directly impact the lives of others elsewhere in the world.

Similar themes were raised a day earlier in comments from Bishop Karel Choennie of Paramaribo, Suriname, another member of the English-French group, who said that people in the West want the Amazon nations "to keep the forest, but they don't want to change their lifestyles" that fuel the destruction. Lifestyle choices also were the focus at a documentary screening Oct. 23 just down the road from the synod hall that CIDSE organized with its member organizations in Italy (Focsiv) and Switzerland (Fastenopfer).

The film, "Energy to Change," is part of CIDSE's Change for the Planet-Care for the People campaign touting sustainable lifestyles. It explores six stories of individuals and communities around the world who made commitments to change their energy use and live more sustainably.

To drive the documentary's message home, a post-screening meal was served with biodegradable plates and utensils.

The profiles include Fr. Herman Augustyns, who ditched his car for a bike before leading a series of changes at St. Anne Parish, in Antwerp, Belgium and the Muduruku people of the Para state of the Brazilian Amazon who are fighting more than 40 hydroelectric dams along the Tapajos River where construction has destroyed areas they consider sacred.

"We treat nature not as a natural resource but as a sacred place. For us everything is sacred," said Nag Sateré, a panelist during a post-screening discussion and a member of the Coordination of the Indigenous Peoples of Manaus and Surroundings, or COPIME.

Sateré applauded efforts to develop more sustainable habits. She has worked to do the same with her own daughter, whether it's turning off lights or the water tap.

She said that being in Rome for the synod gives her and others from the Amazon "an opportunity to talk directly as indigenous people about our problems." She added that today protecting the Amazon begins with protecting indigenous rights.

Pablo Fajardo, a lawyer representing indigenous people in Ecuador fighting for reparations from Chevron for an oil spill more than two decades ago, said that many of the countries destroying the Amazon are based in Europe and North America.

"My plea is to join forces for the earth. Let's do real things making concrete decisions to pollute less and punish those who would profit from it," he said.

Sateré added that there is not blanket resistance in the Amazon to all industrial development, pointing to sustainable projects with solar panels and tourism. But any development, she said, must be done in consultation with local communities to ensure it does not harm nature nor impede them from living in some cases as they have for thousands of years.

A previous version of this story misstated the dimensions of the Amazon rain forest in square acres, rather than square miles.