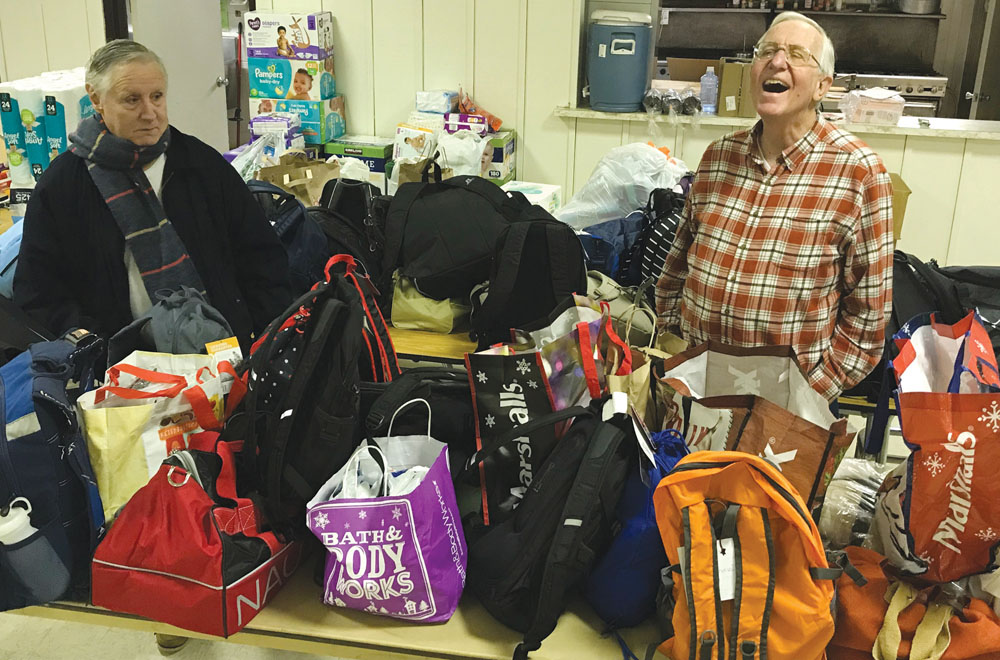 Jim Collins, right, and Greg Wright are pictured with new backpacks, filled with toiletries, clothes and luxuries, that arrived Nov. 29, 2018, for fellow parishioners at St. Thomas More Parish in Paradise, California, where some 640 of 800 community members lost their homes in the Camp Fire in early November. (CNS/Christina Gray, Catholic San Francisco)

Deacon Ray Helgeson left his home in Paradise on the morning of Nov. 8, 2018, with his wife, Donna, for daily Mass at the close-knit Butte County town's only Catholic church. They never arrived.

On the short drive to St. Thomas More Church, where the deacon assists at Mass and heads the parish's adult faith formation program, the Helgesons saw billowing smoke and a nearby peak in flames. They continued warily in the direction of the church but were soon intercepted by emergency crews, who diverted them from what would become California's most destructive wildland fire.

The Camp Fire burned more than 153,000 acres, destroyed more than 14,000 homes and caused 85 fatalities, with several people still reported missing as of Dec. 6.

The fire left more than 80 percent of Paradise residents, including the Helgesons, essentially homeless and had a devastating impact on St. Thomas More parishioners, with an estimated 640 losing their homes out of 800 on the official roster.

"This stuff really confuses you," Deacon Helgeson told Catholic San Francisco, newspaper of the Archdiocese of San Francisco. He made the comments in a Nov. 28 phone interview from his son's home in Citrus Heights outside Sacramento, a 90-mile drive from Paradise.

He and his wife arrived Nov. 8 with the clothing they wore to church that morning, a short supply of necessary medications and Deacon Helgeson's breviary. Like many residents, they have not been back to the fire zone, where recovery efforts are still underway, but have confirmed that their home is gone.

"Stability for human persons is huge and we don't have a place now to call home now," Helgeson said. "If your faith is weak, it's going to be extra tough."

St. Thomas More Church and School were spared, but the parish hall and rectory were gutted.

Many displaced people have found refuge in the college town of Chico about 22 miles from Paradise. A campus Newman Center located a block away from St. John the Baptist Church has served as the spiritual and organizational epicenter for the displaced from St. Thomas More. St. John the Baptist is one of two Catholic parishes in Chico.

Jim Collins is a St. Thomas More parishioner and retired educator who is acting as commander-in-chief of a relief and communications center set up in the Newman Center hall. Collins, a Grand Knight in St. Thomas More Knights of Columbus Council 7772, is one of the few parishioners whose house didn't burn.

"This is really Job territory," Collins said. "That imagery is perfect here."

Collins and a small crew of fellow Knights spend their days tracking down missing parishioners, communicating with family members about their safety and whereabouts, helping find housing for survivors, distributing donated clothing, money and gift cards, and raising money for long-haul recovery, he told Catholic San Francisco during a visit to Chico Nov. 29.

Collins pointed to rows of brand-new backpacks filled with toiletries, scarves and little luxuries. The included greeting card was signed by Deacon Dominic Peloso and his wife, Mary Ann Peloso, from the Church of the Nativity in Menlo Park.

"We're buried in backpacks!" Collins said. "Just this morning, we got all of these backpacks and $9,000 in gift cards from your archdiocese."

Fellow Knights Bill Vichi and Greg Wright are longtime St. Thomas More parishioners who arrived to help Collins. Nothing in their words or manner betrayed the fact that both were made homeless by the fire as they greeted Collins with back-slaps and jokes.

Vichi later shared that he lost everything.

Wright had even less reason to smile but did so easily and often. He was a renter without renter's insurance, among those worst off after a disaster because they lack resources to start over, Collins said.

"I will follow wherever the Lord directs me," Wright said.

Until Nov. 30, the Newman Center hall also served as an administrative home base for the Paradise parish. The effort was organized by St. Thomas More pastor Fr. Godwin Xavier, parish plant manager Greg Kidder and Deacon Helgeson. Kidder helped Xavier escape the rectory before it was destroyed and risked his own escape by taking the time to bring valuable parish records with them.

"Compared to what other people lost, mine is just little," said Xavier, who was installed at the parish only five months ago. "I don't care about that."

On Nov. 30, St. Thomas More parish administration and relief efforts moved to Our Divine Savior, a Catholic parish in north Chico, at the Sacramento diocese's direction.

Xavier said he intends to reintroduce the weekly night of "centering prayer" the parish offered each week in Paradise. "That could be healing," he said.

Zooba Zwicker, music director for St. Thomas More, and her husband, Clint Freedle, lost their home and his successful construction business in the fire. Still, she arrived to talk to Collins about music and logistics for the funeral of parishioner Larry Campbell Dec. 15. Campbell, who was terminally ill with cancer, escaped the fire with his wife but died two days later of a stroke.

Helgeson, who travels between Citrus Heights and his home parish three days a week for his pastoral duties, said the disaster has had its positive side.

"Something like this awakens something within us," he said. "It gives the Lord a chance to pull triggers within us of generosity, of kindness and of gentleness with others."

He said the fire and his faith have forged something new and unexpected in himself and other survivors.

"It's an awareness of being without, but there is also a sweetness to it," he said.

[Christina Gray is associate editor of Catholic San Francisco, the newspaper of the Archdiocese of San Francisco.]